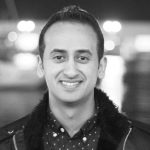 Waleed Alhariri heads the New York office of the Sana’a Center for Strategic Studies, from where he heads the center’s US-based operations generally, including research and project development, and authors the Sana’a Center’s monthly report “Yemen at the UN”. He is also a fellow-in-residence at Columbia Law School Human Rights Institute.

Waleed previously worked with the International Peace Institute in supporting the development of the Arab Forum for Citizenship in Transition project, was a researcher and monitor of political and human rights developments with Human Rights Watch following Yemen’s 2011 uprising, and was a member of the International Constitutional Court Project Ad Hoc Committee, chaired by former Tunisian President Dr. Moncef Marzouki.

Waleed holds a B.A. in political science and human rights from Hunter College, with a concentration in international relations and international human rights law. The primary focus of his studies was the constitutional design and transitional justice processes in Yemen.

As US President Donald Trump’s administration winds down, reports have emerged that Washington is once again considering the idea of designating the a…

Q&A with Anna Karin Eneström, Swedish Ambassador to the UN

Among the international community, Sweden has played an outsized role related to humanitarian relief, the peace process and gender issues in Yemen. Sw…

When the United Nations Security Council took a position on the Yemen war five years ago, it quite naturally supported the interests of some of its me…