In December 2018, 23 of Yemen’s leading socioeconomic experts convened in Amman during the Fourth Development Champions Forum to discuss economic confidence-building measures in the peace process in Yemen. The discussions at the Forum, which is part of the Rethinking Yemen’s Economy initiative, touched on a number of economic mechanisms that could be implemented to build confidence. These included supporting the Central Bank as an independent institution that serves all of Yemen; ensuring the deposit of public revenues in all governorates at the Central Bank headquarters in Aden; and opening ports and ensuring the free movement of goods, humanitarian aid and people between governorates. The Forum focused on the payment of salaries and pensions to all civil servants due to the critical importance of the issue; this policy brief presents the outcomes of this discussion.

As a key step to simultaneously address the humanitarian crisis in Yemen and build confidence between the parties engaged in the peace process, the Development Champions recommend that the Yemeni government resumes salary payments to all civil servants working in the administrative apparatus of the state registered in the Ministry of Civil Service database of 2014 across Yemen, prioritizing payments to education and health workers. The Yemeni government should also continue to provide liquidity to guarantee the payment of pensions to all public sector retirees. Meanwhile, Ansar Allah should allow all state revenues in areas under their control to be deposited into the accounts specified by the Central Bank of Yemen temporarily headquartered in Aden, and all parties should work toward the restoration of the Central Bank as a national institution that serves all of Yemen. The Development Champions call on regional and international donors to cover any funding gap to support the payment of salaries and pensions.

The government is the biggest employer in Yemen. Yemen’s public sector experienced rapid growth in the 1990s, when patronage was rife and political parties sought to win support by distributing jobs in the civil and military services. By 2014, the public sector payroll included 30.6 percent of the Yemeni labor force, as shown in Figure 1. This payroll was inflated, however, as it included significant numbers of “double-dippers”, who held more than one position and received multiple salaries, as well as “ghost workers”, who did not exist but whose salaries were collected by their supervisors. As shown in Figure 2, in 2017 up to 40 percent of the population was dependent on government salaries in the governorates of Marib, al-Jawf, Abyan and the Capital Secretariat (Sana’a). As a result, public sector salaries and pensions have accounted for a large share of the money supply in the macroeconomic cycle and the monetary and fiscal cycles. These payments also have a direct and indirect impact on multiple economic indicators, including the gross domestic product and the general state budget. 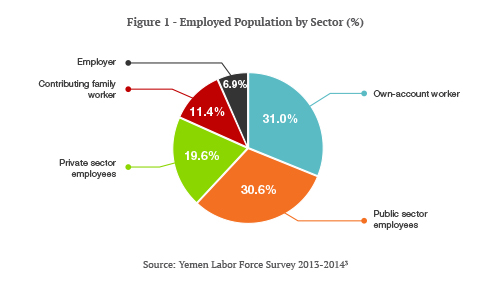 In September 2016, the payment of salaries for 1.2 million public sector employees was suspended amid a liquidity crisis. The same month, the Central Bank was relocated from Sana’a to Aden. Salary payments resumed in early 2017, but these were generally restricted to areas controlled by the internationally recognized Yemeni government. Since November 2018, payments of public sector pensions have been extended to reach all retirees in all areas of Yemen. Prior to this, pensions had been paid to around two-thirds of public sector retirees. 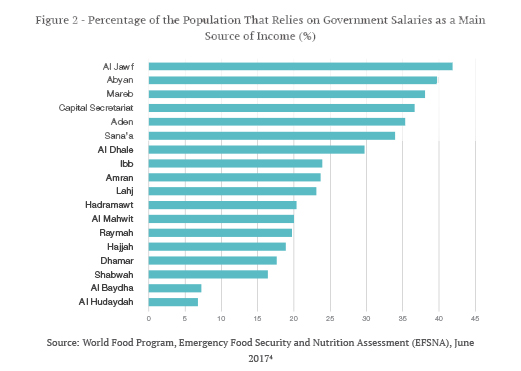 Due to the size of Yemen’s public sector, this has had catastrophic implications at a time when Yemen faces the worst humanitarian crisis in the world, with 10 million Yemenis on the brink of starvation, in part because they cannot afford food. Public Sector Workers often support large families or function as a safety net for entire villages, so the suspension of their salaries left millions of Yemenis without their main breadwinner and many more without anyone to turn to for a loan.

Meanwhile, the non-payment of teachers, doctors and nurses has deteriorated services in the health and education sectors.
Due to the interrelated dynamics at play in the Yemen conflict, economic issues are intertwined with security and political considerations, and addressing the economic crisis in Yemen is thus vital as a confidence-building measure to support the peace process. Progress toward economic stabilization would have positive implications in breaking the cycle of conflict. Crucially, resuming salary payments to public sector employees would improve immediate prospects for millions of Yemenis.

Overview of the Public Sector

In 2014, around 1.25 million people were employed by the government in Yemen, according to data from the Ministry of Civil Service and Pensions. Of these, 38 percent were employed in the state’s administrative apparatus, 52 percent in the military and security sectors and 9 percent in economic sector units (state-owned enterprises), independent and attached units, and special funds. 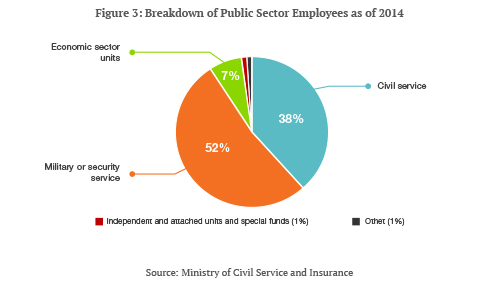 The majority of the 472,000 public sector workers in the administrative apparatus – 87.6 percent – were employed by local authorities, mostly in the education and public healthcare sectors. Of the roughly 653,000 people employed in the military and security sectors, 70 percent worked for the Ministry of Defense, while 28 percent were employed by the Ministry of Interior and 2 percent by the Political Security Organization.

Data from the General Authority for Social Security show that there were 123,000 pensioners in 2014, 88 percent of whom were male. This figure does not include pensioners who retired from the Ministries of Interior or Defense, for whom insufficient information was available.

Prior to the conflict, public sector salaries constituted one of the largest items in the state budget, accounting for an average of 32 percent of government spending between 2001 and 2014. In 2014, the budget item for public sector salaries amounted to 1.14 trillion Yemeni rials (YR), which at the time was equivalent to US$5.3 billion. This included YR546.9 billion to the civil service, YR430.2 billion to the military and security services and YR162.4 billion to the economic sector units. Meanwhile, the General Authority for Social Security and Pension spent YR64.8 billion in 2014 to pay pensions to retirees on its register. This did not come from the state budget, but was instead financed through deductions from civil servants’ salaries.

Impact of the conflict

The conflict has driven an economic collapse in Yemen. Interruptions to oil exports, which once made up half the state’s annual income, contributed to a sharp decline in government revenues. In addition, the remaining revenues, in particular customs and taxes, have been split between Ansar Allah and the internationally recognized Yemeni government.

In late 2018, the government approved a 30 percent pay rise for civil servants who were receiving salaries. This inflated the costs in the state budget at a time of limited public revenues and divided monetary authorities. Unless direct budget support is received from external grants and aid to pay civil servant salaries, the government salary bill will increase the budget deficit and risk the use of inflationary financing, like printing new rial banknotes and obtaining more overdraft financing from the Central Bank, thus further destabilizing Yemen’s economy.

After in-depth discussions, the Development Champions developed the following recommendations to respond to the salary crisis that has exacerbated the humanitarian catastrophe in Yemen:

Federalism in Yemen: A Catalyst for War, the Present Reality… February 28, 2019 Analysis