The conference offered a platform for a diverse range of Yemeni speakers and foreign experts to present their views and expertise on Yemen-related subjects and recent developments. Over 30 Yemeni speakers from across the political spectrum were invited to shed light on the five-year conflict, with Chatham House rules allowing for open and frank discussions.

Discussions dealt with Yemen’s internationalized civil war and the country’s multivariate crises, providing participants with objective assessments from nonpartisan experts as well as external and internal narratives of parties to the ongoing conflict. The conference further discussed the role of various local, regional and international actors involved in the conflict, while elaborating on the relations between these actors and their respective internal dynamics.

Speakers shed light on events taking place in underreported Yemeni governorates, such as Al-Mahra and Shabwa, the war economy in Yemen, as well as the possible scenarios and outcomes of the Jeddah Agreement. Other topics included a session on minorities in Yemen, a comparative approach on the role of poetry in the recruitment and mobilization processes in the AQAP and ISIS in Yemen, and a deep dive into the Houthi movement and Zaidism, among other subjects. Also covered were recent economic and humanitarian developments, prospects for peace, the human rights situation, and security threats posed by armed groups.

Beyond the educational and informational focus of the conference, the event served as a unique networking opportunity and a venue for Track II diplomacy between various actors.

Executive Director of Sana’a Center Maged Al-Madhaji said that the exchange remains one of the center’s most important projects. “It fits directly into our core mission of providing a platform for Yemeni voices and facilitating the dissemination of accurate information on the country as well as shaping the narratives on Yemen on all levels.” He noted that the Sana’a Center team was proud to have been able to hold the event in spite of the protests taking place in Lebanon and the ongoing conflict in Yemen.

The next Yemen Exchange will take place in the first quarter of 2020, with exact dates and the opening of the application period to be announced soon.

Here are some pictures from the Yemen Exchange sessions: 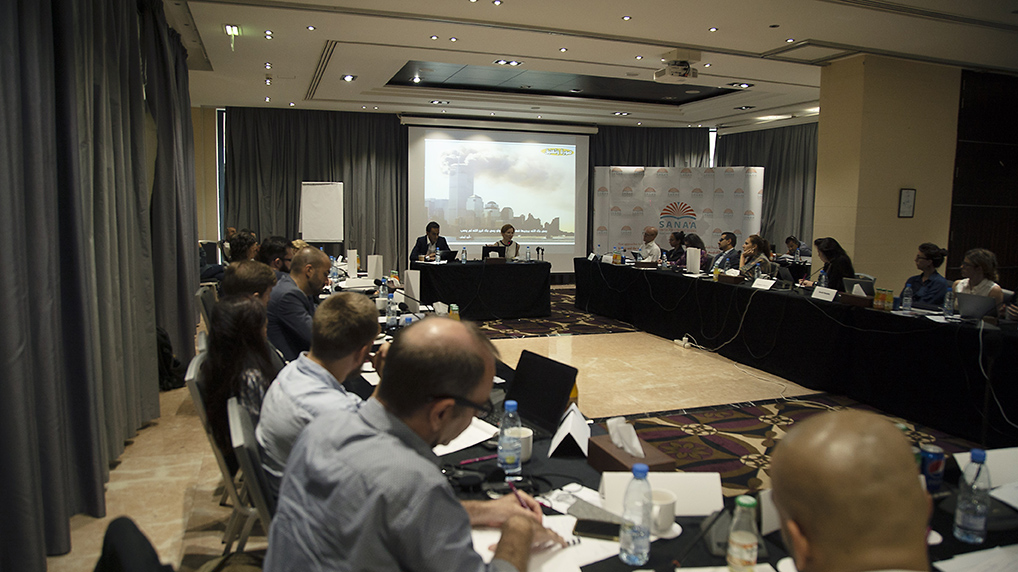 Senior Research Fellow in Arabic and Islamic Studies at the University of Oxford Dr. Elisabeth Kendall presented about the use of poetry by AQAP and ISIS to recruit and mobilize in Yemen. 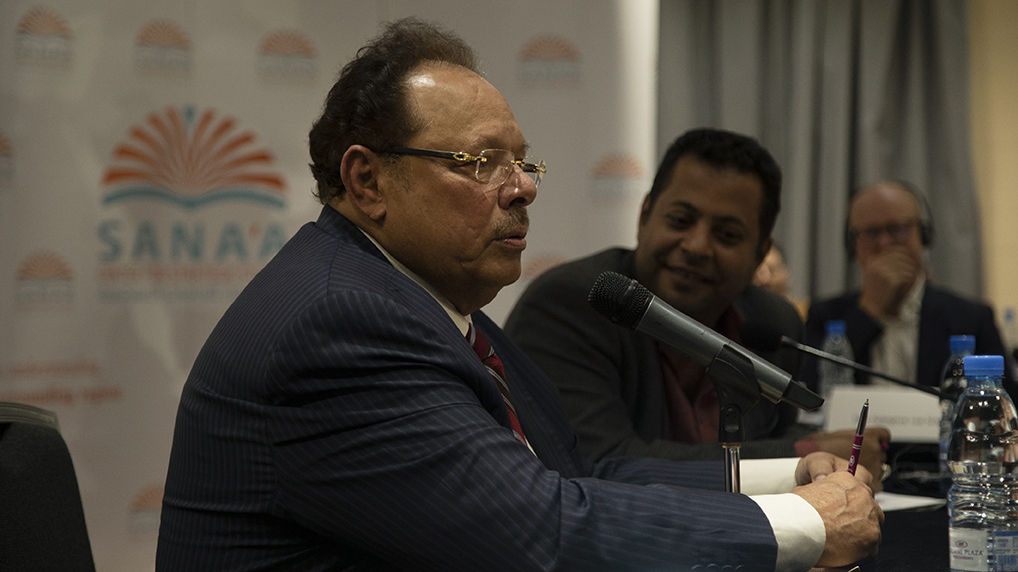 Former President of the People’s Democratic Republic of Yemen (PDRY) Ali Nasser Mohammad was one of the speakers at the fourth Yemen Exchange. 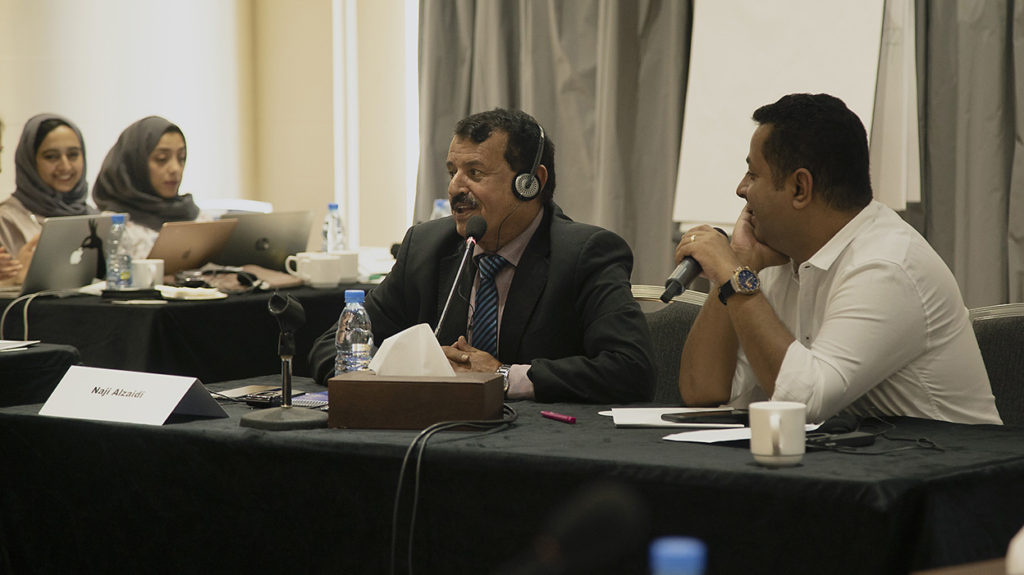 The fourth Yemen Exchange hosted a number of prominent local powerbrokers, including tribal sheikhs from Yemen. Sheikh Naji al-Zaidi (L), a Marebi sheikh and the former governor of Mareb, talked about the current political, economic, and social situation in his governorate. 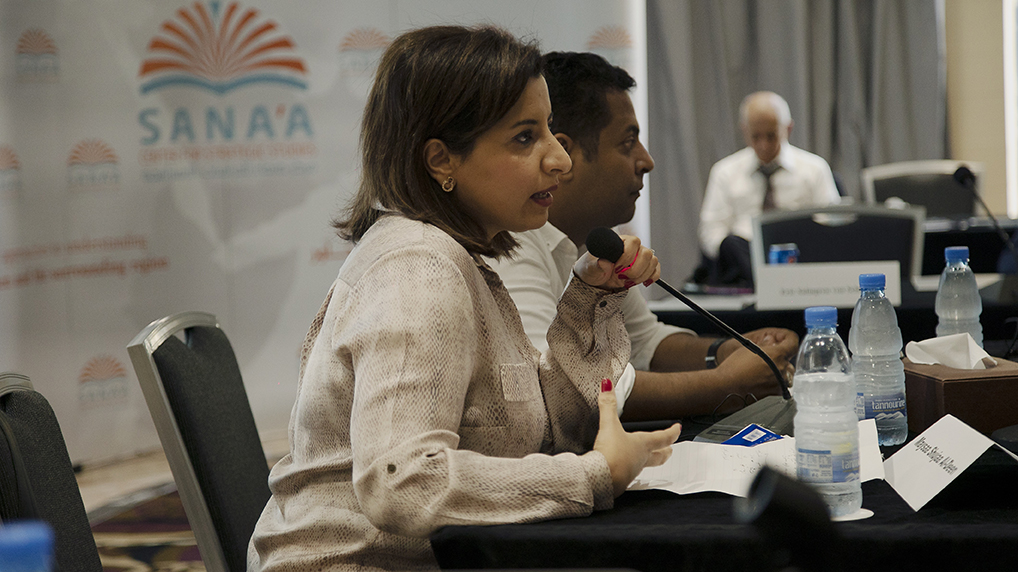 Maysa’a Shuja’a Al-Deen, a non-resident fellow at the Sana’a Center for Strategic Studies, spoke about the transformation of Zaidism in Yemen. 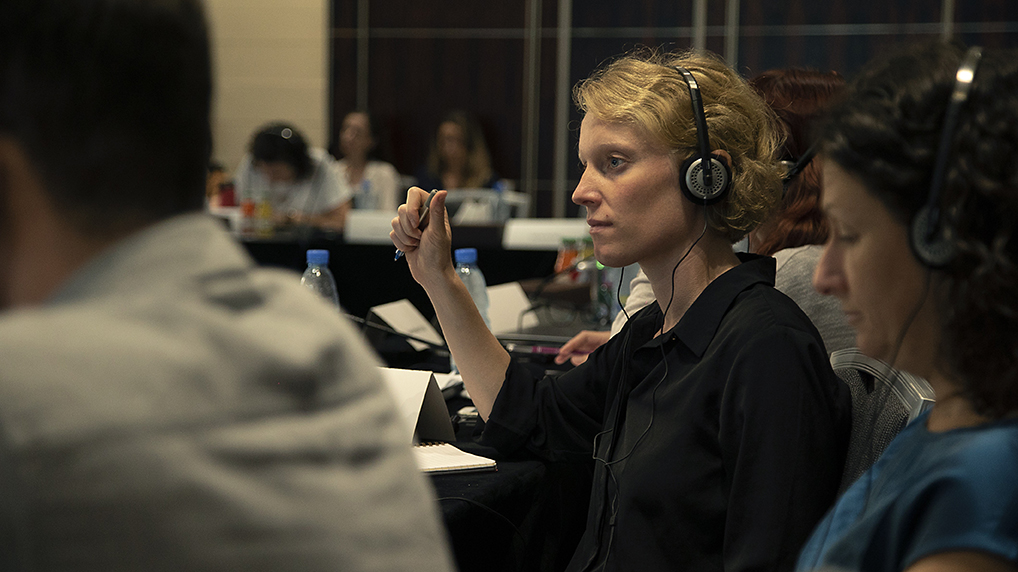 The fourth Yemen Exchange, which was hosted by the Sana’a Center and took place in Beirut, Lebanon between October 21 and October 26, 2019, brought together a number of journalists, scholars, and experts from various backgrounds. 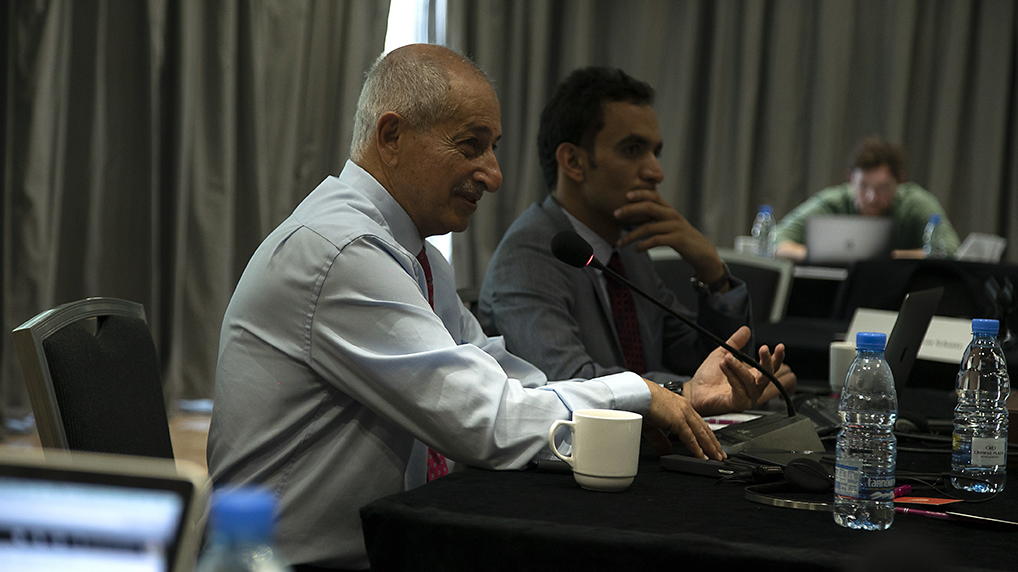 Mr. Abdulrahman Al-Eryani is the former Yemeni Minister of Water. He presented on the water crisis in Yemen at the fourth Yemen Exchange in Beirut. 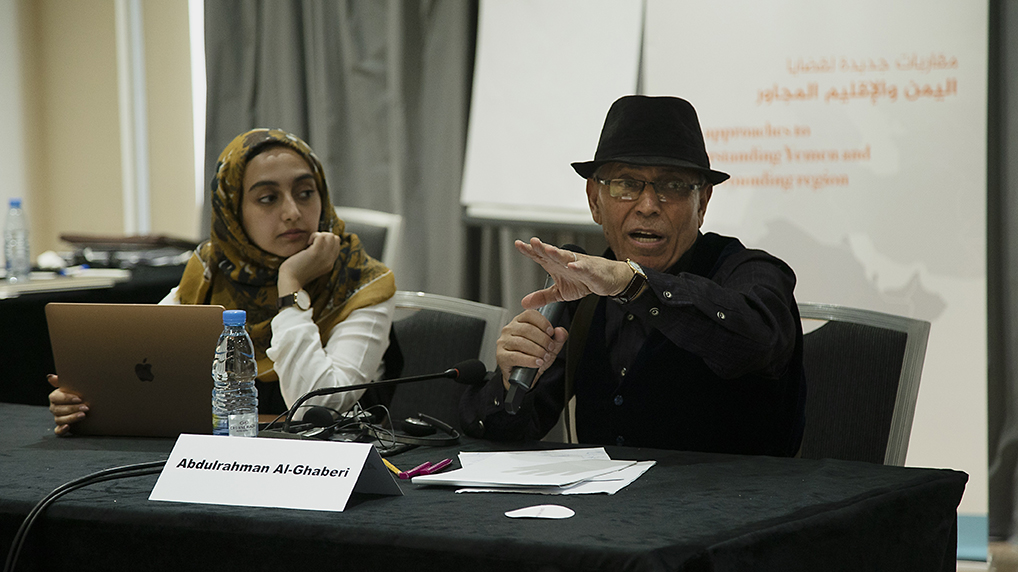 Abdulrahman Al-Ghaberi is Yemen’s most celebrated photographer. His photos document the historic moments and daily life in Yemen over the past three decades. His presentation showed pictures of Yemen taken over the past 30 years with subjects varying from its exotic natural beauty to the lives of women during the 1970s. 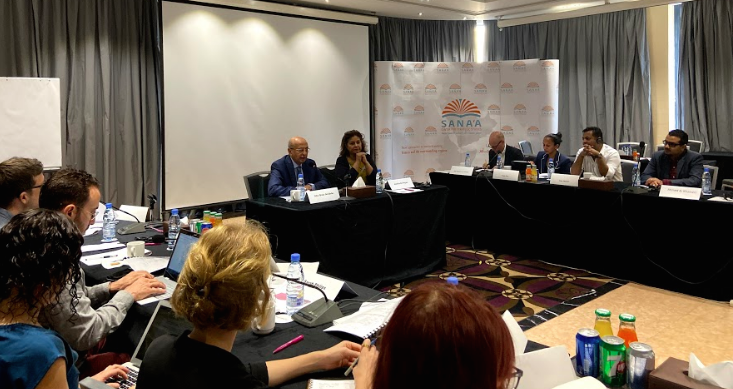 Dr. Abu Bakr al-Qirbi was Yemen’s Minister of Foreign Affairs from 2001 till 2014. He was also a member of the GPC negotiation team in the last two rounds of the UN-led peace talks. At the exchange, he talked about GPC’s perspective of current war. 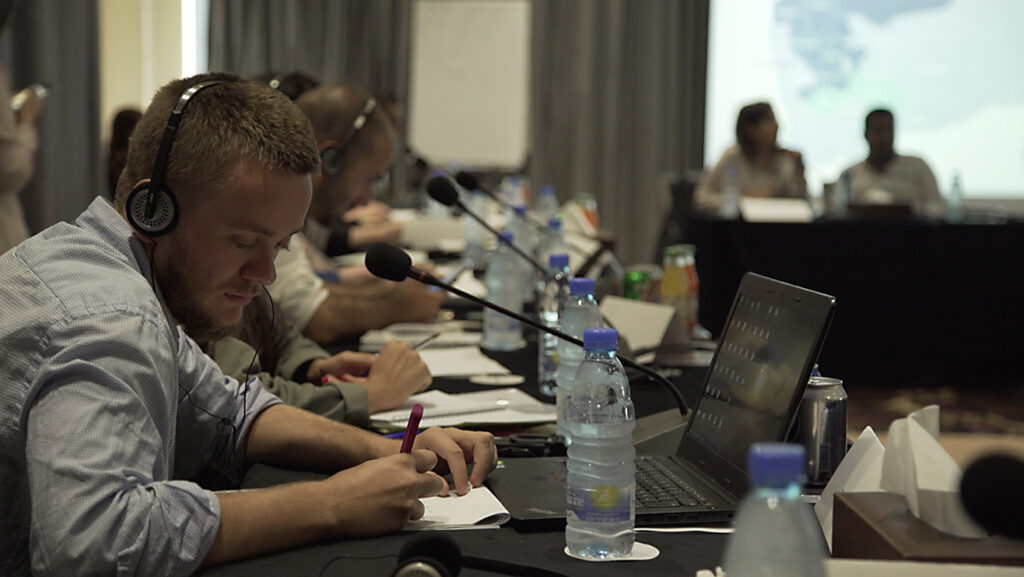 The participants of the fourth Yemen Exchange, which took place in Beirut,  hailed from all over the world. 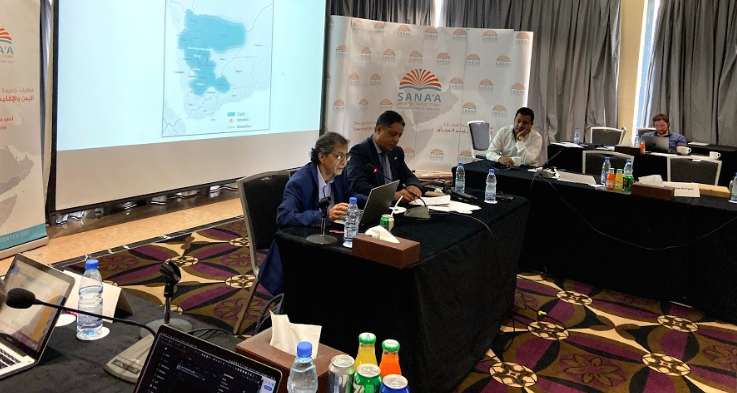 Ali Mohammad Zaid (L) who has conducted research on Yemen’s minorities for decades. His presentation at the fourth Yemen Exchange focused on the history and reality of the minorities in Yemen. 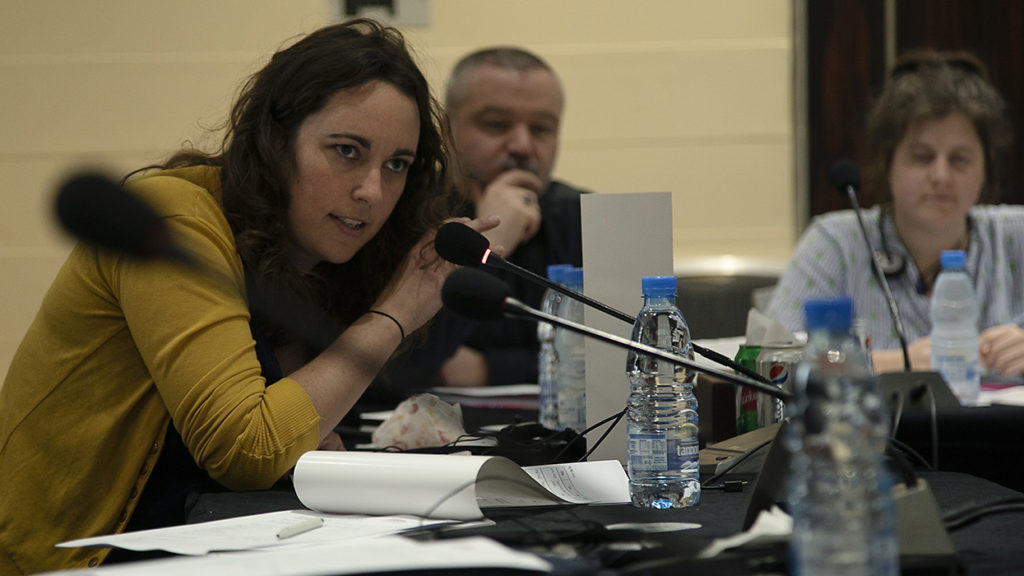 One of the participants leans over to address a speaker at the the fourth Yemen Exchange, which took place in Beirut between October 21 and October 26, 2019. 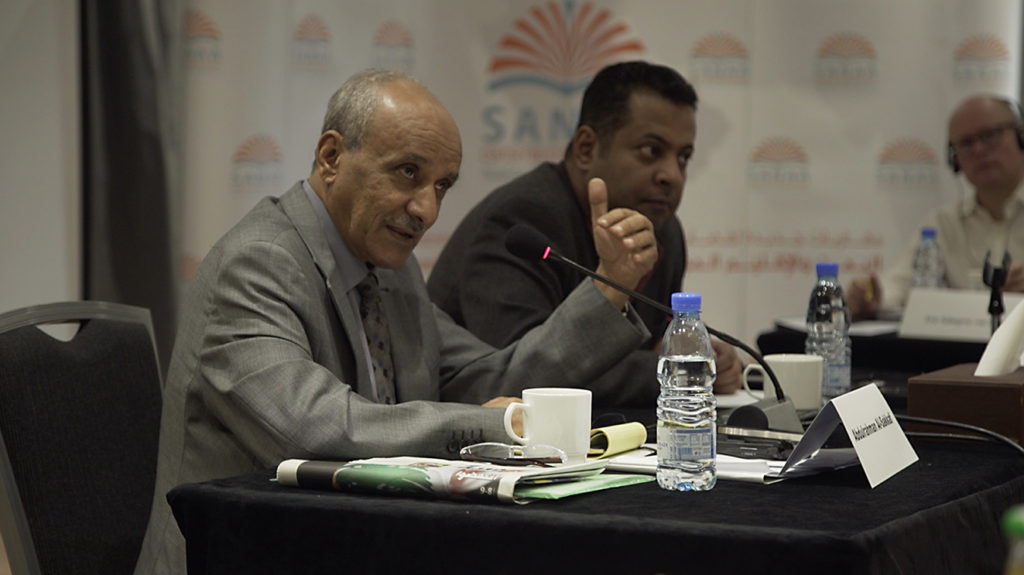 Abdulrahman al-Sakkaf is the general secretary and one of the most senior leaders in the Yemeni Socalist Party. In his presentation, he discussed the socialist party’s perspective on the war and its vision for the future of southern Yemen. 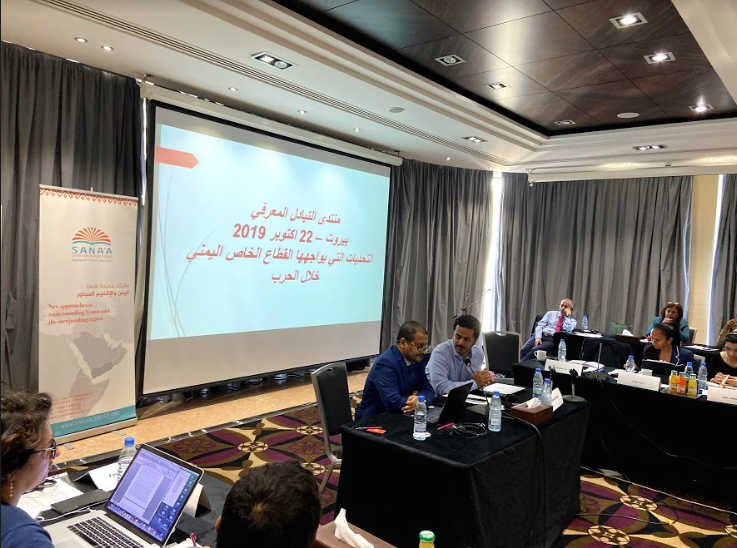 Speakers Ali al-Hebshi (L) and Rafat al-Akhali (R) talk about the challenges the private sector faces in Yemen during the conflict and the economic impact of the war. Hebshi is a Yemeni businessman, while Akhali is the former minister of Youth in Yemen. 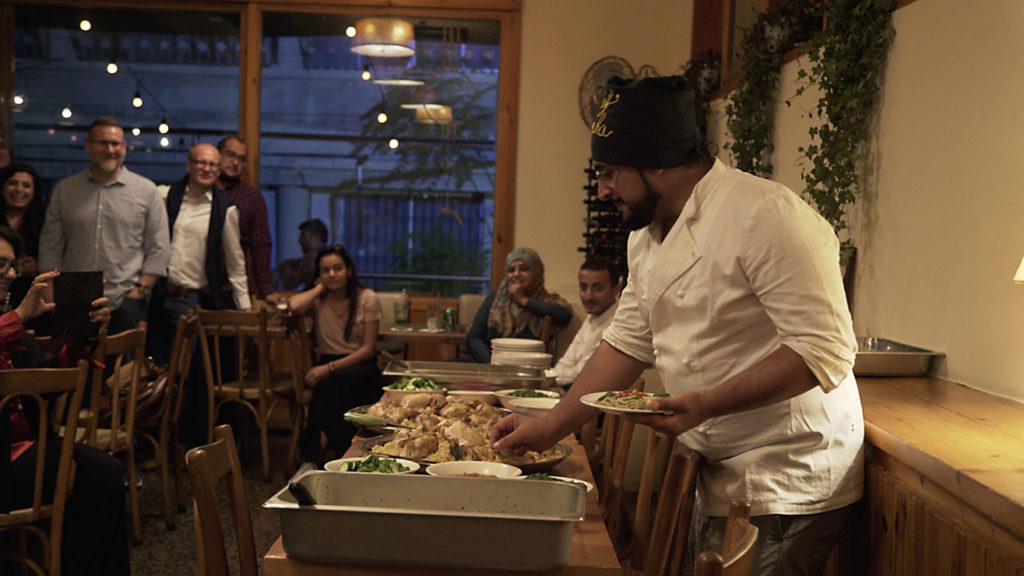 Yemeni chef Taha al-Jalal introduced participants to traditional Yemeni food where they had the chance to chat, mingle, and get to know one another while sampling the best that Yemeni cuisine has to offer.

The Sana’a Center Editorial The Brinksmanship of a SAFER Dis…
October 14, 2019 The Yemen Review

How Yemen Brought Saudi Arabia and the UAE to the Brink of D…
October 2, 2019 Analysis

Seen Only in a Saudi Shadow: Why the US Misunderstands and M…
October 1, 2019 Analysis