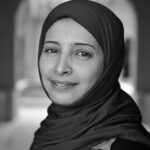 Bushra Al-Maqtari is a researcher with Sana’a Center, a journalist and a novelist.

Bushra was awarded the Johann Philipp Palm Award for Freedom of Speech and Press in 2020 and the Françoise Giroud Award for Defense of Freedom and Liberties in 2013.

A German translation of her book “What You Have Left Behind: Voices from the Land of the Forgotten War” was published in 2020, originally published in Arabic by Riad El-Rayyes Publishers in 2018. Her writings have been published in various newspapers and periodicals, including The New Arab, New York Times, and Gulf House for Studies and Publishing.

Many of her studies have approached the 2011 uprising and Yemeni left. She authored “Behind the Sun,” a novel published by the Arab Cultural Center, and co-authored “South Yemen Under the Left” with Lebanese intellectual Fawaz Traboulsi.

Yemen’s Socialist Party and the Fragmentation of the Yemeni Left

Yemeni political parties have performed dismally in recent decades. This has both spurred, and been spurred on by, the failure of politics in general …

The evolution of militant Salafism in Taiz