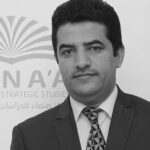 Mansour Rageh is chief economist at the Sana’a Center for Strategic Studies and has held various managerial and policy positions at the Central Bank of Yemen (CBY) since 2003.

Rageh’s current duties at the CBY include Manager for Islamic and Specialized Banking On-site, and he is a member of the Digital Financial Services Working Group representing the CBY internationally at the Alliance for Financial Inclusion.

He has consulted for numerous firms in Yemen and abroad, including the World Bank’s International Finance Corporation and Yemen’s Social Development Fund.

Rageh holds a master’s degree in policy economics from the Center for Development Economics at Williams College, Massachusetts, US, and a bachelor of science in banking & Finance from Ibb University, Yemen.

Since Rageh’s assignment as deputy governor assistant for foreign banking operations at the Central Bank of Yemen in 2017, he has suspended his work at the center until further notice.

Yemen Without a Functioning Central Bank: The Loss of Basic Economic Stabilization and Accelerating Famine

The imminent critical threats to the Yemeni riyal and government institutions

In whatever post-conflict scenario eventually prevails in Yemen, the domestic currency and the institutions of state will be essential to the re…