Al-Bayda Governorate: Too Strategic to be Forgotten

Al-Bayda is often forgotten. It is a vast area of Yemen where little is visible other than poverty and powerlessness, which have worsened during the war. It generally receives little attention among Yemen observers and monitors, except when it comes to Al-Qaeda. Recently, however, Al-Bayda has emerged as a central arena in the battle between the Houthi movement and its opponents.

Al-Bayda borders eight other governorates: Shabwa, Al-Dhalea, Abyan and Lahj to the south, and Marib, Sana’a, Dhamar and Ibb to the north. Its strategic location, providing access to many areas of the country, makes Al-Bayda decisive to the current conflict between the Houthis and the government.

The Houthis, thanks to their military strength, secured control of the governorate in 2015 despite initial local resistance, which was crushed because it was scattered and received no support. For years, there was little conflict in the governorate. Initially, the Houthis relied on their alliance with the General People’s Congress and former President Ali Abdullah Saleh, who had great influence on tribes there. Later, they reached agreements by force with local tribes to avoid engaging in open conflicts in exchange for letting the tribes manage their own affairs.

The Houthis’ strategy in dealing with Al-Bayda tribes is based on two elements: mobilize supporters from among tribes (particularly Hashemites who, like the Al-Houthi family, trace their lineage to the Prophet Mohammed) and render neutral tribes that are not loyal to them. This arrangement has guaranteed that tribal blocs that are not loyal to them are neither hostile toward them nor supportive of the government, and it allows the Houthis to freely move in the governorate and control it.

One of the most important agreements the Houthis struck was with the Al-Awad tribe, which is large, prominent in the governorate and traditionally hostile to the Zaidi imamate. Sheikh Ahmad Abdo Rabbu al-Awadi is one of the tribe’s most notable members. He emerged as a charismatic leader during the Yemeni civil war after the 1962 revolution that overthrew the Zaidi imamate and played a decisive role in ending the siege imposed by the royalist forces on Sana’a in 1968.

The Houthis also reached an accord with the combative Qifa tribes, which are known for their opposition to authority and engaged in a bloody conflict against the Houthis at the beginning of the war. This confrontation with the Houthis was costly, and the government appeared unwilling to provide the necessary support – it did not even prioritize Al-Bayda in its strategy for confronting the Houthis. As a result, the Qifa tribes eventually settled with the Houthis.

Neutralizing the Qifa tribes after their bloody conflict was significant, but the other challenge for the Houthis was dealing with the Al-Awad tribe via a deescalation deal. Al-Awad tribe extends into Marib and is present in Al-Abdiyah district adjacent to Al-Bayda. The tribe’s bloc in Marib maintained a hostile position against the Houthis while the tribe’s bloc in Al-Bayda remained neutral and away from the conflict. Likewise, tribes in Al-Bayda’s Al-Malagem and Al-Sawadiyah districts did not want to engage in a futile conflict with the Houthis without any guarantees that the government would provide continuous, unqualified support, and thus remained neutral. So, the tribal situation remained under control, except for the Humaiqan, which includes a Salafi presence, and has fought the Houthis ever since the war erupted on ideological grounds.

Meanwhile, the Houthis have managed an interesting relationship with the Islamic State (IS) group, which has a presence and positions in Al-Bayda. There appears to have been an implicit agreement between the groups to not attack each other. While cautious of one another, the situation has remained stable with no confirmed reports of IS targeting Houthi fighters or vice versa. IS, however, has attacked the national army. For example, it detained four people in the Yakla area because they were headed to join the army and broadcast footage of their execution on September 11, 2018.

The Houthis’ relationship with Al-Qaeda in the Arabian Peninsula (AQAP) does not seem as stable, though the Houthis have tended to avoid targeting it, focusing on maintaining calm. Al-Qaeda and IS camps are present in isolated areas of Al-Bayda, specifically in mountainous ranges between Al-Bayda and Abyan and Shabwa governorates. Al-Qaeda also has a limited presence in the district of Wald Rabi’. Some Al-Qaeda members belong to conservative tribes and this has helped the group operate within the governorate’s social fabric. Meanwhile, IS, with its hardline beliefs and many non-Yemeni members, is viewed as a stranger, and the group’s relationships with tribes have witnessed extreme and regular tensions.

Al-Bayda governorate is implicitly and unofficially divided into two blocs. One is centered around Al-Bayda city and its surroundings, and another around the city of Rada’ and its surroundings. Rada’s particularity is that it is a sectarian frontline as its tribes are Sunni while its tribal neighbors in the Dhamar governorate belong to the Zaidi sect of Shia Islam. These tribes, while not necessarily religious, have a strong sense of religious identity. This was also formed in part by past invasions of Al-Bayda by Zaidi imams, which have been immortalized in Al-Bayda tribes’ zawamel, the folk songs that inspire fighters ahead of battle.

Therefore, Al-Bayda represents more hostile territory to the Houthis compared to most other governorates. Except for some communities with a Hashemite identity, including Riyam, outside Rada’, and Al-Saqqaf in Al-Sawadiyah, the majority of residents do not have anything in common with the Houthis. Rather, there is a history of enmity and subjugation associated with Zaidi rulers.

It is notable that the Houthis, after entering Sana’a in September 2014 and while still on good terms with President Abdo Rabbu Mansour Hadi, marched toward Al-Bayda to seize it before heading to Aden, Taiz, Hudaydah or any other governorate. The Houthis’ military prioritization of Al-Bayda revealed the governorate’s strategic importance as well as the Houthis’ awareness of Al-Bayda’s history of rebellion against the center and lingering animosity. Hence, subjugating Al-Bayda was a priority. Doing so also brought the Houthis into an alliance with Saif al-Qabli, a prominent sheikh now living in Oman who fought with the Imamate during the civil war between the royalists and republicans. 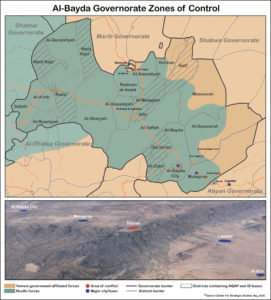 Battles in Al-Bayda have been fiercest in the area of Qaniyah, in the district of Radman al-Awad bordering Marib governorate. These battles began in 2018, but have increased in intensity and frequency since government forces began advancing slightly on this front in April. The government offensive coincided with Houthi forces’ pressure on frontlines in Marib, and thus the Al-Bayda front became important in blunting the Houthis’ surge toward Marib by keeping them busy in Qaniyah.

There are also battles in the Humaiqan area, part of Al-Zahir district adjacent to Lahj governorate, and in Mukayras district adjacent to Abyan governorate. The continuous battles since 2015 in the Humaiqan area tend to resemble gang warfare against the Houthis more than a comprehensive military confrontation. The Qifa area of Al-Bayda, specifically surrounding Yakla, has seen a fragile, intermittent calm.

However, the government thus far has failed to achieve a major breakthrough in any Al-Bayda battles because there is no strategy to mobilize tribes and push them to rebel against the Houthis. This is due to several factors, most notably the tribes’ distrust of the government and coalition to provide real support, fearing that they will be left again to face the Houthis alone.

Recent events, however, between the Al-Awad tribe and the Houthis have threatened to explode into a full tribal rebellion. Tensions between the two in 2018 reemerged when Houthi forces killed a woman, Jihad al-Asbahi, from a neighboring tribe during a raid on her home in April. The incident sparked anger and tension; in Yemeni society and according to tribal customs, killing women is a shame requiring justice no matter the cost.

Al-Ashabi’s family appealed to the Al-Awad for help in receiving justice. This incident encouraged calls for rebellion against the Houthis – one that the coalition and the government failed to create and that the Houthis brought upon themselves. Still, it represents the best opportunity to change the formula in Al-Bayda and creates a real challenge to Houthi control of the governorate.

The Houthis have displayed flexibility – negotiating rather than resorting to swift military action – when dealing with this case for several reasons. First, this case socially exposes them for committing a grave violation according to tribal society. Second, the Houthis need Al-Bayda to stay calm as its strategic significance is more important than any temporary display of prestige and power. As of the end of May, tribal mediation was continuing between Al-Awad and the Houthis to reach a settlement, or at least postpone any clash.

While it is not assured that a tribal rebellion will erupt against the Houthis or that the government will succeed in advancing from the outskirts of Al-Bayda to its heart, what is certain is that the Houthis do not want to risk losing this governorate. For the government, taking Al-Bayda would represent a turning point in the conflict. Al-Bayda overlooks the governorate of Dhamar, south of Sana’a, and if the government controls Al-Bayda, it will be able to pressure, and perhaps cut, Houthi supply lines toward fronts in Ibb, Taiz and Al-Dhalea. Al-Bayda would also give the government a direct path to join the Damt front in Al-Dhalea governorate and pressure Houthi forces there. It also would block the Houthis’ chances of threatening the southern governorates of Shabwa and Abyan. The uniquely strategic location of Al-Bayda grants whoever controls it the keys for escalation and deescalation on open fronts in eight different governorates. But controlling it, as both sides know, requires strategies responsive to tribal interests.

Maged Al-Madhaji is a co-founder and executive director of the Sana’a Center for Strategic Studies. He tweets at @MAlmadhaji.

Abyan Battles to Determine Fate of the Riyadh Agreement
May 22, 2020 Analysis