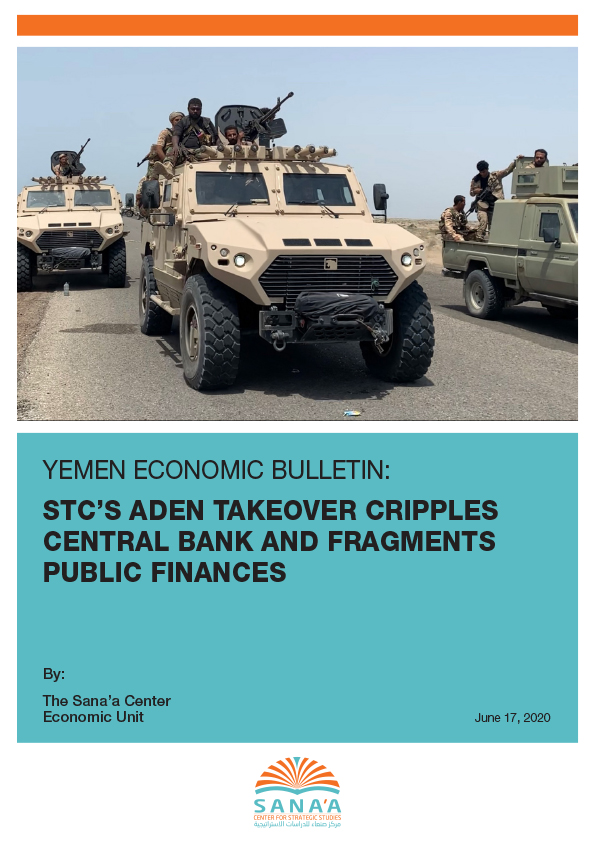 On 25 April, the Southern Transitional Council (STC) declared emergency self-rule across all southern Yemen in a direct challenge to the authority of the internationally recognized Yemeni government. This assertion of influence was quickly shown to be overly ambitious, with various southern governors rejecting the STC declaration and Yemeni government forces fighting back. The military and security situation in the south thus fractured, with the STC and affiliated forces in the west, government forces to the east, and the two clashing in Abyan governorate in the middle.

Importantly, the STC solidified control over Aden – which had been both the interim capital and financial hub of the Yemeni government – and brought key public institutions under its control. The fourth article of the STC self-rule declaration announced structures that seemed to mimic those the Houthi’s Supreme Revolutionary Committee has deployed to impose control in Yemen’s northern areas, with the STC announcing the formation of oversight committees to “monitor performance” and “combat corruption”. This has included appointing loyalist officials to management positions in state institutions, according to a source aware of the proceedings.

Ahmed Bin Breik, Chairman of the Southern Self-Administration Committee, issued a decree mandating all state institutions and administrative apparatus in southern governorates deposit their revenues into an STC-controlled consolidated account at Bank Al-Ahli Al-Yemeni, otherwise known as the National Bank of Yemen (NBY). On May 5, the STC ordered public customs and tax offices operating in the Free Zone, Al-Mualla and Al-Zait areas of Aden port to deposit revenues at NBY instead of the Aden central bank, where they are legally mandated to go. In enforcing the redirection of public revenues, the STC closed the central bank offices at the Aden port facilities, confiscated YR639 million worth of existing customs and tariffs, and transferred these to NBY.

The STC chose NBY to act as the state treasury for their so-called “Self-Administration” office due to its deep roots and extensive networks across southern Yemen. Established as a fully state-owned entity in 1969 in what was then the People’s Democratic Republic of Yemen (also known as South Yemen) through the nationalization of all the foreign bank branches operating in the south at the time, NBY is the only Yemeni commercial bank headquartered in Aden, with 23 branches across the south and four in the north. Notably, Mohammed Halboub, who was appointed NBY’s chairman of the board in 2017, is a prominent supporter of southern secession.

While the central bank building itself in the Crater district of Aden remains nominally under the Yemeni government’s control, with Saudi soldiers stationed inside the compound and STC-allied forces guarding the perimeter, whether it is able to function properly and in accordance with its own by-laws remains questionable. One of the central bank’s primary functions is to act as the treasurer and implementer of the state budget, and the STC – through its military takeover and declaration of self-rule – has partially appropriated this function from the central bank and given it to NBY. In violation of the CBY’s legally mandated autonomy, Ahmed Bin Breik, the head of the STC’s Self-Administration board, on May 13 signed a decree ordering central bank vice governor Shakib Hubaishi to transfer YR4.5 billion to a money exchange company to pay the salaries of STC-affiliated military forces, according to a source aware of the interaction.

According to a well-placed banking official who spoke on condition of anonymity, the central bank in Aden is still carrying out other primary functions free of direct STC intervention, including the management of foreign currency reserves to support import financing. However, the central bank’s ability to maintain a degree of monetary stability depends heavily on its ability to make the major players in the foreign exchange market – such as commercial banks, money exchange firms and commodity importers – abide by its circulars. Many of these major market players in southern Yemen operate from Aden, Lahj and Al-Dhalea, governorates where the STC has seized control from the Yemeni government, meaning central bank staff responsible for currency market regulation in these areas currently face daunting difficulties, thus limiting the central bank’s ability to maintain price stability.

The Yemeni government ordered the official CBY headquarters relocated from Sana’a to Aden in September 2016. Since then there have been two central banks in Yemen competing for national purview, with the Aden branch leveraging its international recognition and the Sana’a branch its influence over the country’s largest financial hub. As this rivalry for monetary control between the two has intensified it has increasingly undermined the overall Yemeni rial-based currency system and spurred a migration toward the use of other currencies – primarily Saudi riyals and US dollars – for financial transactions inside the country. A major acceleration in this process came in January this year when the Houthi authorities banned newly printed currency bills issued in Aden from circulating in areas they control, prompting an increasing disparity in the Yemeni rial’s value between northern and southern areas: as of June 15, the exchange rate in Sana’a was YR625 per US$1 while in Aden it was YR755 per US$1.

The STC’s establishment of its own Supreme Economic Committee (SEC) on May 11 intensified the economic fracturing as this entity appears to be a direct counterpoint to the National Economic Committee established by the Hadi government in August 2018. While the framework of the SEC is still unpublished, all indications are that its main duties include the management of monetary and fiscal policies, which would mean the CBY would face competition in carrying out the primary functions for which it is mandated to be the sole arbiter. The SEC declared in its first public statement on June 13 that it will disallow the Aden central bank from issuing to market any new rial banknotes, arguing such a move was necessary to rein in recent deterioration in the YR-US$ exchange rate. On the same day, STC-affiliated forces seized seven containers filled with newly-printed bills as they were being transported from Aden port to the CBY building, with the money then being taken to an STC military compound. A source at the central bank confirmed that some YR60 billion in banknotes, worth almost US$80 million, was seized. In May the Aden central bank had received a shipment of roughly YR110 billion in newly-printed banknotes from the Russia-based Goznak Printing Company.

On the fiscal side, during the conflict the Houthi authorities have been largely successful in collecting available public revenues in areas they control, while the Yemeni government has faced challenges, having failed to bring all central bank branches in areas it nominally controls under one umbrella. For instance, the Marib branch has yet to be fully connected to the Aden central bank’s electronic terminal system, limiting monitoring, while also failing in its obligation to transfer all excess liquidity to the central bank headquarters. Meanwhile, central bank branches in the governorates of Hadramawt and Al-Mahra operate somewhat independently from the center in many aspects related to state budget implementation. As a result, these governorates have largely maintained de facto control over locally-generated revenues that should be under the government’s purview, instead channeling them for use by the local authorities and facilitating self-governance in these areas. Such actions clearly contradict the Local Authority Law of 2000 and – absent the Yemeni government addressing the practice with new regulations – appear to be creating new facts on the ground that will likely play into any future negotiations regarding a new federal structure for Yemen, which some prominent observers see as an inevitable outcome of the war.

The Yemeni government’s monetary leverage has been challenged and its fiscal capacities compromised for years; the STC’s self-rule declaration and takeover of Aden has undermined the government’s position even further.

Immense new economic stressors have also emerged in parallel. Various financial experts and Sana’a Center economists are forecasting a massive drop in remittances, Yemen’s largest source of foreign currency, due to the COVID-19-related economic contraction in Saudi Arabia and elsewhere. International aid agencies are carrying out large-scale reductions in their Yemeni operations due to funding shortfalls, meaning hundreds of millions fewer dollars entering the country. The slide in global oil prices since March has dramatically reduced the value of the country’s only significant export and the Yemeni government’s largest revenue source. These developments, in conjunction with the STC seizing control of state revenue sources in Aden, will erase most government budget revenues and likely force massive public payroll cuts.

Over the last two years, the Aden CBY has also overcome many challenges with generous bilateral support from Saudi Arabia. In particular a US$2 billion Saudi deposit at the central bank in 2018 has supported the CBY’s import financing mechanism and letters of credits scheme, undertaken in cooperation with the banking sector to secure and essentially subsidize consistent inflows of essential food commodities to Yemen. This has played a vital role in economic stabilization and containing the humanitarian crisis through stabilizing per capita purchasing power, which is mostly correlated to the rial’s value. In exchange for selling foreign currency from the Saudi deposit, the CBY has received liquidity in Yemeni rials, which have been used to finance the government’s high deficit and help curb impulsive monetary expansion (ie. printing new banknotes) to cover budget shortfalls. Thus the Saudi deposit has also been a crucial source of public funding.

The Saudi deposit, however, is soon to be exhausted, with the remaining reserves insufficient to cover two months worth of imports. The Aden central bank had already entered a foreign currency reserve crisis prior to the STC declaration of self-rule. The effective coup by the southern secessionists is a major blow to the Riyadh Agreement – the Saudi sponsored deal in November 2019 to mend the STC-Yemeni government rift – and has created circumstances that will discourage Saudi Arabia from replenishing its foreign reserve support. The security situation in southern Yemen is fragile and the Aden central bank is crippled. Yemen’s northern neighbor is also in the midst of its own massive budget cuts and no other international donor appears eager to step forward and take Riyadh’s place.

There has been little indication since the STC declaration of self-administration that the Yemeni government will be able to secure its authority in the city in the near future. The prospects, therefore, for keeping its central bank operating in the city are also dim. If the Riyadh Agreement becomes an irredeemable failure, Ataq in Shabwa governorate or Sayoun in Hadramawt would appear to be the most viable options for relocating the central bank headquarters, though as of this writing the Yemeni government has put forward no plan by which to carry out such an operation.

Notably, there had been minimal planning preceding President Abdo Rabbu Mansour Hadi’s 2016 decree ordering the central bank headquarters relocated from Sana’a to Aden, a hasty decision that temporarily eviscerated the central bank’s ability to carry out its basic functions. For instance, it was only in late 2017 that the central bank regained functional access to the SWIFT network and was able to carry out international financial transactions. In the years since the Aden central bank has undergone a series of institutional, technical and human resource overhauls to build back its operational capacities; relocating it again would be immensely arduous, even without the pandemic, and its functionality would almost certainly be undermined for several years.

Thus, the Yemeni government-controlled central bank faces the very real prospect of shortly having no place to operate from and almost no money to operate with.

Al-Bayda Governorate: Too Strategic to be Forgotten June 4, 2020 Analysis

Abyan Battles to Determine Fate of the Riyadh Agreement May 22, 2020 Analysis