Yemen’s fertile wadis that flow down from the mountainous areas on the west coast have been an essential lifeline for a population that has relied on its water for agricultural production for millennia. Farmers on the Tihama plains, which run along the Red Sea coast of the Arabian Peninsula, grow many types of vegetables and fruits as well as cereals such as sorghum, and keep livestock along the rivers that are used for irrigation. Among the distinctive trees grown in this area of Hudaydah governorate – as well as the governorate of Hadramawt – are date palms. From 2008 to 2012, Yemen harvested roughly 57 metric tons of dates from more than 4 million date palms, making it a strategic food security crop. The palms, known as the Phoenix dactylifera L., grow in dozens of varieties, better known as cultivars, and their dates have high nutritional value from their fibers and sugar. Growing date trees requires maintenance, specialized knowledge and access to water and equipment.

Over the past decade, the date farmers have struggled with multiple challenges. Pests such as the red palm weevil and plagues of locust have festered in the plantations. Increasing desertification, induced by climate crises, and invasive plant species have taken their toll on the water sources needed to grow date palms. A sharp decline in production has occurred during the current war, with estimates that roughly half the four million palms have been lost since the start of the conflict. These are significant numbers considering that food insecurity has contributed to pushing millions of Yemenis to the brink of starvation. 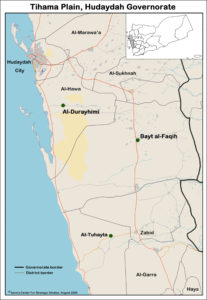 Loss of Plantations Visible from Space

We at Bellingcat, an open-source investigative journalism collective, investigated the decline in date plantations using open-source data and satellite imagery and found that, indeed, at three major areas known for date plantations on the Tihama plain, a decline in vegetation could be seen over the past three years. Based on a 2019 article by the Yemeni environmentalist group Holm Akhdar, we identified the locations which reportedly were hit the hardest. The planting scheme of the plantations, seen through high-resolution imagery from Google Earth Pro/MAXAR, allowed us to identify farms. The next step was analyzing the change in vegetation and leaf cover at these plantations over the past three years with medium resolution imagery from Planet Labs, a commercial company, and the Sentinel-2 satellite images from the European Space Agency, which is freely available through the Sentinel Hub website. In the areas of Al-Durayhimi, Bayt al-Faqih and Al-Tuhayta, Hudaydah governorate, hundreds of plantations have been affected. Satellite imagery showed the change in vegetation cover at the date plantations over time while high-resolution imagery verified the loss and disappearance of date trees at specific locations. 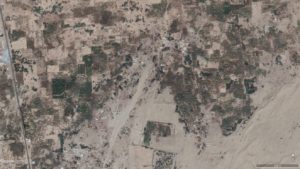 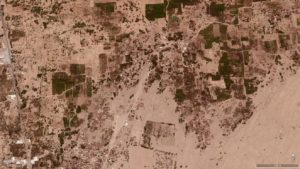 Determining the factors behind the rapid decline proved to be a complex and interesting quest that brought to the surface a confounding dynamic involving conflicts, climate, natural disasters and tension between modern and traditional agricultural practices. The relationship between water, agriculture and land-use in Yemen is fragile, according to the many analyses written by the Food and Agriculture Organization, the World Food Programme, the UN Development Programme, the World Bank and Yemeni government reports, as well as in academic literature. This delicate balance between water use and agriculture can easily be disrupted. Other than the force majeure natural hazards such as flooding (which damaged 500,000 date palms in 2008), natural causes such as pests and droughts should be manageable; this is where armed conflict can tilt the balance.

The armed violence in this region directly leads to the displacement of farmers fleeing frontline areas, leaving their date plantations unattended, while landmines hamper access to farmland. The war has resulted in a sharp increase in the price of diesel, which is needed for water pumps to extract groundwater to irrigate the land, while access to pesticides and insecticides needed to fight off bugs and diseases has been limited. At the same time, changing climate due to human-made causes contributed to the salinization of groundwaters and increased desertification, with the creation of more sand dunes in the coastal areas where the date plantations are located. Without proper and effective systems in place to minimize these impacts, agricultural areas are increasingly suffering the consequences.

The loss of date trees also occurred in the Hadramawt governorate, according to a recent article published by Holm Akhdar, where torrential rains caused flooding of the Hajiar river, resulting in hundreds of snapped date palms, if not more, on the riverside.

Yemen has historically struggled with water use, and the conflict has compounded problems around water security and helped to spur a cholera epidemic and spread other water-related communicable diseases. The armed violence has also left a trail of destruction on Yemen’s wider agricultural production sector, with significant decline in crop production. According to analysis by the World Bank, there was a 76 percent decrease in cropland production from 2014 to 2017. The conflict, as well as driving some farmers from their land, also directly impacted agricultural and water infrastructure, hampering the cultivation and harvesting of crops and negatively impacting overall food security.

The environmental echoes of the conflict will long be heard. Yemen’s 2019 contribution to the Convention on Biodiversity warned that the lack of resources was seriously impacting its ability to “halt ongoing environmental and conflict-related damage,” manifested by “accelerated loss of biodiversity and the excessive extraction of scarce water due to the escalation of the war.” The report also detailed increases in severe pollution, the loss of protected areas and a growth of invasive species. These will have dire consequences if not properly addressed in post-conflict analysis and reconstruction programs, which should include sustainable redevelopment and a ‘building-back better and greener’ approach.

Yemen makes clear how vital the natural environment and human-made environmental infrastructure is for a population dependent on access to clean water for drinking and hygiene, and for use in agricultural food production, which feeds communities and provides a source of income through both the labor and the export of products. Ongoing efforts by the International Committee of the Red Cross through its updated guidelines for protection of the environment in armed conflicts, UN Environment Assembly resolutions, and debates in the UN Security Council on the environment, peace and security all contribute to the search for a proper identification, response and accountability mechanism for conflict-linked environmental damage. This ultimately is needed to contribute to the wider protection of the environment in armed conflicts, and the civilians depending on it.

Wim Zwijnenburg is a long-time contributor to Bellingcat, an open-source investigative journalism collective, and works as the humanitarian disarmament program leader for PAX, a Dutch peace organization, conducting field research and advocacy on environment and conflict. He also coordinates the European Forum on Armed Drones.