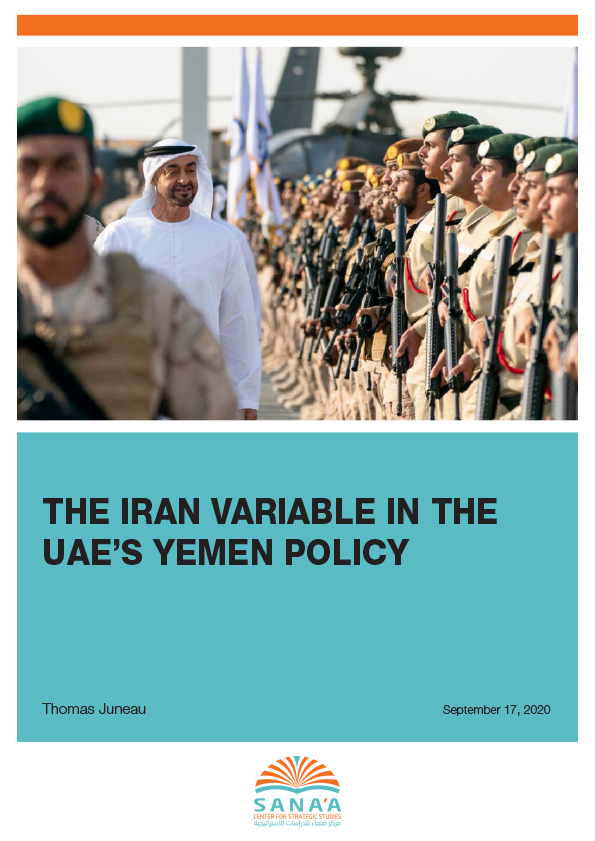 The growing foreign policy assertiveness of the United Arab Emirates (UAE) has attracted much attention in recent years. The small oil-rich federation has deployed its forces throughout the region, most visibly in Yemen and Libya; thrown its diplomatic weight around, notably by supporting Abdelfattah al-Sisi in Egypt and leading the charge in blockading Qatar; positioned itself as one of the United States’ most trusted counter-terrorism partners; and, perhaps most strikingly, made headlines recently by becoming the third Arab state to normalize relations with Israel.

Media commentary often attributes the UAE’s expansionist foreign policy in large part to its fear of Iran. Its rapprochement with Israel, in particular, has frequently been linked to its desire to build a common regional front against the Islamic Republic. There is truth to this: the UAE views Iran’s ambitions in the region with much concern, and it broadly supports American efforts to contain and roll back Tehran’s influence.

That said, it is easy to exaggerate the importance of the Iran variable in the UAE’s calculus in Yemen. Anxiety about Iran’s growing support for the Houthis has certainly been one driver of the Emirates’ policies there, but it has only been one among others – and mostly a secondary one. As I argue in a recent article, the UAE’s main objectives in Yemen are rather to manage its two most important bilateral relationships, with Saudi Arabia and the United States, and to oppose Islah, the Muslim Brotherhood-linked group in the country. Counter-terrorism – to weaken Al Qaeda in the Arabian Peninsula and to position itself as the indispensable regional partner in this matter for the U.S. – and opposing prospects of regional democratic revolutions are also goals. This short article explains how, beyond these objectives, the Iran variable fits into the UAE’s calculus in Yemen.

The UAE views Iran as an ambitious regional power whose influence can only come at the expense of its own and that of its partners. There is a longstanding rivalry between the two, fuelled originally by Iran’s occupation since 1971 of three islands in the Gulf claimed by the UAE. The UAE shares this acute threat perception with Saudi Arabia, but it tends to be more pragmatic; there is less inflation of the threat Iran poses in Abu Dhabi than in Riyadh. There are also internal divisions within the UAE on the matter, with Dubai and the other small emirates disagreeing with Abu Dhabi’s harder stance and preferring a more pragmatic approach providing space for trade with Iran.

Countering Iran’s influence thus forms part of the Emirati calculus in Yemen, but it is a secondary, not a primary goal. The UAE and Saudi Arabia grew increasingly alarmed in 2014-15 as Houthi power expanded out of their core area in the northwest toward the south and east. Like Saudi Arabia, the UAE views the Houthis as close partners of Iran, but it is more hard-nosed in its assessment of the nature and extent of Iran’s role. That is, whereas Saudi Arabia inflates Iranian influence over the Houthis, the UAE has a more realistic view that the Houthis are not Iranian puppets, and that ultimately Iran has invested only modest resources in the country; the UAE understands that Yemen remains a relatively low foreign policy priority for Tehran.

Though the UAE intends its intervention to send a message to Iran – that it opposes the spread of its influence in Arab affairs – it has not intervened in Yemen primarily to counter Iran. During a pre-pandemic trip to the UAE, for example, an interviewee I spoke to, who had direct access to the most senior levels of the Emirati government, argued that “the UAE is in Yemen because of Saudi Arabia, not Iran.” The UAE also aims to build influence in the south of the country, where the Houthis are either absent or weak. Emirati partnerships with a range of Yemeni actors – southern militias and politicians, in particular, as well as members of the family of the late President Ali Abdullah Saleh – are more aimed at countering Islah than the Houthis.

The UAE’s involvement in Yemen has nevertheless become intertwined with its policy towards Iran. The UAE opposes the Islamic Republic and wants to keep it isolated and weak, but it does not want tension to escalate into a direct military confrontation. It judges, correctly, that since it is on the frontline and that its economy is dependent on maritime trade, war would be highly damaging. It therefore grew increasingly concerned in 2018 and the first half of 2019 as tension between the United States and Iran grew. It was also increasingly concerned that the Houthis, who had been regularly launching missile and drone attacks against Saudi Arabia, would eventually also target the Emirates, which they could now do in large part thanks to Iranian assistance. Diminishing UAE confidence in the reliability of the United States as the extra-regional guarantor of its security further contributed to its anxieties. These factors played a key role in shaping the UAE’s 2019 decision to partially withdraw from Yemen.

The UAE has thus become slightly more conciliatory towards Iran since 2019. Abu Dhabi, in particular, did not specifically accuse Iran of being responsible for the attack on four tankers off its coast in May, unlike Saudi Arabia and the US. Emirati and Iranian officials also held rare high-level talks on maritime security, another signal from Abu Dhabi that it seeks to avoid military confrontation and to manage tensions through diplomatic means. Importantly, these reactions and initiatives do not signal a major shift on the UAE’s part or a rapprochement, but an effort to reduce and better manage tension with Iran, and to protect its image as a safe and stable destination for investment.

Thomas Juneau is an associate professor at the University of Ottawa’s Graduate School of Public and International Affairs and a non-resident fellow at the Sana’a Center for Strategic Studies. He tweets @thomasjuneau.

This commentary is part of a series of publications by the Sana’a Center examining the roles of state and non-state foreign actors in Yemen.