Marib’s Tribes Hold the Line Against the Houthi Assault

Tribesmen and Yemeni army forces are stationed on the frontlines near Al-Jadafer village in Marib, along the governorate's border with Al-Jawf, on September 6, 2020. // Sana’a Center photo by Ali Owidha
اقرأ المحتوى باللغة العربية 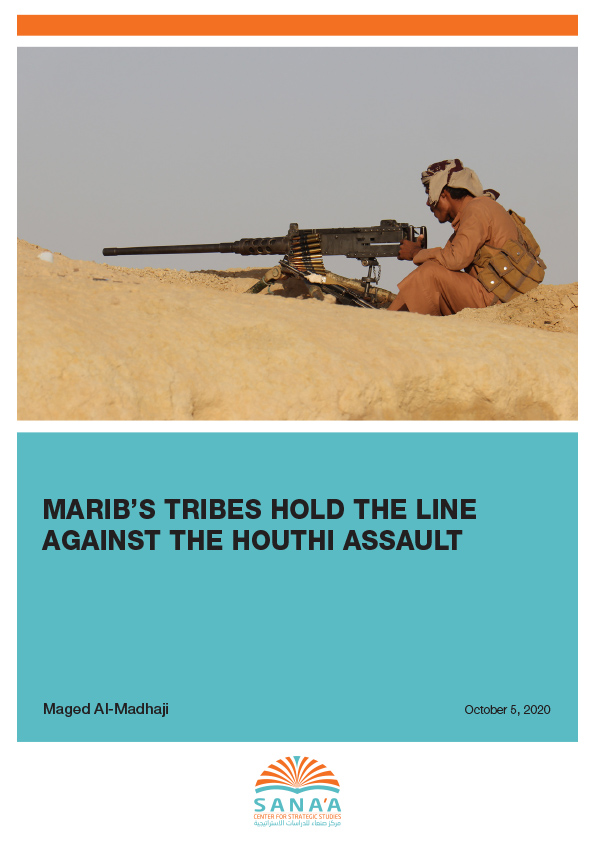 The future of the war in Yemen will be determined in Marib. The Yemeni government’s control over the governorate, one of its last major centers of power in the country, is being severely challenged as Houthi forces seek to extend their control over all of northern Yemen and seize control of Marib’s oil and gas resources. A desperate defense by local tribes, government forces and the Saudi-led coalition has so far managed to prevent the Houthis from marching on the governorate’s capital, Marib city, and the oil fields farther to the east.

In recent weeks, the battle for Marib has turned into a war of attrition, with the Houthis throwing more and more fighters against multiple fronts. For its defense of the governorate, the government has relied largely on local tribes to stem the Houthi offensive amid questions over the capacities and capabilities of the Yemeni army. While a recent reorganization of army forces has managed to partially stabilize the situation, it remains tenuous, with the potential for a Houthi breakthrough looming.

After years of static frontlines, a renewed struggle for Marib kicked off in early 2020 with the Houthis pressing the governorate from multiple sides. At the end of February, the Houthis captured large swathes of Al-Jawf governorate, which borders Marib to the north. In May, the group decisively quelled a tribal uprising in Al-Bayda’s Radman al-Awad district. This victory spelt the end of the tribal neutrality formula by which the lands of the Al-Awad tribe in Al-Bayda were closed to both government forces and the Houthis, a dynamic that had prevailed since 2015. By squashing the uprising Houthi forces created an avenue to push into Marib from the south, adding to ongoing offensives in the north and west. Specifically, launching an attack into southern Marib pitted the Houthis against one of the most cohesive and most powerful tribal blocs in the governorate, the Murad tribe.

With government forces unprepared to confront the Houthi offensive in the wake of the failed tribal uprising in Al-Bayda, the entire weight of defending southern Marib fell on the Murad tribe. This has had several crucial consequences, both for the battle for the governorate and fighting in other parts of the country. To defend their tribal lands, the Murad summoned its tribesmen fighting as part of the national army across Yemen, with the result that government forces have been weakened on other fronts. In September, the Houthis advanced in southern Marib following a fierce battle in Mahliyah district and reached Rahabah district, whose residents all belong to the Murad tribe. Rahabah borders the districts of Al-Jubah and Jabal Murad, which form the heart of the Murad tribe territory.

The dramatic developments since the Houthis launched a renewed offensive in Marib, and the reliance on tribes for the governorate’s defense, raise several questions about the military strategy and combat capabilities of the Yemeni government and its allies in the Saudi-led coalition. There has been an exceptional failure by the government and coalition to support Marib’s tribes, which have been loyal to the government and oppose the Houthis. Amid the major issues plaguing the government and coalition in Marib are corruption in recruitment, including the large phenomenon of ghost soldiers, and conflict and lack of coordination between Yemeni military commanders. In particular, rumors of a struggle between Minister of Defense Mohammed al-Maqdashi and Yemeni Army Chief of Staff Saghir bin Aziz have emerged in recent months. Government failures should also shine a spotlight on the role and responsibility of Vice President Ali Mohsen al-Ahmar, who is among the most important actors in Marib and, with the Islah party, has used Marib as a center of influence and power.

Bin Aziz, who was appointed army chief of staff in February, took on a more influential role in military decision making in Marib in the wake of several defeats that Al-Maqdishi and Al-Ahmar have been implicitly blamed for. A zealous opponent of the Houthis who previously fought against the group in Amran, his home governorate, in 2014 as the Houthis were pushing toward Sana’a, Bin Aziz has worked to reorganize and strengthen frontline defenses, including bringing in officers that had previously been excluded and reassigning incompetent ones. These efforts to improve the army’s effectiveness have garnered the trust of the coalition and would put Bin Aziz in a good position to replace Al-Maqdishi as minister of defense in the new government that is expected to be formed as a result of the Riyadh Agreement.

On the coalition side, the surprise dismissal of Saudi-led military coalition commander, Prince Fahd bin Turki, at the end of August, along with a number of his military aides over corruption charges, can to some extent be interpreted as a result of the clear military failures in Marib. Notably, Saudi Arabia withdrew a large number of officers and soldiers from Marib over the past two years, deploying them to military formations along the Kingdom’s southern border to defend against Houthi attacks. The graft accusation against a high-ranking Saudi military figure from the royal family, however, did not lead to any Yemeni military figures being held accountable for corruption in the coalition and government war effort, as if bin Turki’s alleged crooked dealing occurred in another conflict.

The Murad tribal fighters confronting the Houthis managed to rearrange their defensive lines after losing the districts of Mahliyah and Rahabah. The terrain between Rahabah, and Jabal Murad and Al-Jubah is rough, granting an advantage to the tribal fighters, who intimately know the battlespace, when confronting the Houthis. This front has proven extremely draining to the Houthis, with their superior numbers giving them little advantage against Murad tribesmen fighting on home turf, leading to a large number of casualties. Still, the terrain suggests that southern Marib may become a static front, resembling the Sirwah front in the northwest of the governorate, where there has been a stalemate between the two warring sides since 2015.

The battle for Marib now encompasses a wide scope of a military confrontation that extends in an arch-like shape from the southwest all the way to the north. In the north, the Houthis also experienced a setback in their ability to pressure Marib from the desert of Jawf, east of the city of Al-Hazm. A Yemeni army counterattack in September led by the Commander of the 6th Military Region, Major General Amin al-Waeli, and supported by coalition airstrikes, was able to advance across vast areas in the desert and approach Labanat camp, putting Houthi forces in Al-Jawf in a tenuous defensive position for the first time since they seized parts of the governorate. To compensate, Houthi forces have recently exerted additional military pressure in Medghal and Raghwan districts in the northwest of Marib. These districts are home to the Jada’an tribe, which despite its small size compared to the Murad and Abaidah tribes, has been exceptional in confronting Houthi attacks. This defense has proven vital, as a breakthrough in the northwest would put Houthi forces within reach of Marib city. Meanwhile, the western regions of Marib bordering Sana’a governorate remain the most open front for the Houthis to launch attacks from – save for Bani Dhabyan district, home to a tribe of the same name affiliated with the larger Khawlan tribe, which in 2015 declared neutrality in battles between government and Houthi forces.

The Future of the Marib Conflict

What has protected Marib so far from falling to the Houthis is primarily the steadfastness of the local tribes. These tribes have long exercised and enjoyed extreme independence, and as a result they have complicated relations with any central authority in Sana’a. The Murad and most other local Marib tribes also have a prominent sense of their Sunni identity that generally puts them at odds with the Houthi movement, which subscribes to an Islamist ideology based on Zaidi Shia Islam. In particular, the Murad have a complex historical relationship with Yemen’s Zaidis, one that has often been defined by animosity. Imam Ali bin Abi Talib (the symbolic father of all Shia sects in the Islamic world) was assassinated by Abd al-Rahman ibn Muljam, a member of the Murad tribe, in 661. More recently, Yahya Mohammed Hamid ed-Dine, the Zaidi imam of the Mutawakkilite Kingdom of Yemen, was killed in 1948 by Ali bin Nasser Al-Qardaei Al-Muradi, a prominent sheikh of the Murad tribe. Finally, the combat experience of these tribes and their intimate knowledge of their territory has managed to even the scales in the fight against the Houthis, despite being outnumbered.

For the Houthis, the potential of reaching Marib city and moving further east to seize control of Safer and its oil refinery remains an irresistible target. The capture of Marib would change the shape of the entire war on the political and military level in their favor, notably positioning the Houthis to threaten the southern governorates of Hadramawt, Shabwa and Al-Mahra. Even absent a military breakthrough, continuing military pressure on the Marib local authority and tribes could force them to come to an accomodation with the Houthis, as has occurred in other battles between tribes and Houthi forces over the years of conflict. The group has already proposed, via several mediators, a settlement to Marib’s governor, Sultan Al-Aradah, that stipulates economic and security arrangements that would grant the Houthis a share of the governorate’s revenues and positions for their supporters in Marib’s local authority, but Al-Aradah has so far rejected these proposals. Still, reports of growing resentment within some Murad tribes over the losses sustained in recent battles against the Houthis and a perceived lack of support from the government and coalition cannot be discounted.

A win for either side in the battle for Marib would be a turning point in the Yemen war. A Houthi victory would radically reshape Yemen, granting the group almost full control over northern governorates, and importantly, access to the country’s oil and gas resources and the revenues that come with them. The Houthis have been dreaming of such gains since the beginning of this long conflict. On the flip side, a Houthi defeat in Marib, after a large investment in terms of material and manpower, would be a major setback for the group. In particular, the group must worry about the consequences of the failure to take Marib on its image as a powerful military force. This applies not only domestically, in terms of future challenges from rivals, but also abroad. The international community has been focused on the battle for Marib, knowing that the result, one way or the other, will shape the future of the war, and potential peace, in Yemen.

Maged Al-Madhaji is a co-founder and executive director of the Sana’a Center for Strategic Studies. He tweets at @MAlmadhaji.

The Iran Variable in the UAE’s Yemen Policy September 17, 2020 Analysis

The United States in a World Without Friends September 8, 2020 Analysis

The Sana’a Center Editorial FSO Safer: Why Are We Still Wait… September 7, 2020 The Yemen Review