In Focus: Return to Aden

In February 2016, after 29 years in Aden, I left my city to live in another country. My mother asked me to leave because of the security situation. In the five years since I’ve returned three times – my latest trip home was earlier this year.

The Yemeni poet Abdullah Al-Bardouni wrote about how a person leaves a part of her soul in her country and takes parts of her country into exile. I’ve thought about this every time I’ve come back. With each visit I had hoped to restore my memory of Aden, this city that I love above all cities. But each time I return I find I lose more and more of my soul. I feel like a stranger here now. The roads are different. The buildings have changed. I don’t recognize the faces in Al-Mansoura, the neighborhood where I grew up. Each time I leave, I carry with me new pieces of Aden. Most are neither good nor pleasant; they are the fragmented pieces and scattered remains of what our cities were and what they have now become.

I used to make fun of expatriates who returned to Aden to search for ancient memories of the city they remembered. I didn’t understand how small details and daily rituals connected them to their past. Maybe it was because I lived in the city and I changed as it changed, morphing daily with new realities, or maybe I was just young. But I used to wonder why each generation believed its version of the city was better than all the versions that followed.

But I will not write about the past. I will write in all melancholy about the scenes I see today in this city. Crisis and war have imposed themselves on Aden before, each time reshaping its identity. But what seems different this time is society’s acceptance of what we are becoming. I fear for the future and the intimate memories Aden will leave to the next generation. 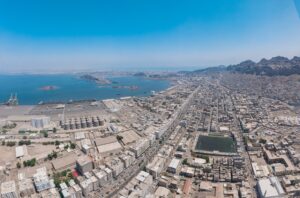 From Civilian Coexistence to a Militarized Society

For my birthday in January, my older brother gave me a V. Bernardelli 7.65 Italian pistol. Now, he said, everyone carries a weapon in Aden. Everyone has to defend themselves, by themselves.

The idea of ​​expressing love by gifting a weapon is not strange in Yemeni society, but it was never common in Aden. I was surprised to see how many homes in Aden now have weapons, and how many people – people you wouldn’t expect – now carry them.

Arms and military checkpoints have proliferated throughout Aden. Almost as if a city that was once characterized by civility, coexistence, and harmony has become an army camp. Aden was liberated from the Houthis six years ago, but the armed men have remained.

Hardly a day goes by without clashes between military forces of various names. Some days the conflicts are over politics, other days they are personal or criminal. But each one is violent and a resort to the force of arms to win a dispute. This violence isn’t limited only to Aden’s various armed groups. You can see young men and teenagers buying military uniforms at the Haraj Market, even if they aren’t soldiers. They believe people will respect and fear the uniform.

More than half of the young people I know have become soldiers with this or that force, both inside and outside of Aden. Many of them have a scientific education, but they chose a military livelihood. Not that there are really any other options. Doctors, engineers, university students, and teachers all seem to prefer to join an armed group that can provide them with a stable income and financial security for their families.

Others have benefited from the insecurity to implement their own agendas. News websites report on kidnappings, assassinations, and raids by individuals wearing military uniforms, only to discover later – if they are ever arrested – that some do not belong to any official security forces. The city’s tenuous security situation since 2015 has made it a fertile environment for committing crimes.

Today children play war in the streets of Aden. They divide themselves into two teams – a Houthi team and a Security Belt team – and play, imagining they are older brothers and fathers as they shoot pretend weapons at one another. Perhaps that is normal, given what they’ve lived through, what they’ve seen and heard. But what isn’t normal is their knowledge of different armed groups, their leaders, and the roles they play. Adeni children name their wooden sticks and plastic toys after light and medium weapons. Names I still don’t know.

Because Yemeni society is armed in general, firearms are used in wedding processions in various regions across the country. But in Aden, this was never the case. I remember a few years ago that if firearms were used in a wedding, security forces would come and take the bridegroom to prison to spend his first night of marriage in jail.

Today, wedding processions are mobile battlefields, in which various types of light and medium weapons – from pistols and Kalashnikovs to anti-aircraft guns and sound bombs – are fired into the air. Not surprisingly, this has resulted in many civilian casualties and injuries as gravity returns the bullets to residential neighborhoods and homes. 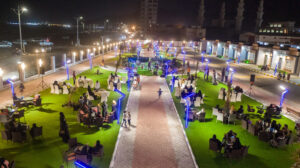 The Crown Resort in Khormaksar district of Aden, May 2021 // Sana’a Center photo by Ahmed Waqqas

Governed by the Gun

On my last trip home, my mother, a university professor, returned one day from work upset and shocked. She told me about a student, also ‘enrolled’ in a security force, who entered campus with an army vehicle and soldiers. The student threatened a professor who had failed him, insulting him publicly and forcing him to change the student’s grade.

This is what Aden has become. People use the law of the gun in government ministries, secondary schools, and even hospitals. The absence of the state has made many believe that they are above the law, that their guns permit them to fulfill whatever desires they might have.

Several days after my arrival in Aden, my friends took me around the city. We ended up at a beach resort in Al-Tawahi district. Surprisingly for me, there was a checkpoint at the entrance. There we saw individuals and families from another governorate tell resort administrators that they’d been sent by a well-known military commander. The administrator allowed them to enter without a ticket. Unjustified transactions like this are happening all over the city. If you have military connections, doors open for you.

It is the same on the streets. The new traffic law in Aden is the law of military vehicles. No one else matters. They have priority over pedestrians, public transportation, and private vehicles; even ambulances are forced to wait for them to pass.

In the past, government officials used to visit facilities and lay the cornerstones of new projects in front of local media. Today it is the military officials who are in the news, visiting schools and inaugurating new projects. Is this because the state is absent, or because armed groups have become the state?

One day, I noticed my friend browsing pictures of weapons on his smartphone. I joked with him, saying: “What are you doing, Faris Manna?” (Manna is one of the most famous arms dealers in Yemen and around the Horn of Africa). He answered me with optimism: “From your lips to God’s ears.” He told me that there are WhatsApp groups devoted to trading weapons. Many people in Aden are members of these groups, exchanging pictures of light and medium guns without fear of accountability or accusation. He said that many people have begun working in this field; even those who do not have weapons work as intermediaries between the seller and the buyer.

When I expressed surprise at the situation, he said these groups include people from different governorates and all sides. Some groups buy and sell weapons from individuals loyal to the internationally recognized Yemeni government and others from those belonging to the armed Houthi movement.

In the past, a girl in Aden would brag about if a doctor or engineer proposed to her; she would boast if he was from a well-known family or had relatives in the university. Education was the mark of stature in society. Today, we brag if a soldier proposes. I listened to a conversation between two girls who were no more than 20 years old. The first girl was engaged to a soldier with the Yemeni government, the second to a man in the Security Belt forces. They argued for more than half an hour over whose fiance had a higher salary and more privileges. I thought this was an outlier, unrepresentative. But the more women I spoke to in Aden, the more I realized how prevalent this view had become. 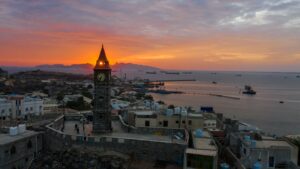 Little Ben in At-Tawahi district of Aden, March 2021. The clock tower was built in 1890 during the reign of Queen Elizabeth I when Aden was still a British Crown colony // Sana’a Center photo by Ahmed Waqqas

Another new development in Aden is that anyone seen criticizing the current situation is ridiculed and smeared, with those personal attacks more severe if the person resides outside of Yemen, as if whoever is not living through the current conditions and the suffering of the people has no right to criticize, even if they are from the city.

Given this, I know some people will be upset reading my thoughts and observations here, especially Southerners and the people of Aden. Maybe they will accuse me of bias and focusing on the negatives. Others may say that all this has existed for years, and that former President Ali Abdullah Saleh’s regime and his forces did worse both during and after the war in 1994.

So, to my critics: Yes, I am biased toward Aden and its people, who have repeatedly been violated by the various governments. Yes, I am focusing on the negatives, because they were not part of the Aden I knew before the war. Yes, I am opposed to the armed groups. And, yes, Aden and its people suffered worse conditions during the Saleh regime. But that was being done to us. Today, we are doing this to ourselves.

Ghaidaa Alrashidy
Visual Data Specialist and Researcher
Ghaidaa Alrashidy is a researcher and a visual data specialist with the Sana'a Center for Strategic Studies. Her research focuses on southern Yemen, and security and social issues in southern governorates. She is also a co-presenter on Dunyana, a weekly TV show on BBC Arabic that deals with issues pertinent to women in the Arab world.  … read more.
SHARE

The Sana’a Center Editorial: A Presidential Council: The Best of Bad Alternative… June 14, 2021 The Yemen Review

Priorities for the Recovery and Reform of the Electricity Sector in Yemen May 25, 2021 Main Publications

Yemen’s West Coast: A look into politics, society and war along the Red Sea May 24, 2021 Analysis