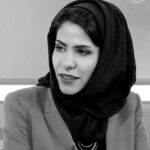 Ghaidaa Alrashidy is a researcher and a visual data specialist with the Sana’a Center for Strategic Studies. Her research focuses on southern Yemen, and security and social issues in southern governorates.

She is also a co-presenter on Dunyana, a weekly TV show on BBC Arabic that deals with issues pertinent to women in the Arab world.

Alrashidy has worked for almost a decade in development programs with various international organizations, including the International Organization for Migration, Mercy Corps and Responsive Governance Project (USAID).

Following the 2015 battles in southern Yemen, Alrashidy headed the Aden 180 Initiative to assess the damage to property and infrastructure in southern governorates.

Alrashidy holds a BS in architecture and a diploma in gender studies from the University of Aden. She is currently a master’s candidate in Urbanism at the Lebanese University in Beirut.