An Unending Fast: What the Failure of the Amman Meetings Means for Yemen

By Spencer Osberg and Hannah Patchett 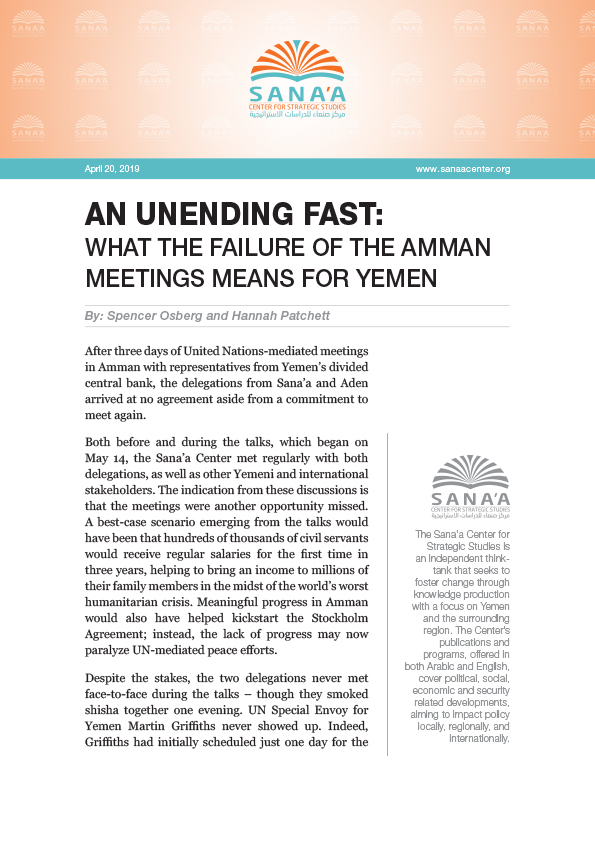 After three days of United Nations-mediated meetings in Amman with representatives from Yemen’s divided central bank, the delegations from Sana’a and Aden arrived at no agreement aside from a commitment to meet again.

Both before and during the talks, which began on May 14, the Sana’a Center met regularly with both delegations, as well as other Yemeni and international stakeholders. The indication from these discussions is that the meetings were another opportunity missed. A best-case scenario emerging from the talks would have been that hundreds of thousands of civil servants would receive regular salaries for the first time in three years, helping to bring an income to millions of their family members in the midst of the world’s worst humanitarian crisis. Meaningful progress in Amman would also have helped kickstart the Stockholm Agreement; instead, the lack of progress may now paralyze UN-mediated peace efforts.

Despite the stakes, the two delegations never met face-to-face during the talks – though they smoked shisha together one evening. UN Special Envoy for Yemen Martin Griffiths never showed up. Indeed, Griffiths had initially scheduled just one day for the talks, which were extended to three days only after requests for the extension from both delegations.

The primary issue dividing the parties was what to do with revenues from the three ports around Hudaydah City – Ras Issa, Saleef, and Hudaydah, the busiest ports in Yemen and the primary entry points for the country’s commercial and humanitarian shipments. The armed Houthi movement has held Hudaydah City for four years, while a ceasefire agreement in December 2018 halted an offensive – backed by the Saudi-led military coalition – to take the city at its peripheries. Revenues from the port, tens of millions of dollars annually, were estimated to have made up more than a quarter of the Houthi authorities’ income in 2018, and likely more now.

The Stockholm Agreement stipulated that revenues from the ports should be deposited in the Central Bank of Yemen’s (CBY) Hudaydah branch, and used to contribute to the payment of civil servant salaries in Hudaydah and “throughout Yemen.” Going into the talks in Amman, the government position was that the CBY in Hudaydah should be completely under the authority of the CBY in Aden. This entailed rescinding all Houthi appointments since 2014, and moving forward, the Hudaydah branch would have to follow all directives from, and report all activities to, the Aden CBY. The Yemeni government also wanted all state revenues from Hudaydah governorate – not just from the ports – submitted to the Hudaydah CBY. These would be used to pay the salaries of all public sector workers in Hudaydah, based on the 2014 payroll – meaning the removal of any Houthi-appointed personnel. Any remaining revenues were to be allocated to pay salaries of health and education staff elsewhere in Yemen that are not currently being paid. As a starting point the Houthi delegation wanted to discuss all state revenues in Yemen, with the submission of revenues from Hudaydah port to the authority of the Aden CBY being contingent on all civil servant salaries in the country being paid.

The revenues from Hudaydah’s ports were a central motivator for the Saudi-led military coalition – which backs the internationally recognized Yemeni government – launching its campaign to take the city last year, regardless of its claims of weapons smuggling through the ports. While the Stockholm Agreement would mean the Houthis giving up the ports, there were several counterbalancing factors from their perspective: full civil servant salary payments would allow them to gain revenue through taxes and increased economic activity in their areas, especially considering that most civil servants live in Houthi-controlled territory. Houthi forces also avoided a battle for Hudaydah, which would have been costly in manpower and money.

Signing a deal on Hudaydah revenues without an agreement to pay civil servant salaries country-wide would have meant only revenue losses for the Houthis, and thus was something they weren’t willing to do. For exactly that reason, the government of Yemen wanted the ports’ revenues to be used to pay civil servant salaries in Hudaydah only, rather than the whole of Yemen – as this would deprive the Houthis of an avenue to recover lost revenues. Rather, the Yemeni government delegation advocated a gradual approach of paying the salaries in Hudaydah first and then financing Hudaydah public services, with the disbursement of any remaining revenue to be agreed on at a later stage.

So after three days of UN staff running back and forth between the delegations, there were no concessions. Ultimately, the Special Envoy’s staff handed both sides a draft agreement with 14 bullet points that tried to play to a middle ground between the rival parties. However, the text left vague the question of whether or not to pay all civil servant salaries, while also essentially bypassing the contentious issue that both sides claim to be the legitimate head of the CBY. The Special Envoy’s office asked both delegations to take the draft with them and come back with comments before the next meeting, scheduled for a month from now.

The danger is thus that even if both parties accept the draft agreement, they will likely do so under differing interpretations. This lack of clarity in commitments is what has delayed the implementation of the Stockholm Agreement since December 2018. The Stockholm Agreement also stipulated that the parties’ negotiating teams would meet again on January 25 – a meeting that five months following the Sweden talks still has not happened. The strength of the commitment for the banking delegations to meet again within a month should be seen in the same light – a timeline backed by wishful thinking.

The UN Special Envoy stated in October 2018: “There’s no doubt in my mind whatsoever that this economic issue is now the overwhelmingly most important priority.” Since, however, the demonstration of Griffiths’ commitment to addressing this priority has been lacking. Of the 90-plus members of his office staff, only one is fully dedicated to the economic file, revealing a lack of willingness to build the capacity needed to mediate the economic aspects of the conflict.

That the Special Envoy initially scheduled only a single day for negotiations on this “most important priority” and then did not even attend was interpreted by both sides as a lack of seriousness on his part. As a member of one delegation told the Sana’a Center, rather than viewing the trip as an opportunity for substantive negotiations, it was “just another trip with per diems.” In the eyes of both warring parties, the talks diminished the status of the UN as a mediator. What is clear is that the UN is unwilling to be the architect of an economic deal, even while the underlying issues blocking the implementation of the Hudaydah Agreement are primarily financial and economic in nature.

Tellingly, the warring sides have previously come to various tacit agreements to protect business interests that cross frontlines – such as excusing powerful businessmen, who are also members of Parliament, from having to attend parliamentary sessions by either of the competing legislative bodies, where their attendance might have compromised the financial dealings of both sides. Smuggling and other lucrative industries that have sprung out of the war also function seamlessly between ostensible enemies. However, as demonstrated in Amman, the desperate situation of the vast majority of the population did not beget the same concern.

Instead of attending the meetings in Amman, Griffiths gave a briefing to the UN Security Council in which he certified that Houthi forces have withdrawn from the ports, even while Houthi-appointed port administration and security personnel remain. The absence of progress in Amman means that the Houthis continue to control the ports, essentially under UN protection, while the coalition’s justification for a battle in Hudaydah has been undermined. The government, in turn, will persist in its attempts to tighten the economic noose around the Houthis – through regulations on imports, commercial banks and money exchangers. Meanwhile, millions of ordinary Yemenis are spending another Ramadan in an unbroken fast.

Spencer Osberg and Hannah Patchett are editors at the Sana’a Center for Strategic Studies.

The UN and Yemen: The Need for Precisely Guided Diplomacy
May 18, 2019 Analysis