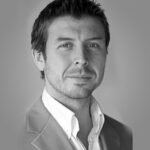 Spencer Osberg is chief editor at the Sana’a Center for Strategic Studies. He has worked with various institutes and NGOs to produce socio-economic, political, humanitarian and security related studies on the Middle East and North Africa.

Osberg was previously the managing editor of Executive magazine in Beirut. As a journalist he reported for media outlets including Al Jazeera English, CBC Radio, France 24, The Globe and Mail, Nikkei Newspapers, and he is co-writer of the award-winning documentary film ‘The War Show’.

Spencer holds a master of fine arts in creative nonfiction and a bachelor of journalism from the University of King’s College. He also holds a bachelor of arts double major in philosophy and Spanish from Dalhousie University.