Where is Saudi Arabia Headed in Yemen? 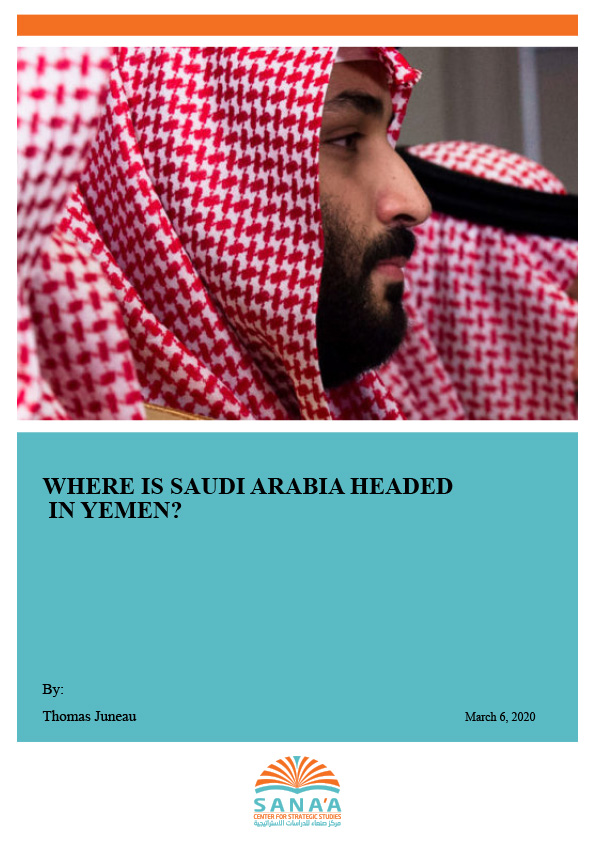 Saudi Arabia launched its military intervention in Yemen in March 2015, initially at the head of a coalition of 10 states, with the official objective of re-establishing the government of President Abdo Rabbu Mansour Hadi in the capital, Sana’a, from where it had been expelled the previous September by the Houthis. Five years later, Saudi Arabia is now stuck in a quagmire: the frontlines have barely moved since the coalition, along with its local partners, pushed the Houthis out of Aden in the early months of the intervention. The war has been excessively costly for Riyadh, not only militarily and financially but also diplomatically. What does 2020 hold for Saudi Arabia’s role in Yemen?

The scope and scale of Saudi Arabia’s military intervention in Yemen has to be seen in the broader context of the revolution in its foreign policy in the wake of the ascendancy of Mohammed bin Salman (MBS) in early 2015.[1] In the short period between 2015 and 2018, the previously cautious Kingdom launched a brutal war in Yemen, led the blockade of its neighbor Qatar,[2] initiated a diplomatic spat with Canada,[3] kidnapped the Lebanese prime minister and forced him to resign on television, and assassinated a prominent critic, Jamal Khashoggi, at the Saudi consulate in Istanbul.

It is striking, however, that MBS has not launched comparably reckless foreign policy adventures since late 2018, and that his aggressive and ambitious rhetoric has toned down. Why is that the case? Arguably, there has been a growing realization that the country’s foreign policy since 2015 was increasingly costly, and that this was unsustainable in the long term. How this learning process came about, however, is not clear: whether MBS truly understood the costs of his actions and concluded he needed to slow down his ambitions remains a matter of debate, as is the role that his father, King Salman, and senior advisors played in moderating the impetuous Crown Prince’s ambitions.

The sudden shift in Saudi foreign policy has partially reversed since the assassination of Khashoggi in October 2018, but this does not imply a return to the pre-2015 status quo. Indeed, adventurist regional endeavors continue, even if new wars have not been launched: the diplomatic and economic embargo of Qatar and the war in Yemen, in particular, show little sign of abating.

What does this partial recalibration mean for Saudi involvement in Yemen? Riyadh wants to remain involved in Yemen, but it also wants to lower the costs of its intervention. This is, of course, far easier said than done, and Saudi Arabia has yet to devise and implement a strategy that would allow it to do so.

Riyadh, first, cannot afford to withdraw completely from Yemen, given the geo-strategic importance of the latter to the former and the 1,800 kilometer border they share; it is rather looking to recalibrate its role. Riyadh still perceives, in particular, that its support is vital to ensure the survival of the loose and heteroclite coalition supporting President Hadi, which includes the Islah party, some remnants of the General People’s Congress (the party of former President Ali Abdullah Saleh), and a diverse array of tribal militias, business interests, and loyalist units in the military and security services. Riyadh believes, correctly, that its sudden withdrawal would lead to the weakening or the disintegration of this coalition, which would benefit the Houthis – and their external benefactor, Iran.

At the same time, Riyadh wants to reduce the costs of its intervention in Yemen. It has come to realize, in particular, that the financial and military costs are unsustainable[4] and that the diplomatic costs – in terms of its image in the West, both in the media and in political circles – are mounting. This, in turn, complicates its ability to leverage its close partnerships with Western governments, which it views as essential to its security. This could become especially true in the case of Saudi Arabia’s most important relationship, that with the United States, where frustration with Riyadh is gradually mounting. This is true in Congress, where opposition to the war in Yemen has become an area of bipartisan cooperation, and even more so throughout the Democratic Party. Should a Democrat win the presidential elections in November 2020, in particular, Saudi-US relations could be in for a rough ride.

Devising and implementing this recalibration is a very hard balancing act to strike, one which Riyadh has failed to achieve so far. Engineering such a change in policy, first, is complex, and made more difficult by Saudi’s weak bureaucratic and institutional capacity. Second, perhaps the greatest challenge for Saudi strategy in Yemen is Hadi himself. Riyadh has completely tied its fortunes to him; as president of the internationally-recognized government, he leads the coalition that Saudi Arabia supports to counter the Houthis and Iran. Hadi is, as such, indispensable. He is, however, weak, corrupt, and ineffective. This poses a major constraint on Riyadh’s ability to achieve its objectives in Yemen.

A related problem for Riyadh is that the anti-Houthi front is weak and fragmented, with Hadi as its leader in name only, further reducing its leverage in talks with the Houthis. As such, Saudi Arabia has actively sought to bolster the unity and strength of pro-government forces, notably with the Riyadh Agreement in the fall of 2019. But this accord, which aimed to integrate the separatist Southern Transition Council into central government structures, has largely failed.[5]

Looking forward, Riyadh will continue, and probably intensify its efforts to unify and build up the anti-Houthi front, but prospects for success are low given its fragmentation and Riyadh’s absence of alternatives to Hadi. As such, the most likely scenario for Saudi involvement in Yemen in 2020 is a continuation of the status quo.

Thomas Juneau is an assistant professor at the University of Ottawa’s Graduate School of Public and International Affairs and a non-resident fellow at the Sana’a Center for Strategic Studies. He tweets @thomasjuneau.

This commentary appeared in The War Over Aid – The Yemen Review, January/February 2020.