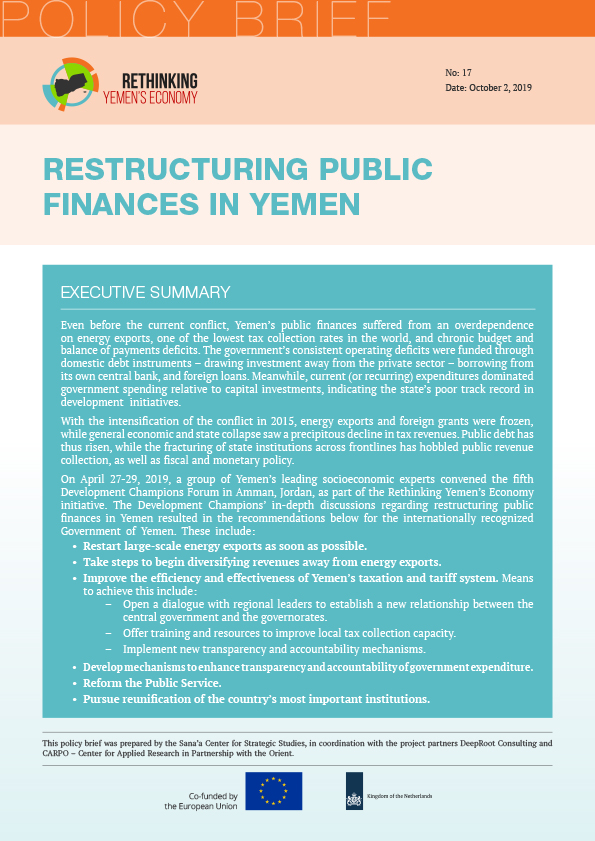 Even before the current conflict, Yemen’s public finances suffered from an overdependence on energy exports, one of the lowest tax collection rates in the world, and chronic budget and balance of payments deficits. The government’s consistent operating deficits were funded through domestic debt instruments – drawing investment away from the private sector – borrowing from its own central bank, and foreign loans. Meanwhile, current (or recurring) expenditures dominated government spending relative to capital investments, indicating the state’s poor track record in development initiatives.

With the intensification of the conflict in 2015, energy exports and foreign grants were frozen, while general economic and state collapse saw a precipitous decline in tax revenues. Public debt has thus risen, while the fracturing of state institutions across frontlines has hobbled public revenue collection, as well as fiscal and monetary policy.

On April 27-29, 2019, a group of Yemen’s leading socioeconomic experts convened the fifth Development Champions Forum in Amman, Jordan, as part of the Rethinking Yemen’s Economy initiative. The Development Champions’ in-depth discussions regarding restructuring public finances in Yemen resulted in the recommendations below for the internationally recognized Government of Yemen. These include:

Before the Current Conflict

For decades, Yemen has suffered from a fragile fiscal structure, given its overdependence on energy exports. Before the armed Houthi movement backed by former President Ali Abdullah Saleh took over the capital, Sana’a, in September 2014, the oil sector accounted for 25 percent of gross domestic product and 65 percent of the public budget.[1] While over the years the government has attempted to diversify the economy by adopting reform programs aimed at supporting non-oil sectors and foreign investment, these did little to wean public finances away from oil dependence.[2]

Yemen is one of the least tax-collecting countries in the world, with tax revenues accounting for less than 9 percent of GDP before the war, compared to an average of 17.7 percent in developing countries with similarly sized economies.[3] Over the years, the state has sought to adopt reforms aimed at increasing the share of tax revenues to total public revenues; however, taxes remained below 30 percent as an average of the total public revenues from 2010-2015, according to the financial indicators.[4]

Prior to the ongoing conflict, the government also employed roughly 31 percent of the country’s total labor force.[10] In government budgets from 2010 to 2014, some 42 percent of public revenues were allocated to salaries for some 1.25 million civil and military employees, amounting to Yemeni rial (YR) 75 billion, or 10 percent of GDP.[11] Meanwhile, another 1.5 million Yemenis in the lowest income bracket received quarterly social subsidy distributions totalling YR23 billion.[12]

The government’s consistent operating deficits have been funded through issuing domestic debt instruments, such as government bonds and treasury bills, borrowing from the Central Bank of Yemen (CBY), and foreign loans. Given the relatively high rate of return on domestic debt instruments,[15] the Yemeni government’s expansionary borrowing policies have also attracted the vast majority of commercial bank investments, which may otherwise have gone toward private sector development.

The Conflict’s Impact on Public Finances

In August 2014, the Yemeni government, under pressure from the International Monetary Fund (IMF) during negotiations for a US$560 million loan, issued a decree to repeal the public fuel subsidy. While being one of the largest expenses on the government budget, the repeal was ill-planned and failed to balance fiscal needs with social impacts: fuel prices jumped immediately and the public saw none of the proposed plans to redistribute and reinvest the promised revenue savings. As a result, the move was deeply unpopular. It immediately paved the way for the armed Houthi movement to launch a campaign lambasting the government and to veil its armed seizure of the capital the following month as part of a populist agenda. Public revenues have since declined steadily. In 2014, Yemen’s energy exports plunged by 77 percent to US$1.35 billion from a 10-year average of US$5.76 billion between 2004 and 2013 and never recovered after that.[16]

Furthermore, grants and foreign aid were frozen, which had provided significant support post-2011. The war also precipitated general economic and state collapse, leading to a decline in tax revenues. The public revenue ratio (ie. total public revenues/GDP) was 24 percent just prior to the conflict; by 2018 it had declined to 8 percent of the GDP.[19]

The collapse in public revenues resulted in a decrease in public expenditure of 36 percent between 2014 and 2016.[20] This involved the suspension of social benefits to 1.5 million of the poorest households in the country in 2015, the total suspension of expenditures on development projects, and declining spending on the operating costs of public services such as education, health and water, all of which exacerbated the humanitarian crisis. An escalating liquidity crisis led to the suspension of salaries for hundreds of thousands of people on the public payroll in August 2016.

The World Bank also estimated that the public debt ratio rose to 75 percent of GDP in 2017.[21] The actual 2018 government deficit was later estimated at YR660 billion, which was almost entirely funded through borrowing from the central bank.[22] Roughly 60 percent of this spending was used to pay the public wage costs, 17 percent to operational expenses, 14 percent to social benefits, and the rest to the acquisition of assets and payment of liabilities.[23]

In September 2016, the internationally recognized Yemeni government officially transferred the CBY headquarters from Sana’a to Aden, effectively creating two rival central bank authorities on either side of the frontlines.[26] This meant that there was no longer a unified entity in the country to collect public revenue, or to control fiscal and monetary policy. The fracturing of the official financial authorities in Yemen has also allowed for the black market to grow and thrive, drawing vast sums of money out of the formal economy.

Individual governorates have thus experienced vastly different economic realities and public service provision as a result of the conflict. For example, oil and gas-producing governorates, such as Marib, Hadramawt and Shabwa, are receiving 20 percent or more of the revenues from resource sales, while many other governorates and public institutions under Houthi control lack funds to cover even basic operating costs. Houthi authorities also divert available state resources to the group’s war effort.

Yemen’s balance of payments has for decades suffered deficits in the current account. Pre-conflict oil exports accounted for about 83 percent of total exported goods, while oil receipts accounted for about 65 percent of total foreign exchange flows into Yemen.[27] At the same time, prior to the conflict Yemen imported roughly 90 percent of its food needs from abroad, as well as most of its fuel needs and other commercial products.

Since the beginning of the conflict, there have been various new factors both weighing on, and supporting, Yemen’s balance of payments.

The cessation of energy exports in 2015 meant the loss of oil receipts. The central bank thus began depleting its foreign reserves to support basic commodity imports, with CBY reserves falling from US$5.23 billion in early 2014 to less than US$1 billion at the end of 2016.[28] As well, between September 2012 and March 2015, 27 different international donors pledged financial aid to Yemen exceeding US$10 billion, however only 44 percent was eventually disbursed. The suspension of this financial support in 2015 and the loss of oil receipts exacerbated the balance of payments deficit, with the current account deficit reaching about 9 percent of GDP in 2018.[29]

The Aden central bank’s expansive monetary policy – printing new banknotes to cover Yemeni government borrowing – helped drive accelerated deterioration in the Yemeni rial’s value between 2016 and 2018,[30] in turn spurring rapid inflation[31] and increased poverty.[32] These factors, however, led to a decreased consumer demand, with imports of goods dropping 46 percent in value between 2014 and 2017, from US$12.3 billion to US$6.6 billion.[33]

Following the agreement signed on March 15, 2018, between Yemen and Saudi Arabia, the central bank in Aden received a deposit of US$2 billion, in addition to another Saudi aid payment of US$200 million and oil grants. This support has led to tangible stability in the value of the Yemeni rial, with the exchange rate improving to YR500 per US$1 in late 2018 from YR800 in early October the same year.[34]

Remittances by Yemeni expatriates working abroad during the conflict, estimated at US$3.4 billion in 2017 after reaching a record US$3.7 billion in the previous year,[35] have been the most important source of foreign exchange inflows into the country during the conflict, while donor pledges to support Yemen’s humanitarian plan, which the United Nations hopes will amount to US$2.6 billion for 2019, are also significant. Both of these factors have contributed to reducing the current account deficit in the balance of payments.

The restructuring of the state budget is a long-term project, one which cannot be completed while the conflict is ongoing. There are short-term measures, however, that can begin the process, which can be followed by medium- and long-term steps as circumstances permit. To this end, the Development Champions have identified the following recommendations for restructuring public finances in Yemen for the internationally recognized Yemeni government and supporting international stakeholders:

At the same time, and while there is a pressing need to resume Yemen’s energy exports, the potential for post-war oil and gas revenues should not be overstated given the significant changes in the global energy landscape and the steady prewar decline in Yemen’s oil production since 2002. Increasing Yemen’s oil and gas production is a long-term process that will require significant investments in exploration activities and is not expected to be achieved in the short term.

Beyond reunification of the state’s vital institutions, the deep marks left by decades of conflicts and poor management call for an institutional assessment of existing structures that leads to sweeping, deep and aggressive structural reforms on a national scale spearheaded by a strong political leadership. Initiatives to deal with Yemen’s post-war challenges can have limited success unless they integrate with Yemen’s already existing institutions and falls within a broader far-sighted reform vision. Economic transformation and true reforms are a paradigm shift and a national political process of the highest degree.

[4] This is based on data collected from annual reports of the Central Bank of Yemen for the years 2010-2015.

[13] This is based on data collected from annual reports of the Central Bank of Yemen for the years 2010-2015.

[15] The treasury bills offer high yields at a nominal interest rate of about 16%. This high rate had attracted the investments of commercial banks to take over around 80% of the total value of treasury bills during 2010-2014. See: Yemen Socio-Economic Update- Issue 15, June 2016.

[16] International Trade Centre (ITC), Market Analysis and Research. “Trade Map.” An online database of monthly, quarterly, and yearly trade statistics from the most aggregated level to the tariff line level for international business development, covering import and export values, volumes, growth rates, and market shares. It provides indicators on export performance, international demand, alternative markets and competitive markets, as well as a directory of importing and exporting companies. It covers 220 countries and territories and 5,300 products of the Harmonized System. Hydrocarbon products are classified under the Harmonized System (HS) code 27. Under this group, the two main hydrocarbon exports from Yemen to the world are crude petroleum oil (HS code 2709) and petroleum gas (HS code 2711). http://www.trademap.org/Index.aspx.

Seen Only in a Saudi Shadow: Why the US Misunderstands and Missteps in Yemen October 1, 2019 Analysis

The Sana’a Center is Seeking a Full-Time Translator September 18, 2019 News

The Sana’a Center Editorial Where Coalitions Come to Die September 4, 2019 The Yemen Review