A Day in Line

With fuel shortages gripping Houthi-held areas, queues at gas stations in the Sana’a were seen extending for kilometers on June 17, 2020 // Sana’a Center photo by Asem Alposi 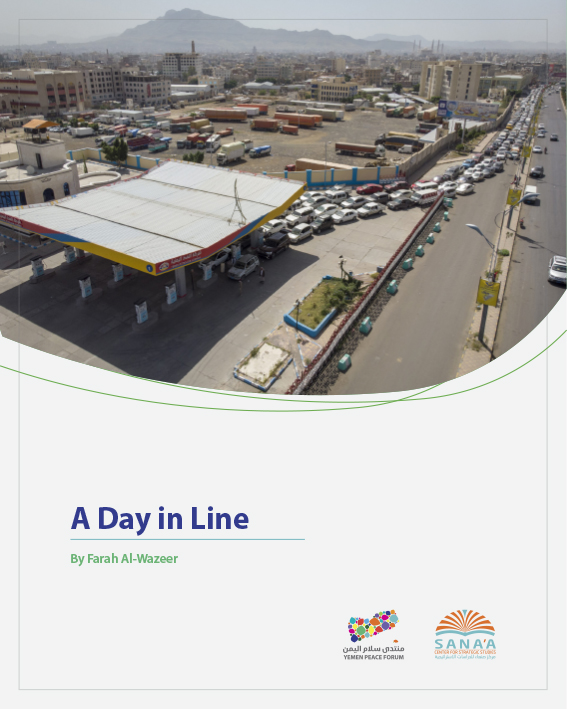 June 2020: My alarm went off at 6 a.m. that Monday. Normally, I would start getting ready for work at that time, but this particular morning I wanted to try something exceptional. I wanted to fill my car with gas.

I had seen the queues of cars lined up outside petrol stations, so I knew it might take some time. I told my colleagues I would be two hours late.

That month, a petrol crisis had begun in my home city of Sana’a – one more side effect of the war that we had been living through for the past five years and one that has made long lines at gas stations a feature of the Sana’a cityscape. As the fuel crisis escalated that June I drove back and forth to work, looking at the long lines of cars waiting for fuel and wondering when my time would come. Then one day it happened: The yellow light on my fuel gauge lit up. It was my turn.

I talked with two friends, Shaima’a and Safa’a, on Sunday evening, and they agreed to come along. We had two options: stand in line and buy fuel at the official price, about US$10 for 20 liters; or try the black market and pay double that price. Black market petrol is typically doctored with other ingredients, which can badly damage a car. We decided to wait in line. In Sana’a, that meant going to the women-only petrol station on Faj Attan Street.

On Monday morning, Shaima’a, Safa’a and I met at a cafeteria for breakfast. We used to eat at this place when we were in university, so we started the day reminiscing about better times before the war. By 7:45 a.m., when we arrived at the petrol station, there was already a long line of cars waiting under the summer sun. We each had to make a long U-turn to arrive at the end of the queue. Once we were in place, we couldn’t even see the petrol station.

Cars were moving slowly, infrequently. While the line was stationary, my friends joined me inside my car, so we could chat to pass the time, a rare treat as we hadn’t seen each other since the beginning of the COVID-19 crisis. As cars ahead of us started moving, Shaima’a would leap out of my car and run to hers to inch forward. It was early, and we were still having fun.

Children and men on foot were weaving in and out of the line of cars, selling cold water, chewing gum, nuts, spices and boiled eggs, as well as cups of Adeni tea. Later, I discovered that some restaurants even offered free delivery to drivers waiting outside Sana’a petrol stations.

On that Monday morning, a young man handed out discount coupons for a car wash at Car Care, a woman-run business. By 11 a.m., we still hadn’t reached the station – in fact, we still couldn’t even see it. I was getting frustrated and hot. Safa’a gave up, leaving so she could start her workday. My car’s air conditioning didn’t work. Even if it had, I couldn’t have used it; it would have drained all the petrol I had left.

A little after 11 a.m., I had almost reached the turn around where I would actually be able to see the petrol station in the distance. That is when street merchants began informing the women in line that the station had closed and would reopen at 3 p.m. I jumped out of my car, joining other women who had emerged from their vehicles, furious at this news. We demanded that the station remain open. Why close now, when we’ve been waiting since early in the morning? The station guards told us that the authorities had mandated these hours in order to conserve fuel. A petrol station conserving fuel? How weird!

No one moved. We decided to leave our cars in line until the station reopened. Shaima’a and I decided to go home in the meantime. We tried to find a taxi to take us, which would cost us double the usual price, but we couldn’t find one. Luckily, my sister was close by, so she gave us a lift. At 2:45 p.m., Shaima’a and I rejoined our cars in the queue, ready to get this long day over with.

By 3:00 p.m., when I was finally almost at the station, I saw several attempts to cut the queue. Two women were trying to push cars into the station entrance. Other women offered the station guards small bribes to let them pass. All the women who had been waiting refused to let any newcomers cut in. I shook my head at the women trying to pay bribes. These are some of the selfish people who are destroying our country.

Ten minutes later I was at the petrol station gate, where I had to wait another five minutes for the cars in front of me to finish. Everyone was allowed to take just 40 liters of petrol due to the shortage. Then, a station guard opened the entrance gate and I drove through toward the four fuel pumps. It felt like a huge accomplishment.

Two women approached my car. While one took photographs of the front and back of my vehicle, the other handed me a small piece of paper. This paper stipulated that I could not return to this petrol station for the next four days. This is because some people suck the petrol out of their cars after filling up and sell it on the black market for double the price. I laughed and told the woman she had nothing to worry about. There was no way I would be back in this queue so soon!

Finally, I arrived at the pump. I stopped my car, and the man was about to start pumping fuel, when a young child holding an empty plastic water bottle approached him. The child was trying to convince the man to fill up his bottle, because his family home had been without electricity for several days, since the petrol for their generator ran out. The boy told the man that he had a younger brother who was afraid of the dark.

“Are you going to sell it?” the attendant asked the boy.

The little boy swore he would not.

The man quickly filled the boy’s bottle, without anyone seeing. Then, the young boy gave me the bottle and asked if I could smuggle it out of the station. The area was full of guards, and I would have been in trouble if I had been caught. I apologized to the boy that I could not help.

The man by the pump told the boy to just hide the bottle under his shirt and make his way out of the station as fast as possible. The little boy did as the man said: he looked right and left, and ran like the wind. I was relieved to see him escape the station without being caught. That the man at the pump had been willing to take a risk to help the boy was a precious moment of grace and solidarity in our beleaguered city.

After another moment at the pump, I looked at my fuel gauge. The yellow alert was finally gone and the bar raised to full. I called my husband to inform him the mission had been accomplished. He was relieved: the queues at the men’s stations could take up to two days and typically involved five lines of cars and a bunch of gunshots. It was not unusual for fights to break out in line.

Almost a year later, these scenes still play out in Sana’a. The fuel shortage and the black market still exist, the queues are even longer and the suffering greater. Every day when I drive to work through the streets of Sana’a, I feel sorry for each car in the gas station queues and dread the days I am left with no choice but to join them. It is such a struggle to fight for basic necessities here, such a burden. 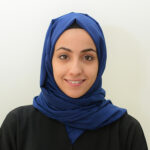 Farah Fahd Al-Wazeer
Is a graduate in International Business Managment. She works in the Communication, Advocacy and Partnership unit at a national agency called SMEPS