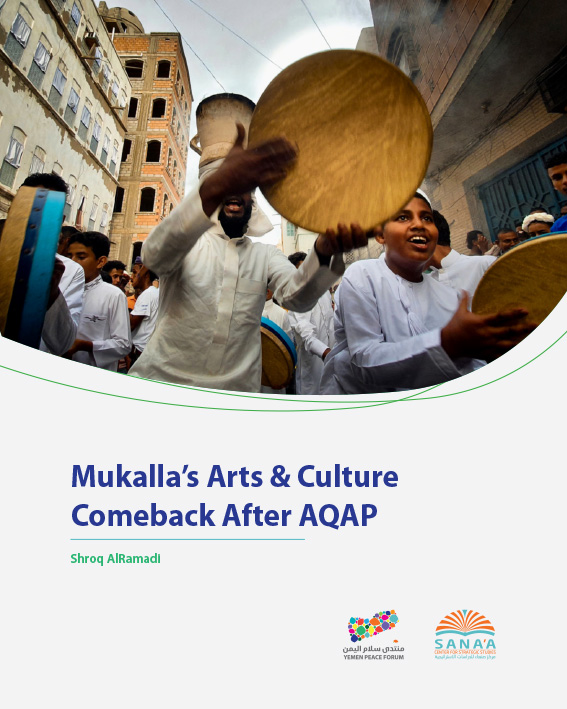 When Al-Qaeda entered the city of Mukalla in April 2015, the cultural and artistic movement froze. Artists were intimidated, writers were muzzled, and performances were banned. Cultural visionaries and artists were singled out and targeted by AQAP. Today, five years after Al-Qaeda was forced out of Mukalla, art is slowly making a comeback. “Most of our work was on near-zero budgets to the point where we had to use the same banner 15 times,” says Shaima bin Othman, who co-founded the Meemz Arts Initiative.

Meemz was launched in 2018 under the theme “Art Returns” with the objective of promoting arts and artists and re-introducing them to the job market. Since then the organization has held more than 17 events, including workshops to empower artists and teach graphic design, film-making camps, karaoke events, and oud playing. Bin Othman, the young Hadrami woman, sees her role as two-fold. First, to resurrect the arts scene post Al-Qaeda. Second, to help break the long pattern of male dominance of local arts. Bin Othman hopes that, along with other women in Mukalla, arts can play a role in reducing gender segregation in the city.

Another group, the Takween Cultural Club in Mukalla, founded in 2017 by six young women in their late teens and early 20s, is also helping to break gender barriers (Full Disclosure: I am one of the founders). The club, which started as an informal group to teach school children, has since expanded to include both male and female artists, who can collaborate and work with one another across gender lines. The club has hosted poetry readers, book groups, training sessions, and film viewings all with the aim of reviving Hadramawt’s cultural and artistic heritage.

However, there are still challenges. Even though AQAP fled Mukalla in early 2016, there are still remnants of extremist ideology in the city and not everyone is happy about mixed gender events. In 2019, for example, young people from the dance group, Wax on Crew, were arrested by local authorities for engaging in so-called “extraneous practices.” Authorities forced the dancers to sign pledges to give up hip-hop performances. This was later revoked following a local outcry, and the dancers were subsequently invited to perform at a government-sanctioned ceremony.

The Year Without Art

When Al-Qaeda began its rule in Mukalla in 2015, it initially attempted to govern through a front group, calling itself the “Sons of Hadramawt.” It was always clear, however, who was in charge. Al-Qaeda banned street art and removed any public depictions of women, including billboards and cardboard cutouts in markets and shops. The group also launched a broad campaign to demolish Sufi shrines, which represent a branch of Islam they considered a form of religious heresy. To help with this, Al-Qaeda formed the Al-Hisbah Authority (religious police) which, among other things, prepared lists of sites to be demolished. One of these, the famous Mausoleum of Yaqub, was destroyed in 2015. Al-Qaeda exhumed graves, plundered the mausoleum, and then blew up the shrine. The explosion caused extensive damage to the surrounding houses. The Mausoleum of Al-Mahjoub and the Mausoleum of Bazara’a Mosque were later destroyed as well.

Al-Qaeda also banned Mawlid celebrations for the birthday of the Prophet Muhammad, as well as the accompanying haḍra lectures, which discuss the life of the Prophet and are often broadcast via loudspeaker in mosques, on the pretext that these were an unacceptable Sufi heresy. Many in Hadramawt worried that Al-Qaeda’s actions would not stop there, but that the group would eventually ban anything they considered heretical, including many local religious practices such the al-khatayim, which celebrates completing a reading of the Quran, and is held throughout Hadrami cities during the month of Ramadan. Instead, AQAP disseminated religious and jihadist hymns, while banning wedding parties, art exhibitions, theatrical performances, and international book fairs and seminars.

Not surprisingly, there was little local resistance to Al-Qaeda’s crackdown on the arts. Some artists withdrew from public life, attempting not to draw attention to themselves. Others traveled abroad or abandoned their art during that period. “The year under the rule of Al-Qaeda was terrible,” Saeed al-Jariri, a Yemeni poet who fled to the Netherlands after receiving threats against his life, told me via text message. “The year under Al-Qaeda’s rule created an intellectual base within society that looks down upon creativity, and where creative people’s morality and values were defamed, overshadowing the fact that he/she reflects aesthetics of morality and values that elevate humankind and overcome the monstrosity that dwells in him/her.”

The Return of Culture

Hadrami culture, through the poems of Hussein Al-Mihdhar or the songs of Karama Mirsal, is widely known in countries throughout the Middle East and Asia, and its return is rightly celebrated. It has distinctive visual arts, dance, folk stories, songs, and the Hadrami “Dan” cadence. During the 1960s, Hadramawt was characterized by cultural diversity and creativity in various spheres, particularly theater. Over time, the theater was transformed from a private enterprise to a more official status, with performances supported and sponsored by the then-ruling sultan. Additionally, book fairs and publishing houses grew to become a significant aspect of cultural activity.

According to novelist Saleh Ba’amer, the 1980s were a period of cultural prosperity in Hadramawt and the south as a whole, despite the political conflict in that decade. He said Ali Nasser Mohammed, the former president of what was then South Yemen, contributed to the prosperity and flourishing of culture in a way that kept pace with the economic, political and social reality. This included festival performances that were widely popular and toured internationally.

Hadrami culture is also apparent abroad, among the notable examples being India and Indonesia. Hadrami migrants traveled through much of the world, particularly in Asia, bringing local culture with them wherever they went, as British explorer Sir Richard Burton took note of in the 19th century: “It is generally said that the sun rises not upon a land that does not contain a man from Hadramawt.” Those who returned to Hadramawt brought other customs back with them. For instance, the sarong is the prevailing clothing style in the coast and valley of Hadramawt. There are also many borrowed words used throughout Hadramawt, such as barouta bread, shitni peppers and oush’ar, an Indian spice, which are indulged by Hadramis in their daily meals. These foods are originally from India and have become, over time, an integral part of Hadrami cuisine.

Nonetheless, Hadramawt in general and Mukalla in particular held artistic and cultural events that reflected Hadramawt’s rich and distinctive heritage at May 22nd celebrations in 2005 that marked 15 years since the unification of Yemen. The highlight of the event was “A’aras Al-Juzur,” an operetta showcasing beautiful costumes and songs, and telling the story of how Yemeni lives have changed while also reviewing Yemen’s history of accomplishments and battles for victory and unity. In 2008, Mukalla hosted its first international book fair with 80 local and Arab publishing houses participating from Gulf states, Syria, Egypt, Lebanon and Jordan. Intellectuals and artists continue to write, publish, revive cultural and artistic seminars in the region and to celebrate civilization.

It is this history that groups like Meemz and Takween are hoping to build upon as they attempt to bring back a rich and diverse art scene to Hadramawt. 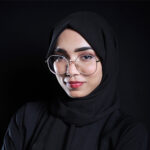 Shroq AlRamadi
Shroq is a social and cultural entrepreneur with extensive volunteering experience, as well as founder and CEO of Takween Cultural Club.