Protest of the Walls 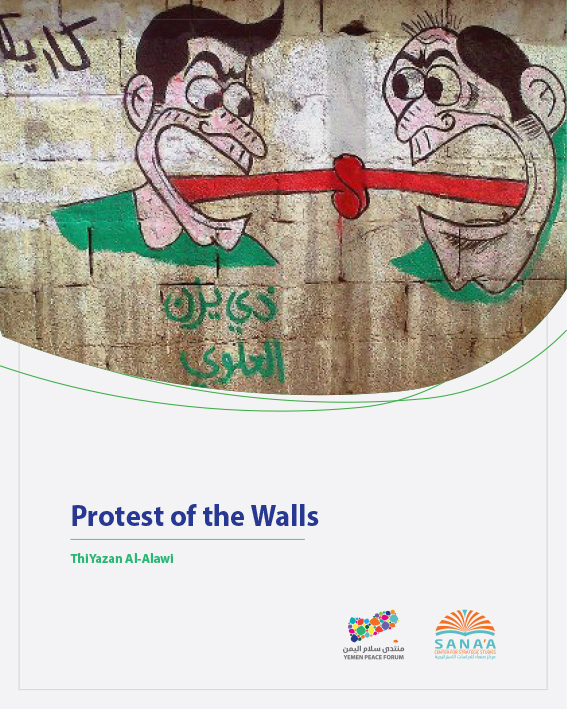 I have been drawing on Sana’a’s walls for years. In 2012, when I was a high school student, I launched my first art campaign: “Caricature of the street.” I used to save up my allowance to draw in the streets as a way of expressing my opinion and echoing what the youth of the Arab Spring revolutions were doing. My murals highlighted a range of issues from politics and the crimes of Al-Qaeda to famine and censorship, which directly impact me as an individual in the community and as an artist.

Over time, my fingertips got accustomed to the brush until it became like a sixth finger. I was addicted to the smell of paint. I’d stand for hours drawing, wrapped up in the dream of freedom of speech and change. Each color meant a lot to me. Every line, dot, and shape made me more aware of the importance of art and how to reflect reality in a street mural.

Beginning in 2014, people started to stop and ask me what I was drawing; I’d respond with the enthusiasm of the novice, saying I was expressing myself by drawing a caricature about the National Dialogue Conference, the post-revolution transition process that began the previous year. My drawing was a dream to resolve Yemen’s long-standing problems. Some thought the mural represented a pessimistic view, but I observed the situation and predicted the failure of dialogue. The way the international community was dealing with Yemen was thoughtless and rash, and ignored the conflict that was happening outside the conference’s halls.

A Dose of Art and Life 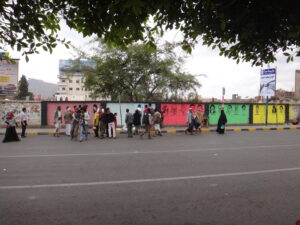 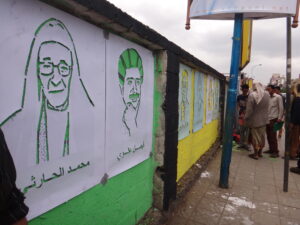 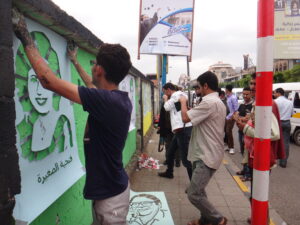 After the Houthis entered Sana’a in September 2014, I launched a new art and social campaign called “Art and life” aimed at strengthening community peace. I drew the faces of 21 of Yemen’s most prominent singers, as a tribute to these artists and the cultural heritage they have imparted. First, I drew the faces on paper then in black on the walls. Several friends and passersby gathered around and helped paint, using the colors of art and life. Our laughs echoed in the street while we documented a significant art phase in Yemen’s modern history. It was a carnival of colors, celebrating these figures whose songs we still listen to until this day. The voices of these singers are an integral part of  societal memory and cultural heritage for Yemenis, whether in the fields, rural areas or city streets. I considered it my duty as an artist to document something we are proud of, something that should be protected and spread everywhere.

Peaceful Revolution on the Walls 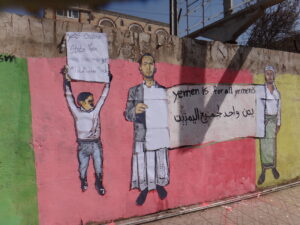 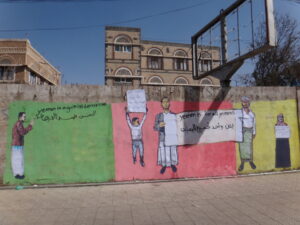 Later, in December 2014, I drew a mural on Al-Qeyada Street documenting the slogans and civil demands of Yemeni youth. These slogans have a value that will continue to exist despite the changes in the political situation in the country. The tents and squares of the revolution may be empty, but these murals serve as documentation of the peaceful protests that changed Yemen. I used to say: “If the voice of the youth goes silent in the street, the walls will continue to speak.” I still believe this. The campaign, “Caricature of the street,” bore witness to the situation from 2012 until September 2014, a phase that was characterized by the participation of the youth in many fields, and by freedom of opinion and expression. 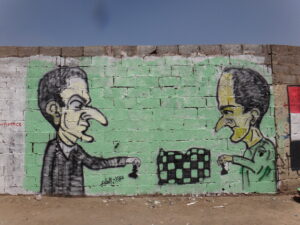 Ever since the Houthis seized the capital Sana’a in September 2014, I felt a sense of responsibility. The Houthis were not the only thing that raised my fears during this period. I went out to the street two weeks before the launch of Operation Decisive Storm in March 2015 to paint murals about foreign interventions on Al-Sabaeen Street. I drew two cold figures moving chess pieces on a board in the shape of Yemen’s map, divided into squares. I did not know then I was predicting a new foreign intervention that would tear my country apart.

Color on Dried Out Newspaper 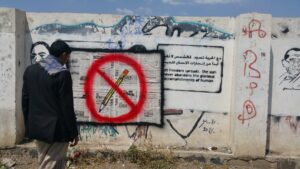 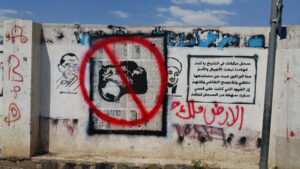 For a while I stopped drawing. I did not know how to resume my art activity. During the first months of Operation Decisive Storm, Sana’a became a ghost town. Streets were deserted and people were scared. The silence was what frightened me the most. There wasn’t room for art or life when there was war. The issues I drew about seemed marginal compared to things like famine, displacement and constant death. Daily life changed in every way. The city was no longer tolerant of newspapers or views that opposed the Houthi movement.

And just like war chooses its victims, it also chooses its merchants. I wondered how I, as a painter, could maintain the brightness of my colors and not sink in despair or hatred. How could I continue to draw based on my slogan that art is part of my daily life? How could I depict the humanitarian suffering that struck us? 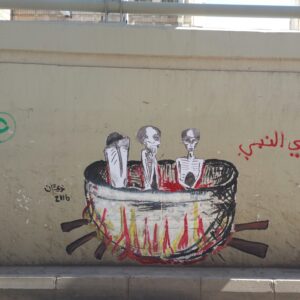 Sometimes, I wondered how I could draw when people were starving and asked myself if my art would make any difference. I did not know the answer but I knew that I had to draw. I had to document what I was seeing. I thought of how to proceed with my art. Since all newspapers were banned in Sana’a, I decided to reproduce the newspaper and turn it into a protest poster. I looked for newspapers at kiosks and shops and eventually I found some that I could reuse as canvases for my art.

When I first started drawing, my aim was to go to the street to express my opinion and enjoy drawing. Today when I go to the street I hide my paints and I’m afraid of being stopped. But Yemen is full of events, crimes and stories which the world must not forget. Art is a duty. I must document what I am living. Every second I live is a second I feel I must draw for the future. One day the war will end. The walls may go back to how they were and the world will forget what we lived through. My hope is that these murals and other works of art remain to narrate what the war put us through amid the world’s silence. 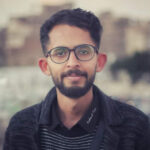 Thiyazen Al-Alawi
Is a Yemeni artist who has launched several campaigns and art projects on Yemeni streets since 2012.