Mukalla has witnessed protests periodically over the past three years, including this one in September 2018. Public anger often boils over regarding rapid inflation and failing public services. // Sana’a Center file photo by Suliman al-Nowab 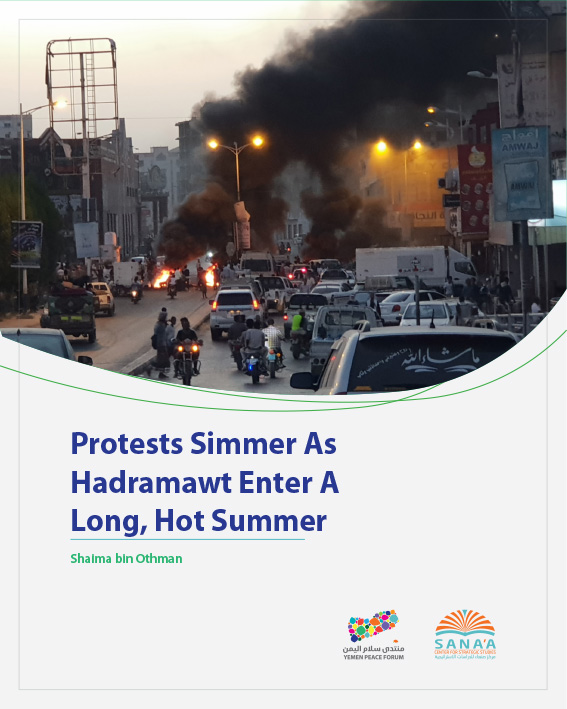 For much of the past three years, periodic protests have rocked Mukalla, a port city and the capital of Yemen’s Hadramawt government. The cause, typically, is Mukalla’s poor electrical grid and frequent outages, although at times politics and Yemen’s broader war have bled into the protests. In turn, the authorities have continued to intensify their response this year in attempting to quash the unrest. In March 2021, for instance, it was university students who took to the streets, frustrated with the declining value of the Yemeni rial (YR) and rising fuel costs. Days after that, security and military forces cracked down hard on yet another protest, firing live and rubber bullets at the demonstrators, killing one and injuring several others.

While Bahsani’s emergency declaration effectively banned public demonstrations it has done little to change the public’s mood. Electricity coverage is still poor and the rial recently reached an all-time low in southern Yemen, trading at YR1,000 against the US dollar.

A Multitude of Protests

The student protest in March was organized by the Hadramout University Students’ Union, and leaders demanded the government reverse its decision to raise fuel prices, prevent the devaluation of the currency, control the cost of food and housing while also reducing school fees to account for the rial’s loss in value. Many protestors have blamed Al-Bahsani, the governor, who is also head of the 2nd Military Region and commander of the Hadrami Elite Forces, which are backed by the UAE. Al-Bahsani has dismissed many of these as “paid saboteurs.” There have also been frequent demonstrations against reduced purchasing power, violations of human rights, as well as calls to release political prisoners.

Even women have taken to the streets. In March 2021, women marched with their children, calling for an end to corruption and asking officials to deal with the currency collapse and rising prices.

Their demonstration, as well as that of the students, came at a time of rapidly rising fuel prices in Hadramawt. Between January and March 2021, fuel prices rose 30 percent. For the student protesters, this means that many could no longer afford to travel to university for classes.

Tariq Banni, a student at Hadramout University said, “Dozens of students from my city will have to stop studying if the (situation) continues in this manner. Parents who receive a monthly salary of YR70,000 cannot provide a YR25,000 transportation fee per child. Not to mention the tuition fees and the student’s needs of books, stationery, and other items.”

Governor Al-Bahsani formed a committee in early March to look into the students’ demands and produce recommendations. But with no solution in sight, the governor suspended university operations under the justification of a new wave of COVID-19.

In June, universities reopened, but fuel prices remained high. In coastal Hadramawt, local authorities took no steps to remedy the situation. However, in Wadi Hadramawt, Esam al-Kathiri, vice-governor for Wadi Hadramawt and Desert affairs, formed a committee that recommended supporting all student transport costs to offset the fuel price increases. Unlike coastal Hadramawt, Wadi Hadramawt is relatively less socially unstable, with better service provision and electricity. Since 2018, there has only been one significant public demonstration, with protesters denouncing the security situation, especially the increasing cases of assassinations.

Along with the protests, concerns about rights and freedoms are intensifying due to the manner in which Al-Bahsani is dealing with citizens. On May 27, 2020, authorities arrested several individuals working at the Governor’s Office, including Abdullah Bukair, a media specialist, Ahmed Alyazidy, an IT specialist, and Fahmi Baafia, a cook. On June 3, the Specialized Criminal Prosecution (SCP) issued a press release justifying the detentions, claiming that the arrests foiled an assassination plot targeting Governor Al-Bahsani. However, no arrest warrants were ever issued.

After four months of detention, and amidst an ongoing campaign by journalists, human rights organizations, and activists, the Specialized Criminal Prosecution in Mukalla agreed to start prosecution procedures. In April 2021, nearly one year after the arrests – following a drawn out trial in which no solid evidence was ever produced, protests, and a hunger strike by the detainees, which led to their deteriorating health, according to Reporters Without Borders – Bukair and the others were released.

According to the Media Freedoms Observatory in Yemen, Hadramawt recorded 49 cases of violations against members of the press from 2015 until September 2020, including kidnappings, arrests, threats, and torture. Local activists claim that authorities established a “monitoring room” to track journalists’ and activists’ posts on social media.

Muhammad al-Yazidi, a local journalist, said on Facebook that in September 2020 he was threatened, pursued, and the victim of an attempted kidnapping by armed men in civilian clothes, who he later said were affiliated with Military Intelligence in Hadramawt. The security authorities in Hadramawt arrested his brother two months later, in November, which Muhammad said was an attempt to intimidate him and stop him from reporting on corruption cases and the collapse of public services in Hadramawt. The authorities are currently pursuing Yazidi through the courts and he has fled Mukalla.

At the same time, Mu’taz al-Naqib, a reporter for Yemen Shabab TV, was assaulted and his equipment confiscated by soldiers from the 2nd Military Region. Also, Al-Mahariya TV correspondent Zakaria Muhammad was arrested after covering a protest in front of the gate of the governorate building.

As Hadramawt’s infrastructure continues to languish it is likely that the protests will also continue, particularly as the summer heats up and the difference between the availability of electricity in Wadi Hadramawt and Coastal Hadramawt becomes more pronounced.

Shaima Bin Othman is a policy analyst, activist, and social researcher. She is a fellow with the Sana’a Center’s Yemen Peace Forum and with the Yemen Policy Center. She has previously published in al-Madaniya magazine and is currently an MA candidate in Middle East studies at the American University in Beirut.