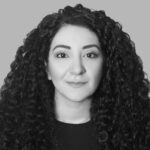 Amani Hamad is a translator at the Sana’a Center for Strategic Studies. Prior to joining the Sana’a Center, Amani worked as a Beirut-based translator and news writer for Al-Arabiya English online platform for almost seven years. She translated news reports, interviews, op-eds and feature stories that mainly focused on the Arab world, particularly the Gulf. Before joining Al-Arabiya English, she worked for over three years as a news writer and fixer for Beirut-based NOW Lebanon, a Lebanese news website focused on the Middle East.