Abyan Battles to Determine Fate of the Riyadh Agreement

On May 11, forces loyal to President Hadi launched a massive military attack against Southern Transitional Council (STC) forces in Yemen’s southern governorate of Abyan. The pro-government forces are attempting to seize Zinjibar, the governorate’s capital, which would put them in position to advance toward the interim capital, Aden.

The renewed fighting came as part of the government’s effort to change the military equation in the South and improve its negotiating position related to the Riyadh Agreement. Struck in November 2019, the deal halted fighting between the government and STC forces, but implementation of power-sharing political and security arrangements has faltered. The clashes also followed the STC’s decision to declare self-rule across southern Yemen, which had little practical impact beyond Aden governorate but led Hadi’s government to push back in Abyan.

In reality, the Abyan battles are a new round in an ongoing conflict within the anti-Houthi camp over political authority among parties with different regional backers. On the government side is President Hadi and the Islamist Islah party, who have monopilized authority in the government. Excluded from power is the STC and, to a lesser degree, the National Resistance Forces led by Tareq Saleh, which have shown implicit sympathy toward the STC without providing military support. The first side is allied with Saudi Arabia while the second is backed by the United Arab Emirates.

The recent clashes are unlikely, however, to alter power dynamics in the southern arena without the Arab coalition intervening in favor of one party or the other – which appears unlikely as Riyadh and Abu Dhabi aren’t looking for further friction – or unless the government fully mobilizes its military resources to engage in a decisive battle. Such a fight on Aden’s outskirts, however, would jeopardize the overall fight against the Houthis, potentially pulling government forces away from active fronts in Marib and Al-Bayda and leaving them vulnerable to Houthi attacks. A counter-mobilization of additional STC forces to Abyan would also imperil frontlines against Houthi forces in Al-Dhalea and Lahj. 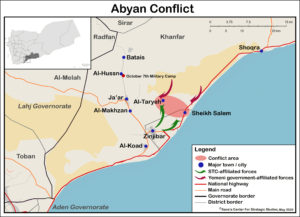 The government’s attack on Abyan has been carried out via two axes. The first runs west along the coastline that links the city of Shoqra, which is under the control of government forces, and Zinjibar, which is under STC control. Current frontlines are in the area of Sheikh Salem village. The second avenue of attack has seen government forces advance from Khanfar district and pass through Al-Taryeh to Ja’ar, north of the city of Zinjibar. The October 7 camp in Al-Hussn is a base for southern forces loyal to the STC. Given its strategic position, whoever controls the camp essentially controls the governorate capital.

The government’s advances during the first days eventually collided with the STC’s defense fortifications in Sheikh Salem. Government forces then shifted toward the second axis, with limited progress in Al-Taryeh before STC forces regained their positions there.

The solid balance of military power in Abyan – which is the home governorate of President Hadi – has not allowed any side to impose its absolute will. The STC has generally maintained a defensive strategy while launching occasional counterattacks, one of which resulted in the capture of Brigadier-General Saif al-Qufaish, commander of the 115th Infantry Brigade. However, the STC forces mostly prefer trench warfare in order not to be exposed to government artillery. Meanwhile, government forces have undertaken ground attacks on a daily basis, with little progress to show for it.

The confrontation has also seen both sides rush to mobilize forces to the frontlines in an effort to tip the scales. The government has relied on a combination of southern forces expelled from Aden during the last round of fighting in 2019 – the 1st, 3rd and 4th Presidential Protection Brigades and the 39th Armored Brigade – along with military forces based in Shoqra, and in Ataq in neighboring Shabwa governorate. These forces were supported by northern military forces from the Yemeni army that came from Marib, including the 159th Brigade commanded by Seif al-Shadadi and others commanded by Saad bin Maaily.

The government also has brought in additional battalions from the first military zone in Sayoun, Hadramawt, drawing the south’s largest governorate into the fray. The redeployment pushed the STC’s command in Hadramawt to hint at resorting to “popular resistance” to cut the supply lines between Hadramawt and Abyan. In response, Hadramawt’s governor, Faraj Bahsani, shifted closer to the pro-Hadi camp while government Interior Minister Ahmed Maysari ordered the dismissal of the security director along Hadramawt’s coast, who is affiliated with the STC and UAE.

After battles erupted in Abyan, STC president Aiderous al-Zubaidi called in a televised speech for a “general mobilization to defend the South.” STC reinforcements arrived from Lahj, Aden and Al-Dhalea, primarily the 3rd and 5th Support Brigades and the Thunderbolt Brigade, in addition to the 1st Mountain Infantry Brigade from Aden led by Abu Taher Al-Bayshi, and Shabwani Elite forces that had been expelled from Shabwa during 2019 fighting with pro-Hadi forces. Later on, military units from the Giants Brigades, which played a leading role in the 2018 coastal offensive culminating in the battle for Hudaydah, also joined the STC force. The current fighting has turned into a battle of narratives: The STC depicts it as a conflict between the North and the South; the government calls it a legitimate battle against separatist rebels; and another faction within the government views it as an internal southerner vs southerner dispute.

The Yemeni government’s offensive in Abyan was, on the one hand, a tactical maneuver within the framework of the Riyadh Agreement in which it received an “orange light” from Saudi Arabia to push back against the STC’s self-rule pursuit and punish it for pressuring government loyalists in Socotra and Hadramawt. At the same time, hardliners within the government have argued that capturing Zinjibar and advancing toward Aden would impose a beneficial new fait accompli in the south. Doing so may ignite wider war and collapse the Riyadh Agreement, two Saudi red lines hardliners view as worth breaching to end the STC’s challenge for authority. For the STC, declaring self-rule had the tactical purpose of forcing Saudi Arabia to pressure the Yemeni government into cooperating with the implementation of the Riyadh Agreement. In terms of long-term strategy, it also could serve its broader goal of building an independent southern state.

Similar maneuvering by the rival sides has been seen twice before in the South since 2017, with each armed confrontation followed by a limited political breakthrough. In January 2018, the STC and government forces in Aden clashed, resulting in the expulsion of government forces. Then in October of the same year, political tensions eased with the removal of controversial prime minister Ahmed bin Dagher and his replacement with Maeen Abdelmalek Saeed, who was deemed acceptable by the government, the STC and both of their backers, Saudi Arabia and the UAE. In August 2019, an armed confrontation erupted between the STC and the government in Aden and spread to Shabwa. The two parties signed the Riyadh Agreement in November, which readjusted the political relationship between them and their regional allies. The new wave of escalation could result in a further political adjustment based on the Riyadh Agreement.

It has not, however, cut the lines of communication between the government’s backers in Riyadh and the STC’s in Abu Dhabi. Following high-level communication between the two countries’ leadership, Saudi Crown Prince Mohammed bin Salman invited Aiderous al-Zubaidi, who has been based in the UAE, for talks in Riyadh, a gesture that was accepted by the STC chief. Besides halting the current military escalation, the Saudis are seeking to convince the rival parties to resume their work negotiating the Riyadh Agreement. According to local media, Riyadh recently submitted amendments that would synchronize policy and security aspects of the accord. The calls for deescalation have been positively received among the STC leadership and the dovish faction of the government, led by the prime minister and representatives of the socialist and Nasserist parties, according to political sources within the government and STC. Meanwhile, government hawks, which advocated for restarting conflict to prove their military strength before any renegotiation of terms with the STC, appear to oppose accommodation before cementing gains on the ground.

If the situation continues as is until the STC’s leadership moves to Riyadh to resume negotiations, such a tie would be positive for the STC. It would have imposed a new fait accompli in Aden through its self-rule decision then solidified a military deterrence formula in Abyan. The STC, then, would have confirmed its political and military domination in Yemen’s southwest.

The government, meanwhile, is caught between attempting further escalation on its own or reconciliation. Its military surge has stalled and Saudi Arabia hasn’t shown any sign it is interested in carrying out or supporting a decisive battle for Zinjibar, which would be perhaps the only way to shake the STC’s hold in Aden. If it chooses deescalation, Hadi’s government must be prepared to make political concessions to the STC in terms of government positions and a partnership in ultimate peace negotiations — essentially the path laid out in the Riyadh Agreement — which it repeatedly has tried to evade.

Hussam Radman is a journalist and Sana’a Center research fellow who focuses on southern Yemeni politics and militant Islamist groups. He tweets at @hu_rdman.