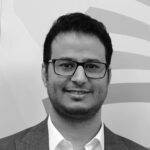 Hussam Radman is a researcher fellow with the Sana’a Center for Strategic Studies. His research focuses on Yemen’s Southern Movement and militant Islamist groups, such as al-Qaeda in the Arabian Peninsula, the Islamic State group, and armed Salafist factions. He is also a correspondent for Dubai TV and has previously worked for the newspapers Al-Sharea in Yemen and Egypt’s Al-Ahram.

In Focus: How I Narrowly Escaped Death at Aden Airport

Only a limited number of journalists and government officials were supposed to be present at Aden International Airport on December 30, 2020. However,…

One year ago, on November 5, 2019, the internationally recognized government of Yemen and the Southern Transitional Council (STC) signed the Riyadh Ag…

A year after his appointment as the UN’s special envoy to Yemen, Martin Griffiths opened a branch for his office in the interim capital, Aden, whe…

Abyan Battles to Determine Fate of the Riyadh Agreement

Five years of civil strife in southern Yemen has given rise to southern centers of power, some oriented toward secession and others seeking the semi-a…