Following an escalation in recent months, there was some progress by the end of November in mediating a solution to end the struggle between the two fragmented branches of the Central Bank of Yemen (CBY) over access to financial data from the country’s commercial and Islamic banks and money exchange outlets (for details, see: Yemen Economic Bulletin: Battle to Regulate Banks Threatens to Rupture the Financial Sector). According to banking officials in Sana’a who spoke with the Sana’a Center Economic Unit on condition of anonymity, the deescalation came after the two CBY branches – associated with the internationally recognized Yemeni government and the armed Houthi movement – agreed to the creation of a high senior banking mediation committee composed of the chairmen of four Yemeni banks: International Bank of Yemen (IBY); Yemen Kuwait Bank (YKB); Tadhamon International Islamic Bank (TIIB); and Al Kuraimi Islamic Microfinance Bank (KIMB).

The main task of the committee is to negotiate with both CBY-Aden and CBY-Sana’a and reach a compromise that would mitigate the negative repercussions of the current contradictory financial measures imposed by the CBY branches, which are each seeking to unilaterally access financial sector data and solely regulate the operations of banking and money exchange institutions across the country. Also, toward the end of November, CBY-Aden reached an unsigned agreement with Yemen Kuwait Bank (YKB) to gradually allow the former access to the bank’s data in return for the suspension of punitive measures against YKB. A similar deal is reportedly being worked out with IBY.

Broadly speaking, these compromises come as part of a broader deal for CBY-Aden to temporarily pause escalatory measures against banks for their failure to provide it with transaction and operations data. According to the Yemen Banks Association, CBY-Aden began leveling fines in June against banks and money exchange outlets for non-compliance. In October, the board of directors and executive managers of three banks – IBY, YKB, and the Yemen Bank for Reconstruction and Development (YBRD) – were referred to the public prosecution office in Aden. The November deal seeks to allow the banks to meet obligations related to the preparation of financial statements by the end of the current fiscal year while also awaiting the outcome of broader settlement efforts.

Yemeni rials denominated in newly printed banknotes, issued by the CBY-Aden since 2016, experienced rapid fluctuations in government-controlled areas during the month of November, with the disparity in the exchange rate between old and new rials reaching its highest point since Houthi authorities began implementing a ban on the circulation of new rials in areas they control controlled in January 2019 (for details, see ‘Yemen Economic Bulletin: The War for Monetary Control Enters a Dangerous New Phase’). As of November 30, the Yemeni rial in Aden depreciated to YR880 per $US1 in Aden compared to a stabilized exchange rate of YR600 in Sana’a, a divergence of roughly 47 percent. 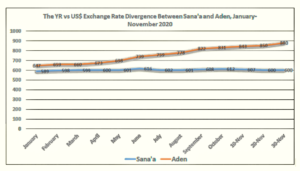 One of the primary factors behind the rial devaluation this year in areas under the nominal control of the Yemeni government is CBY-Aden’s expansionary monetary policy since January 2020, involving the overprinting of new banknotes, and the almost full depletion of its foreign currency exchange holdings. In November, the CBY-Aden received a batch of new rial banknotes printed abroad, amounting to YR180 billion in new physical cash, according to a senior banking official based in government-controlled territory. The Yemeni government has been printing new money in part to address its large fiscal budget deficit. Out of the YR180 billion delivered in November, close to YR100 was used to pay nearly two months of late wages to military and security units.

The expansion of the monetary supply in government-held areas has overwhelmed the relatively weaker supply-side economic activity and its ability to absorb inflationary pressures. The rial’s value outside Houthi-held areas has been also negatively influenced by its diminishing utility for conducting trade, with most commercial traders transporting goods to southern markets now only accepting payment in Saudi riyals. This has contributed to depleting the already short supply of foreign currencies in Yemeni government-controlled areas. Meanwhile, the rial’s value in Houthi-controlled areas has stabilized comparatively over the last few months, owing to the reduced amount of currency in circulation and strict measures adopted by Houthi authorities to regulate and curb currency speculation in the parallel exchange market.

The month of November saw CBY-Aden continue efforts to strengthen its regulatory and supervisory measures over the financial activities of hawala networks and money exchange firms in an attempt to curb foreign exchange market imbalances and currency speculation. On November 22, CBY-Aden issued a circular, based on Decision No. (18) of 2020, to regulate access to financial remittance network systems and accounting information systems installed for money exchange activities, by mandating that software suppliers provide CBY-Aden with a report detailing contract conditions of software systems, whom they have been sold to, and the commencement date of systems’ operations, among other information.  The circular also made the future sale of money transfer and exchange software systems subject to approval from a designated department within CBY-Aden.

According to a credible banking source based in Aden, on December 1 CBY-Aden froze the balances of around 30 exchange outlets held with Yemeni banks in an attempt to prevent speculation and lessen downward pressures on Yemeni rial’s value on the parallel exchange market. These measures, however, will do little to address the other factors that are expected to drive further depreciation of the rial, such as the overall expansion of the money supply in government-held areas.

On November 19, the president of Sana’a-based Supreme Political Council aligned with Houthi authorities, Mahdi al-Mashat, announced the suspension of salary payments to public servants working in Houthi-controlled areas. According to the statement, the decision was attributed to limited resources and a deterioration of economic conditions linked to the “Saudi aggression” and more recently, the COVID-19 pandemic. In January, Al-Mashat had directed the Sana’a-based Ministry of Finance to pay half a salary every two months to all public civil and military sector employees operating under the control of the so-called National Salvation Government. This promise has not been met, with the Ministry of Finance in Sana’a only disbursing the equivalent of one and half month’s salary to each recipient over the first 10 months of 2020, equivalent to roughly YR110 billion, paid in three separate half month installments. Since late 2016, the majority of the approximately 1.25 million employees registered on the country’s public wage bill have been denied regular salary payments.

Over the same 10 month period, public revenues officially deposited into the coffers of CBY-Sanaa accounts by revenue agencies operating in the Houthi-controlled areas amounted to approximately YR530 billion or YR53 billion per month on average, according to an official internal report, seen by the Sana’a Center Economic Unit, from the General Department of the Public State Budget in CBY-Sana’a. According to the report, the Sana’a-based government’s expenditures for the period January-October 2020 were YR1.186 trillion, the fiscal budget deficit was YR652.5 billion, while the total debt owed to the central bank from deficit financing, was YR3.25 trillion.

Yemenis Must Face the Truth About Our War of Identities
November 20, 2020 Analysis

Shabwa: Progress Despite Turmoil in a Governorate of Competi…
November 19, 2020 Analysis

The Houthi Movement from a Local Perspective: A Resurgence o…
November 18, 2020 Analysis