The End of AQAP as a Global Threat 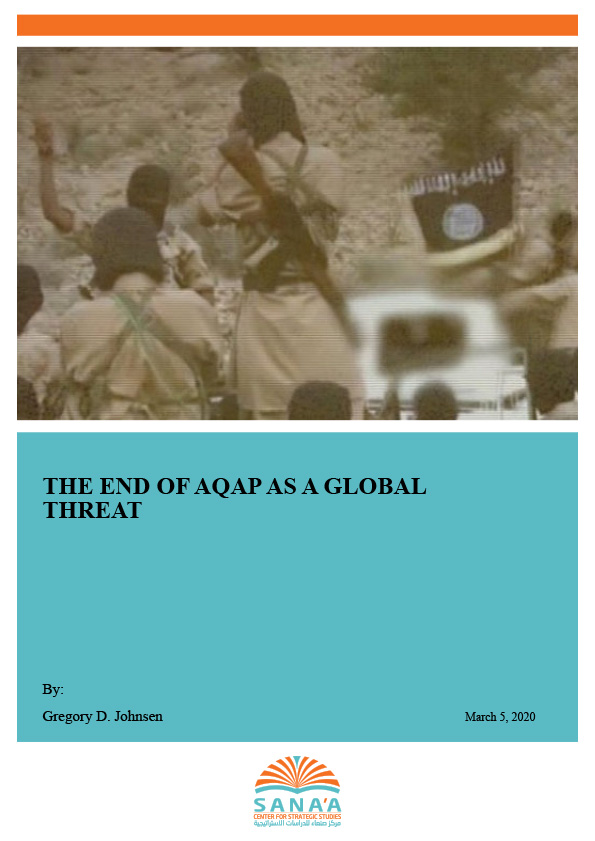 More than 15 years ago, in November 2003, the United States and the then Yemeni government of President Ali Abdullah Saleh defeated the first iteration of Al-Qaeda in Yemen. That victory did not last long. Less than two-and-a-half years later, in February 2006, 23 Al-Qaeda suspects tunneled out of a prison in Sana’a and into a neighboring mosque, where they walked out the front door to freedom.

Among the escapees that early morning were Nasir al-Wihayshi and Qasim al-Raymi. Both men had spent time in Afghanistan prior to the September 11, 2001, attacks on New York and Washington. Al-Wihayshi had been Osama bin Laden’s secretary and aide-de-camp, while Al-Raymi had been an instructor at one of Al-Qaeda’s training camps. According to one source, Al-Raymi would later marry one of Al-Wihayshi’s daughters.[1]

Over the next three years, Al-Wihayshi and Al-Raymi patiently rebuilt Al-Qaeda’s infrastructure in Yemen, resurrecting it from the ashes of its earlier defeat. Under their leadership, Al-Qaeda in Yemen transitioned from a small group capable of one-off attacks to an innovative organization able to threaten the United States. In January 2009, as part of this rebuilding process, Al-Wihayshi and Al-Raymi joined with two former Saudi detainees at Guantanamo Bay, Said al-Shihri and Mohammed al-Awfi, to form Al-Qaeda in the Arabian Peninsula, or AQAP.

Within months the new organization had wounded Saudi Arabia’s then-Deputy Minister of Interior, Mohammed bin Nayif, in an assassination attempt and managed to smuggle a bomb on board a Detroit-bound airliner on Christmas Day, 2009. The rise of Anwar al-Awlaki as a recruiter and jihadi orator and the bomb-making skills of Ibrahim al-Asiri led US intelligence agencies and analysts throughout the Obama years to frequently describe the group as Al-Qaeda’s “most dangerous affiliate.”[2] This continued to be the case even after the deaths of Al-Awlaki in 2011, Al-Shihri in 2013, Al-Wihayshi in 2015 and Al-Asiri in 2017. But the truth is: In recent years, AQAP has atrophied. The group no longer presents the same terrorist threat that it once did. It exists, yes, but only as a shadow of its former self. Indeed, 2020 could be the year the US decisively defeats AQAP and effectively eliminates the group as an international terrorist threat. (AQAP will likely continue to present a domestic threat within Yemen for some time to come.)

In late January 2020, the US carried out three drone strikes in Yemen, killing Al-Raymi, the head of AQAP.[3] The first two strikes, on January 25 and January 27, took place in Marib. But, according to Yemeni media, it was the third strike on January 29, which took place in Al-Bayda, that killed Al-Raymi and another member of AQAP, Abu al-Baraa al-Ibbia, as they were driving.[4]

The United States, of course, has been down this road before, believing it has killed Al-Raymi only to have it later revealed that he survived. Al-Raymi was also the target of the January 2017 SEAL raid in Yemen, which led to the death of Yemeni civilians including at least six women and 10 children under the age of 13, as well as an American soldier.[5] US suspicions turned out to be correct this time, however, with AQAP confirming Al-Raymi’s death on February 23.

Along with publicizing the killing of their former leader, AQAP also announced that Khalid Omar Batarfi, a Saudi national of Yemeni origin, would replace Al-Raymi as the group’s commander. According to a recent UN report, Batarfi has already been in charge of AQAP’s external operations since 2017.[6] Like Al-Wihayshi and Al-Raymi, Batarfi has links to the pre-9/11 Al-Qaeda. He trained at Al-Farouq camp in Afghanistan in 1999, and was in the country on September 11, 2001. Batarfi has done two stints in Yemeni prisons, from 2002 to 2004, when he was released by then-president Ali Abdullah Saleh’s government, and again from 2011 until April 2015, when AQAP took control of the port city of Mukalla in Hadramawt governorate and released Batarfi and more than 200 other prisoners from the local Central Security prison.

Batarfi will face an uphill task in attempting to resurrect a dying organization. AQAP is weaker and more disorganized than it has ever been. Al-Raymi, who was an effective operations commander, struggled as an overall commander and leader, famously giving an exceedingly dull 40-part lecture on a medieval treatise. The combination of Al-Raymi’s poor leadership skills, a surge in US drone strikes in 2017, on-the-ground operations by UAE-backed forces in Yemen and a jihadi rival in the Islamic State (IS) have all combined to erode AQAP’s strength in recent years.

Indeed, up until February 2020, the last international attack that AQAP claimed (at least some) responsibility for was the January 2015 attack on the French satirical magazine Charlie Hebdo in Paris. On February 2, 2020, AQAP released an 18-minute message, featuring audio from Al-Raymi (likely recorded between September and December 2019), taking credit for the December 6, 2019 shooting by Mohammed al-Shamrani at the Naval Air Station in Pensacola, Florida.[7] The attack killed three people and wounded several others. In the video, AQAP shows a two-page will from Al-Shamrani to his family, but otherwise provides no evidence to corroborate the impression that Al-Shamrani was acting on AQAP’s orders. Instead, the video and audio look as though Al-Raymi is trying to pass off an inspired attack as a directed one. This is the messaging of a weak organization attempting to look relevant after years of international inactivity.

Much like in 2003, AQAP is once again teetering and on the ropes. It has few qualified leaders and is no longer attracting many international recruits. The death of Al-Raymi is a blow; a few more losses like him and AQAP will be unlikely to recover, its international terrorist wing shattered.

Dr. Gregory D. Johnsen is a non-resident fellow at the Sana’a Center for Strategic Studies where he focuses on Al-Qaeda, the Islamic State and armed groups in Yemen. Prior to joining the Sana’a Center, Dr. Johnsen served on the Panel of Experts on Yemen for the United Nations Security Council. He is the author of ‘The Last Refuge: Yemen, al-Qaeda, and America’s War in Arabia’.

This commentary appeared in The War Over Aid – The Yemen Review, January/February 2020.