Taiz at the Intersection of the Yemen War 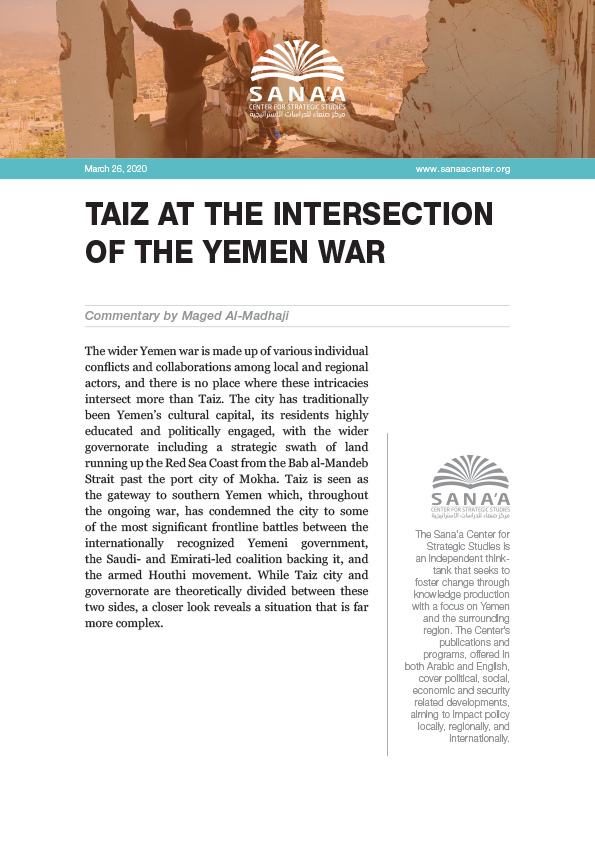 The wider Yemen war is made up of various individual conflicts and collaborations among local and regional actors, and there is no place where these intricacies intersect more than Taiz. The city has traditionally been Yemen’s cultural capital, its residents highly educated and politically engaged, with the wider governorate including a strategic swath of land running up the Red Sea Coast from the Bab al-Mandeb Strait past the port city of Mokha. Taiz is seen as the gateway to southern Yemen which, throughout the ongoing war, has condemned the city to some of the most significant frontline battles between the internationally recognized Yemeni government, the Saudi- and Emirati-led coalition backing it, and the armed Houthi movement. While Taiz city and governorate are theoretically divided between these two sides, a closer look reveals a situation that is far more complex.

The Lines Behind the Frontlines

The areas nominally controlled by the Yemeni government are in reality split among several parties. The forces of Tariq Saleh, the former President Ali Abdullah Saleh’s nephew who is close to the United Arab Emirates, control the city of Mokha and the entire coastal part of the governorate. National army forces affiliated with the Islah party control the city of Taiz. In areas next to them are militias led by Sheikh Hammoud Al-Mekhlafi, who is funded and supported by Oman and Qatar. The 35th Armored Brigade, which is close to the Socialist and Nasserist political parties and enjoys Emirati support, controls Al-Hujariah, a strategic area encompassing the southern and southeastern countryside of the governorate. The UAE also backs the Salafi-leaning Abu Al-Abbas Brigades; once a dominant force in Taiz city, since their defeat by Islah forces in 2019 the Abu Al-Abbas Brigades have been out of the scene and now have only a symbolic presence in Al-Kadha in the west of the governorate.

Frontlines in Taiz city between the Houthis and army forces loyal to Islah have not witnessed substantial changes since the former were pushed back from the southern half of the city in summer 2015, following the intervention by the Saudi-led coalition earlier in the year. In the governorate’s west, the city of Mokha along the coast and the surrounding countryside were liberated during the first months of 2017 by the Giants Brigades and the National Resistance Forces led by Tariq Saleh. Later, in January and February 2018, lines of conflict shifted east of Taiz city after the 35th Armored Brigade captured Al-Silw and Al-Qabbaytah districts.

Still, the Houthis maintained their hold north of the city, including the governorate’s three main roads. As a result, the group has imposed a harsh siege on Taiz since the summer of 2015, hindering the movement of people and goods. The only major road left for movement in and out of the city was the one extending south, passing through Al-Turbah toward Aden. Importantly, the Houthis also control the industrial zone north of the city, from which they gain hundreds of millions of rials every year through taxes on factory owners. Content with this state of affairs, the Houthis have implicitly exited the main conflict stage in Taiz, settling into a defensive framework and limiting skirmishes with opponents.

The nature of conflict in Taiz has changed from a war of the Yemeni government versus the Houthis to mainly internal battles among nominal partners in the anti-Houthi coalition. Between the end of 2017 and April 2019, armed conflict frequently erupted in Taiz as different parties aimed to seize control of the city. This battle was won by Islah, which expelled Abu al-Abbas forces following several rounds of fighting. The victory came at a cost, however, as political tension has increased and a crisis of trust has emerged between Islah and other political parties in the city.

Taiz has witnessed widespread security chaos and criminal acts, partly attributed to armed gangs loyal to political and military leaders who in turn appear loyal to Islah. Among the most notorious gangs are the one led by Ghazwan al-Mekhlafi, who is related to Sadeq Sarhan, the commander of Brigade 22 Mika and a supporter of the Vice President Ali Mohsen al-Ahmar, and another headed by Ghadr al-Sharaabi, who is a supporter of Abdo Farhan, known as Salem, advisor to the Islahi commander of the Yemeni army’s Taiz military axis. These gangs extort money from shops, seize land and take control of abandoned houses belonging to people who had fled the area.

Islah is the strongest party and the major political and military decision-maker in the governorate. The commander of Taiz military axis Khaled Fadel, the head of the axis’ operations Adnan Zureiq, director of the Taiz police Mansour al-Akhali and the director of political security (an intelligence agency) Abdul Wahid Sarhan are all Islah loyalists. Most military brigades are under the control of Islah even if their commanders are not affiliated with the party. This was accomplished through changes to the axis’ organizational structure, including the formation of a new military brigade consisting of Islah supporters, the integration of Islah loyalists into existing military brigades, the promotion of Islah members in the military and the awarding of military ranks to Islah-affiliated individuals who were not legally in the army.

Abdo Farhan (Salem), who is affiliated with Islah and who is considered the strongest figure in Taiz, has effective military status although officially he’s just an employee in the ministry of education. Salem is one of the most important figures that Islah relies on to keep the army under its control in Taiz. On the political level, two figures are significant in terms of decision-making: Abdulhafedh al-Fakeeh, head of the Islah branch in Taiz; and Ahmad al-Qumairi, a prominent member of the party. Al-Fakeeh and Qumairi manage, in consultation with other political parties – namely the Socialists, the Nasserists and the General People’s Congress – are primary figures in managing settlements to political disputes and deescalation between the various groups in the governorate. Al-Fakeeh lives in Taiz city while Qumairi is based in Riyadh.

In December 2019 Adnan al-Hammadi, the prominent military commander of the 35th Armored Brigade, was killed in Taiz. The assassination came after a series of quarrels between Islah and the 35th Armored Brigade and an incitement campaign against the latter in Islahi circles and media outlets close to the party, which served to increase polarization in the governorate. The main point of tension between the two is the 35th Brigade’s control of Al-Turbah in the strategic Al-Hujariah area, through which runs the only road in and out of Taiz city not under Houthi siege. The 35th Armored Brigade is supported by, but not beholden to, the UAE, which opposes Islah due to its affiliation with political Islam generally and the Muslim Brotherhood specifically. The UAE has backed rival groups to Islah across Yemen. Islah, in turn, views the 35th Brigade as a threat to its chances to control not just the city of Taiz but the entire governorate.

Besides the UAE, Taiz has witnessed increased activity by other regional parties. Qatar, which has been in a bitter dispute with Saudi Arabia since mid-2017, has been most visible in this regard with its backing of popular resistance leader Sheikh Hammoud al-Mekhlafi, with Oman also playing a facilitating role for this support. An Islahi, Al-Mekhlafi first emerged as a rebel leader in Taiz during fighting between local forces and government troops loyal to then-President Ali Abdullah Saleh during the 2011 uprising. He was among the first to lead the local resistance to the Houthis in 2015 and later took on a role as a local mediator in the city. In August 2019, Al-Mekhlafi, who is based between Muscat and Istanbul, called on fighters deployed on the Yemen-Saudi border to join a military camp in Taiz and capture the rest of the governorate from the Houthis. However, this call was widely viewed as a mobilization against the forces of Tariq Saleh – who is supported by the UAE – that control the coastline and the city of Mokha.

The camp was established in Yafrus, south of Taiz city in an area controlled by the Islah-affiliated 17th Brigade, and hosted around 5,000 fighters. However, Taiz’s political parties, most notably Islah, condemned Al-Mekhlafi for establishing the camp illegally – a move that aimed to appease Saudi Arabia. The fighters subsequently left the camp but anecdotal evidence suggests this fighting force was redeployed across Taiz city. The funding of Al-Mekhlafi’s forces appears to be the boldest Qatari move to date to display armed public influence in Taiz, and indeed all of Yemen.

These current complications reflect how thorny the situation is in Taiz, and it is unlikely that the precarious political and security situation will improve in the short term. Unless the Houthis — who in 2020 have restarted military offensives on more than one front — renew attacks in Taiz, then the nature of conflict there will remain defined by local competition among the anti-Houthi ranks. This struggle reflects the government’s ongoing crisis of legitimacy amid division among its ostensible allies, in addition to competition among regional powers to influence the conflict.

Maged Al-Madhaji is a co-founder and executive director of the Sana’a Center for Strategic Studies. He tweets at @Malmadhji.

Where is Saudi Arabia Headed in Yemen?
March 6, 2020 Analysis

Founder’s Death a Blow to AQAP, but not Fatal
March 5, 2020 Analysis

The End of AQAP as a Global Threat
March 5, 2020 Analysis