A Gendered Crisis: Understanding the Experiences of Yemen’s War 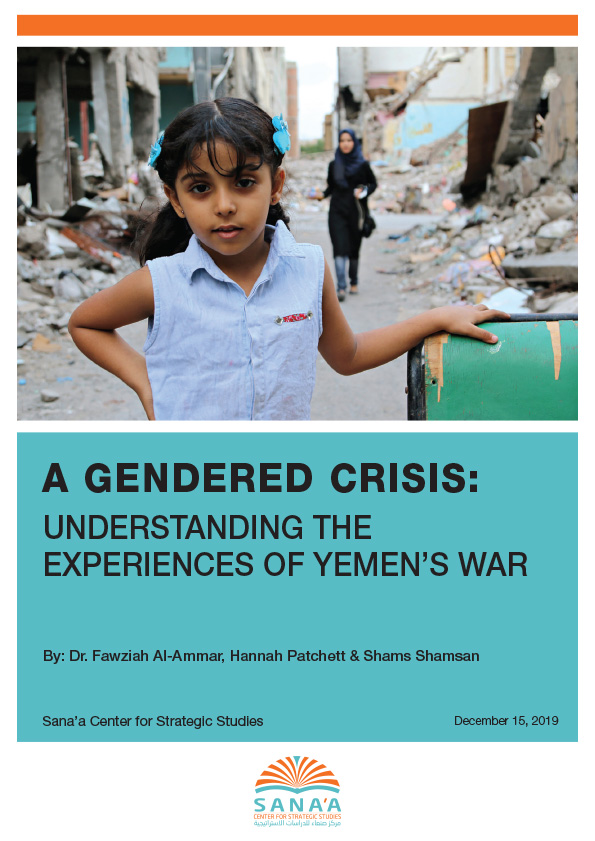 Few Yemenis have been spared the catastrophic impact of the Yemen War, but prevailing gender norms mean women and girls, and men and boys, have experienced the conflict differently. This report explores how gender norms have shaped Yemenis’ experience of conflict, and how conflict is reshaping gender norms in Yemen.

The report is based on qualitative research, including 88 focus group discussions conducted across Yemen from November 2018 to February 2019, 49 key informant interviews, six case studies and a literature review. The focus group discussions included 674 participants in eight districts representing different political and socio-economic contexts — near and far from the fighting and on both sides of the frontlines. These were: Al-Sabeen and Bani Harith in Amanat al-Asimah, Sana’a city; Mukalla and Sayoun in Hadramawt governorate; Sheikh Othman and Seera in Aden governorate; and Al-Shamayatan and Al-Qahira in Taiz governorate.

Focus group discussion participants and key informants in all areas perceived that financial strain has pressed women into the workforce, severely impacted boys and girls in terms of access to education and vulnerability to gender-based violence, and driven a rise in multiple forms of gender-based violence.

Prior to the current conflict, around half of Yemenis lived in poverty and more than 40 percent were food insecure.[1] The economy contracted by more than 40 percent during the first three years of the war,[2] with many businesses collapsing or downsizing. More than 1.2 million public sector workers — and their families — were affected by the suspension of government salaries in September 2016.[3] Unemployment and underemployment, as well as salary suspensions and the depreciation of the Yemeni rial, have dragged the middle class toward or into poverty and those already in poverty into destitution. While payments to some public sector workers have resumed, some 20 million of Yemen’s 28 million people continue to face severe or acute food insecurity.[4]

Focus group discussion participants and key informants perceived women and men as having navigated the country’s new economic reality differently. Many said women were generally proactive and creative in seeking paid work, while some men were reluctant to work in jobs they considered unsuitable or were pressured – economically and by traditional definitions of masculinity — into joining fighting forces to support their families.

Some participants and key informants in all areas noted more positive male attitudes emerging during the war toward women working, saying, for example, that men increasingly seek brides who are employed in contrast to a pre-war tendency toward seeking a housewife. Indications were more mixed, however, as to whether women’s economic empowerment was expanding their influence in family decision-making or would last beyond the conflict – indicating an area where post-war support could be critical.

In exploring the gendered consequences of the conflict on Yemen’s youth, this report finds that the prospects of a generation of Yemeni boys and girls as well as young adults have been compromised by the conflict-driven devastation of education. War-related economic and security factors are magnifying the societal problem of early marriage, especially among girls, and are driving boys out of school and into the ranks of fighting forces.

Prior to the conflict, poverty and lack of access to schools in rural areas had limited families’ abilities to educate their children, and war has only compounded this problem. Yemenis report having to choose between feeding or educating their children, being unable to afford transport costs or school needs such as uniforms and books. With teachers unpaid or the value of their salaries depreciated by rampant inflation, many lack motivation, are preoccupied with securing extra outside income or have joined frontlines. Stress due to the war and economic collapse has affected teachers’ behavior toward students, and students report to class hungry and displaying symptoms of trauma.

War is also magnifying existing gender and power inequalities that lie at the root of gender-based violence (GBV). The imprecision and scarcity of baseline statistics on GBV in Yemen complicates efforts to identify trends, however participants and key informants perceived that the incidence of multiple forms of physical and sexual violence had increased during the conflict in the home and in public spaces. Focus group participants recounted incidents of rapes of girls and boys, within families, in schools and by armed men from security forces and militias. Participants and key informants also perceived increases in kidnappings, groping and verbal harassment of women and girls, and frustration was evident at what some participants said was growing impunity for perpetrators. Participants in all governorates said the absence of a functioning state had reduced access to justice for victims of physical and sexual violence. In addition, social protections against GBV had diminished, they reported, and a general rise in violence and weapons proliferation left bystanders afraid to intervene.

This report focuses on the gendered experience of the war in terms of the economic crisis, which was widely perceived to have magnified other existing domestic and societal issues facing women, girls, men and boys. It also looks closely at the gendered experience of the war on Yemen’s youths – boys and girls as well as young adults – and on the nature and, as much as possible within the limitations of the study, the extent of physical and sexual violence at home and in the community.

The following emerged as the key perceptions of focus group participants and key informants:

Recommendations are offered at the end of this report to guide domestic and international stakeholders to help alleviate the war’s varied impact on women, girls, men and boys. They are aimed at improving immediate situations, economically and in terms of reducing gender-based violence and trauma within families, in schools and in communities. Several recommendations also aim to stabilize families and to capitalize on women’s economic gains that have occurred during the war. They also seek to address necessary changes to basic legal, political and social elements that would help address deeper gender-based discrimination and violence – and improve the likelihood any empowerment gained during harsh years of war will be sustained in times of peace and rebuilding.

The Sana’a Center Editorial The Brinksmanship of a SAFER Dis… October 14, 2019 The Yemen Review