In January, the UN Special Envoy to Yemen Ismael Ould Cheikh Ahmed entered a period of shuttle diplomacy in an attempt revive the same peace proposal he’d put forward in December 2016 – a proposal Yemeni President Abdu Rabbu Mansour Hadi had at that time flatly rejected. The UN 2140 Sanctions Committee’s Panel of Experts reported last month that neither side in the conflict has “demonstrated sustained interest in or commitment to a political settlement or peace talks”, while pro-Hadi forces appear poised to further capitalize on recent battlefield advances.

UN Emergency Relief Coordinator Stephen O’Brien said the Yemeni conflict is driving the single largest food insecurity crisis in the world and warned of the likelihood of famine in 2017; simultaneously the UN and humanitarian partners launched the largest ever international humanitarian appeal for Yemen: US$2.1 billion to provide life-saving assistance to some 12 million people.

A continuing liquidity crisis has left most civil servants – approximately one-third of employed Yemenis – without salaries for a fifth month in a row, while disparate efforts by President Hadi’s government and the Houthi-Saleh alliance to address the liquidity crisis threaten to further undermine the rial’s value.

US President Donald Trump’s also took office in January and authorized his first foreign policy actions related to Yemen. These included a US Navy SEAL raid on a suspected Al Qaeda in the Arabian Peninsula compound in the Al-Bayda governorate. The raid left 25 civilians dead, including 9 children under the age of 13. Also killed were 14 AQAP members and one SEAL commando, while four SEALs were injured and a $70 million US Navy aircraft destroy; the White House Press Secretary called the event a “successful operation by all standards.”

In mid-January the UN Special Envoy to Yemen Ismail Ould Cheikh Ahmed began a new round of shuttle diplomacy. This was an attempt to revive a peace proposal he had put forward in December to bring the fighting to a halt, but which had been rejected by the internationally recognized government of Yemeni President Abdu Rabbu Mansour Hadi. After visiting Riyadh, Doha and Muscat for talks with various government officials, Ould Cheikh Ahmed travelled to Aden to again meet with President Hadi, before also traveling to Sana’a to meet representatives from the Houthi movement and the allied General People’s Congress (GPC), loyal to former President Ali Abdullah Saleh.

Following his meetings with the warring parties, the Special Envoy informed the Security Council during a January 26 briefing in New York that his office had completed preparations for a five-day planning meeting, which will include a workshop for the De-escalation and Coordination Committee (DCC), whose members include representatives from the main warring parties. The aim of the DCC is to develop a joint implementation plan to ensure the success and sustainability of a cessation of hostilities, with Ould Cheikh Ahmed noting that Jordan had expressed willingness to host the planning meeting.

During the briefing the Special Envoy emphasized the immense suffering the conflict has brought the Yemeni people, that with “political courage and will” a resolution is still within reach but that a military solution to the war is not possible.

The UN 2140 Sanctions Committee’s Panel of Experts then met on January 27 to discuss the panel’s report which, among other things, stated that neither side in the conflict has “demonstrated sustained interest in or commitment to a political settlement or peace talks.” The panel also noted that while there had possibly been small-scale weapons shipments from Iran to the Houthis, it had not seen sufficient evidence to confirm any large-scale Iranian weapons shipments.

January witnessed an intensification of fighting on multiple fronts. Pro-Hadi forces, heavily supported by Saudi-led coalition airstrikes, launched attacks in the vicinity of Nehem, east of Sana’a, which, if it fell, would threaten Houthi-Saleh forces’ control of the capital and represent a major strategic and tactical victory for Hadi.

Along the south-western coast of Yemen fighting intensified as pro-Hadi forces launched operation “Golden Spear” to take control of Mocha and by January 30 they had had been successful in capturing large parts of the town and surrounding areas. Heavy fighting continued in central Mocha, where Houthi-Saleh forces withdrew after losing the port. Fighting in and around Mokha has resulted in a large number of civilians being displaced, with the UN estimating up to 30,000 had relocated to safer areas within Taiz or surrounding governorates. A large number of civilians were also trapped within Mokha itself, facing an increasingly dire humanitarian situation.

Given pro-Hadi forces’ military advances in January, and the new administration of U.S. President Donald Trump taking office – which has expressed support for the Saudi-led military intervention backing Hadi – it seems highly likely that Hadi will seek to push the initiative for further military gains, seeking to placing his government in a more advantageous position in eventual negotiations.

Indeed, in an event that was perhaps telling of the UN Special Envoy’s chances of securing a cessation of hostilities in the near-term, on January 30 the building in Dhahran Al-Janoub, Saudi Arabia, from which UN officials and DCC members were meant to monitor ceasefire violations, was itself damaged by rocket fire. In a statement, Ould Cheikh Ahmed expressed regret over the incident while refraining from blaming any side; Saudi news agencies, however, reported that the building had been hit by Houthi Katyusha rockets. 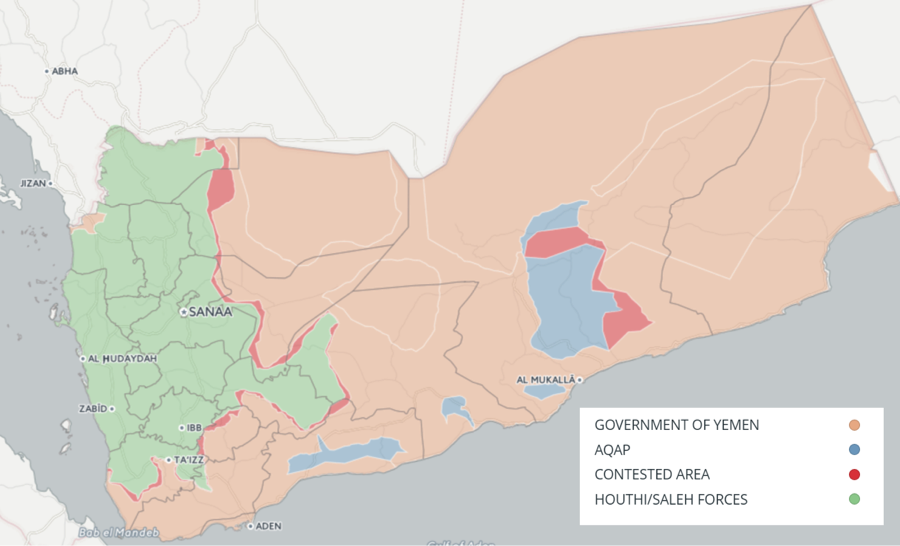 Also in a January 26th briefing to the Security Council, UN Emergency Relief Coordinator Stephen O’Brien said the Yemeni conflict is driving the single largest food insecurity crisis in the world, and warned of the likelihood of famine in 2017 if immediate action is not taken. Twelve days later, the UN and humanitarian partners launched an international appeal for US$2.1 billion to provide life-saving assistance to some 12 million people in Yemen in 2017. It is the largest consolidated humanitarian appeal for Yemen ever.

The UN response plan also warned that the country is in social, economic and institutional collapse. A major contributing factor is that most public sector workers – approximately a third of wage-earning Yemenis – have not received salaries since August 2016 due to a severe liquidity crisis; Yemen is overwhelming a cash economy, and there has been an acute shortage in physical banknotes to pay civil servants.

Early last month, it was reported that a significant shipment of Yemeni rial banknotes arrived from printers in Russia to the Central Bank of Yemen, whose headquarters was relocated to Aden in September 2016. However, it is not clear how quickly this currency would be distributed and to which areas of the country. On the January 24 the CBY in Aden made its first public sector wage payments to civil servants in Houthi-Saleh control areas, though these payments were limited to educational staff. It is important to note that the cash transfer was not completed through the CBY’s own facilities and staff in Sana’a, but rather through an agreement with the private microfinance bank Al-Kuraimi. Authorities in Sana’a have threatened to punish banks cooperating with the Aden based CBY. This, in combination with continued lack of communication between CBY facilities in Sana’a and Aden, presents significant challenges to any future efforts to pay government wages.

Meanwhile, in an effort the circumvent the liquidity crisis themselves, at the beginning of January the Houthi-Saleh authorities in Sana’a directed central bank staff at the former CBY headquarters in the capital to explore the possibility of implementing a cashless electronic payment system using mobile phones. Central bank staff have since been examining the successful rollout of a similar model that was implemented in Kenya.

Both efforts to address the liquidity crisis have raised concerns, however, regarding a further devaluation of the Yemeni rial, given that neither the Hadi government in Aden nor that Houthi-Saleh administration in Sana’a has secured significant foreign currency reserves to back an increased supply of domestic currency. The black market exchange rate for the rial at the end of January was roughly YR330 to the US dollar, compared to YR215 to the US dollar when the Saudi-led intervention began in March 2015.

On January 20, Donald Trump was inaugurated as the 45th President of the United States, and between then and the end of the month his office authorized at least six US drone strikes aimed at suspected Al Qaeda in the Arabian Peninsula (AQAP) operatives in Yemen.

A week after his inauguration, President Trump signed an executive order barring citizens from seven predominantly Muslim countries, Yemen among them, from entering the United States; a US federal judge and appeals court later suspended the Trump’s immigration order. Two days later after the signing of the order, on January 29, US Navy SEALs conducted a raid on a village in the Al-Bayda governorate. Death tolls vary slightly, however villagers report 25 civilians killed, including 9 children under the age of 13; AQAP reported 14 members killed. A US Navy SEAL commando was also killed, four wounded and a $70 million US Navy Osprey aircraft was destroyed. White House Press Secretary Sean Spicer dubbed the event a “successful operation by all standards.”

The navy destroyer USS Cole was then ordered to patrol Yemen’s Red Sea coast to help protect shipping lanes in the Bab Al Mandeb strait, following a Houthi attack on a Saudi frigate using a “drone boat” at the end of January. On February 3, National Security Advisor Michael Flynn issued a statement on Iran through the White House press secretary in which he described the Houthis as one of Iran’s “proxy terrorist groups.”

This is the first time a US administration has called the Houthis a “terrorist” group. Should this shift in language, and perhaps policy, outlast Flynn’s time in office, it has the potential to complicate Washington’s future engagement in the conflict; the newly minted National Security Advisor was forced to resign amid controversy after just 24 days, the shortest tenure in the 63-year history of the office.

Yemen at the UN is a monthly report produced by the Sana’a Center for Strategic Studies to identify and assess UN-led efforts to resolve the crisis in Yemen. Through this analysis, Yemen at the UN aims to provide readers with an understanding of the international political context that accompanies developments on the ground.