Islah Wary of a Hadi Reconciliation with the STC

STC forces withdraw toward Aden from the Sheikh Salam front on December 14 as part of the implementation of the Riyadh Agreement's mutual redeployment of forces in Abyan. // Sana'a Center photo by Ahmed al-Shutiri 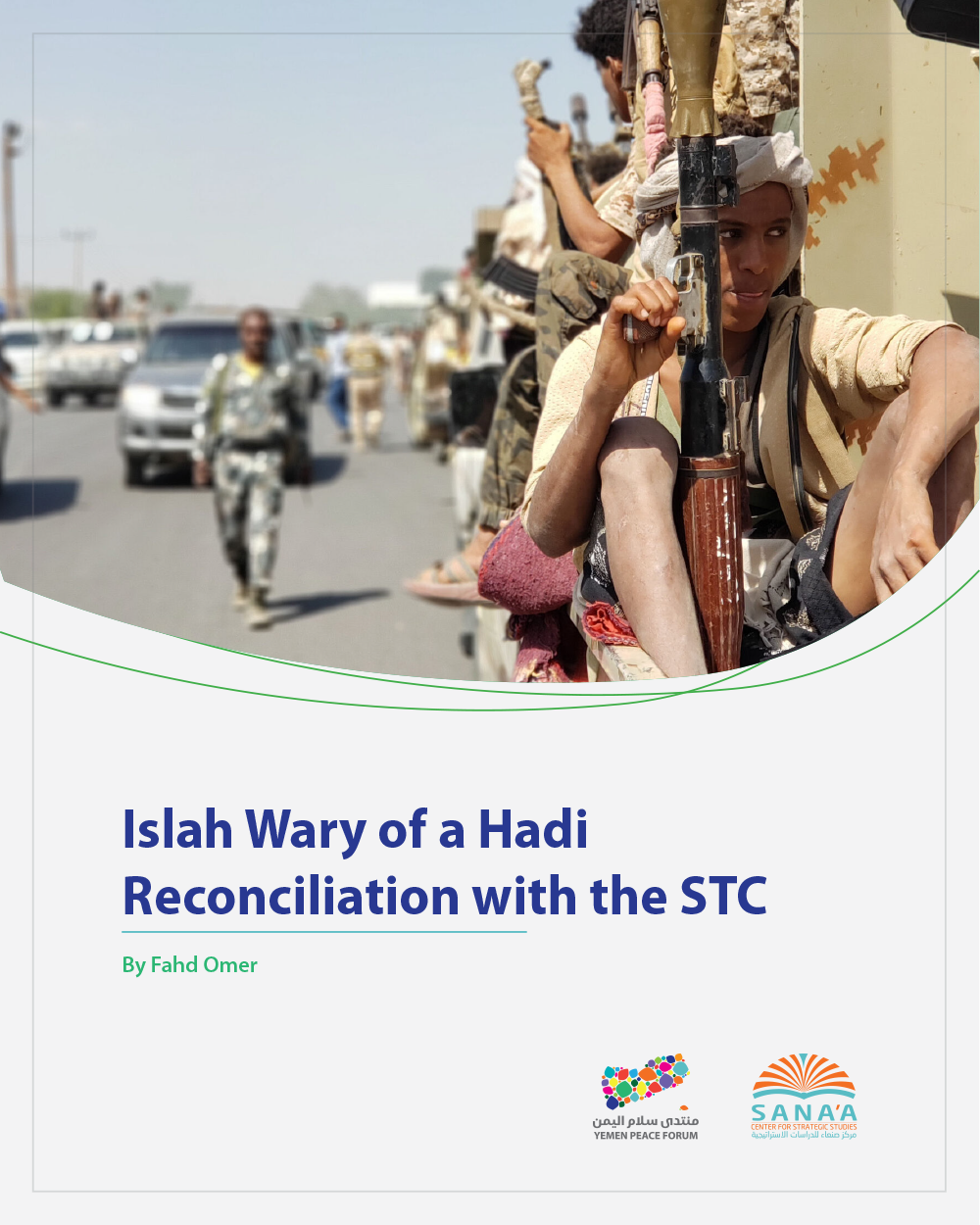 Editor’s note: The author, a Yemeni researcher, is writing under a pseudonym for security reasons.

On December 11, Yemeni government and Southern Transitional Council (STC) forces began withdrawing from frontlines in Abyan governorate. The redeployments – first stipulated in the Saudi-sponsored Riyadh Agreement signed in November 2019 but implemented more than a year later than scheduled – are set to be followed by the imminent formation of a new Yemeni government that includes STC figures.

Movement to implement the agreement following months of stalemate comes at a time of acute vulnerability for Yemeni President Abdo Rabbou Mansour Hadi. With government forces having been engaged in a two-front war – against the armed Houthi movement in the north and Southern Transitional Council (STC) in the south – for most of the past year, the president has appeared generally incapable of facing down these challenges to his authority. These rival groups, meanwhile, have sought to depict Hadi as a weak and ineffective leader, which has undermined the standing of the internationally recognized government that he leads.

Confidence in Hadi among his allies also appears to be wavering. In particular, the Islah party has been acting with increasing independence in the past few months to defend its interests and gains in areas where it holds sway. The looming realization of the power-sharing deal with the STC may be viewed by Islah as yet another concession by Hadi to rivals – one that could leave Islah more vulnerable and potentially cause it to strike out further on its own.

Struggle for the South

Since its formation in May 2017, with full-fledged support from the United Arab Emirates, the STC has sought to establish a unified social, political and military force with the aim of regaining independence for South Yemen. It moved to assert its grip over Aden by forming an alternative legislature, the Southern National Assembly, establishing military camps, and seizing control of Aden’s strategic ports. Two rounds of military confrontations with Yemeni government forces in the city, in January 2018 and later in August of 2019, ended with the STC cementing its control of Aden and ejecting the government from its interim capital.

The loss of Aden and the spread of fighting to other southern governorates raised the specter of a new protracted civil war within the wider Yemen conflict, and put a renewed focus on Hadi’s legitimacy. This perception of legitimacy is critical because it was Hadi, in his capacity as head of state, who requested international assistance to drive back the Houthi movement in 2015. In response, Riyadh, worried that the legal cover for the Saudi- and Emirati-led military intervention in Yemen could be compromised, moved to sponsor talks and broker a peace agreement between the government and STC. Known as the Riyadh Agreement, Hadi accepted the sharing of power and decision-making with the STC in exchange for his government being allowed to return to Aden and the STC-aligned military and security forces being integrated under the government’s Defense and Interior ministries.

When it came to implementing the agreement on the ground, however, progress has proven elusive. Mistrust has reigned between the two sides, with particularly vitriolic exchanges between the STC and Islah. Islah is affiliated with the Yemeni branch of the Muslim Brotherhood; the UAE, the STC’s main backer, has sought to combat the influence of the Islamist movement across the Middle East. Thus, translating the agreement into action requires effort, agility, and diplomatic strength on behalf of the government to ensure that the agreement comes into effect, with backing from regional allies and the international community.

President Hadi, however, lacks such leadership qualities. He was unable to mobilize his Presidential Guard after Houthi fighters, allied with forces loyal to former President Ali Abdullah Saleh, marched into Sana’a in September 2014. Following this humiliation, the Houthis pressured Hadi into signing the Peace and National Partnership Agreement, which provided cover for their military takeover. Years later, following the loss of his second capital, Aden, he was cornered into signing another agreement with longtime southern rivals.

As the Riyadh Agreement remained unimplemented throughout most of 2020, the STC has been seizing every opportunity to take advantage of Hadi’s weakness. As a result, the Yemeni government has found itself checkmated in some areas and threatened in others. In April, the STC announced its intention to institute self-rule across the former South Yemen. In June, STC-aligned forces took over the island governorate of Socotra, drawing little more than faint protest from the Hadi government. In July, the STC staged a large anti-Hadi demonstration in the coastal city of Mukalla in Hadramawt. On several occasions, the group temporarily suspended its participation in talks aimed at implementing the Riyadh Agreement.

These STC gains provided additional leverage in negotiations with the government. Its decision in July to publicly abandon its earlier self-rule declaration came only after Hadi’s government was pushed to sign amendments demanded by the STC to the first version of the Riyadh Agreement. The same month, Hadi appointed a new Aden governor and police chief, both of whom are STC-affiliated. This appeared as a concession to the STC’s demand that political aspects of the Riyadh Agreement be implemented before military ones, while the Hadi government has publicly insisted on the opposite.

During Yemen’s most-critical times in his extended presidential term, Hadi has routinely conceded power and influence to rivals and opponents of his government.  The STC appears to have bet that this trend will continue.

These persistent challenges faced by Hadi and the Yemeni government appear to have left other parties within the government increasingly wary. Ahmed bin Dagher, deputy chairman of the General People’s Congress (GPC) party and a presidential advisor, characterized the GPC’s participation in the Riyadh Agreement’s government-formation talks, despite reservations, as an attempt to save “the legitimacy”. In addition, Bin Dagher also criticizes foreign actors’ interference in the process, which highlights his and the GPC’s worries about the Hadi government’s shrinking international credibility.

Islah, one of the largest political parties in Yemen and currently seen by many to be Hadi’s main ally, is likely to face more risks and challenges moving forward than any of the other few allies Hadi has left. Islah is one of two main political actors that has shaped the sociopolitical landscape in Yemen for more than two decades. Its partial dependency on Saudi Arabia, and Hadi’s utter dependency on the same monarchy, brought the two sides together, especially after March 2015. The president needed Islah’s popular presence, social and political influence in different parts of Yemen (especially in the middle and northern parts of the country), and its experience in co-ruling Yemen during Saleh’s tenure, to help him maintain his image before the international community as the one and only recognized and legitimate president of a democratic Yemen. Similarly, Islah undoubtedly needed Hadi’s flag to regain strength and push back against the Houthi-Saleh military offensive, especially in its strongholds of Taiz and Marib, and to maintain and protect its economic and commercial interests.

While Islah and Hadi have had their issues, their relationship has endured, with each viewing the other as a lesser of two evils. The president substantially weakened Islah when he, intentionally and prompted by some regional powers, overlooked Houthi forces attacking and seizing Islah camps and strongholds in Amran governorate in 2014. Islah’s presence has also been used as a pretext, by the UAE and non-state actors such as the STC, to undermine the credibility of Hadi’s government. In 2018, when then-Yemeni prime minister Bin Dagher defied an Emirati attempt to extend its influence on Socotra, the UAE and its local allies accused the Muslim Brotherhood, by which they meant Islah, of directing the prime minister’s actions. Similar accusations related to Muslim Brotherhood influence were employed by STC forces two years later ahead of their seizure of the island.

UAE-backed forces in Yemen are attempting to make political and military gains at Islah’s expense. Politically, through the Riyadh Agreement, the STC is seeking to limit Islah’s influence and presence in a future government. On the military side, Islah’s strongholds in Taiz city and the governorate are under pressure. In July, this prompted Islah-affiliated commanders to send the Taiz Military Axis, the largest military grouping in the governorate, which incorporates the bulk of Taiz popular resistance sub-groups, against the UAE-backed 35th Armored Brigade in a security campaign in areas south of Taiz city. Meanwhile, the presence of the Joint Forces led by Tareq Saleh, the coalition-backed nephew of former President Saleh who refuses to recognize the legitimacy of Hadi’s government, in the strategic port city of Mokha along Taiz’s Red Sea Coast looms as a potential future threat to Islah in the governorate.

Observing Hadi’s diminished legitimacy and influence, Islah seems to be preparing for a new round of potential confrontations – it has recruited hundreds of new fighters and established several new military camps in Taiz outside of Yemeni government supervision in 2020 – even as the Yemeni government negotiates with the STC and moves toward implementing the Riyadh Agreement. Perceived concessions toward Islah’s rivals may push it to act more and more as an independent, non-state actor, threatening to further divide an already fragmented Yemeni state.

The Yemen Peace Forum initiative is a track II youth and civil society platform facilitated by the Sana’a Center and funded by the Dutch Ministry of Foreign Affairs. This interactive initiative seeks to invest in building and empowering the next generation of Yemeni youth and civil society actors and to engage them in critical national issues. Building on the Sana’a Center’s core goal of producing knowledge by local voices, this initiative seeks to develop and invest in young policy analysts and writers across Yemen.