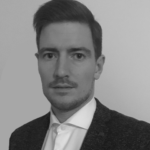 Anthony Biswell is an economic analyst at the Sana’a Center. Prior to joining the Center, Anthony was the Senior Yemen Analyst for The Delma Institute in Abu Dhabi, managing research projects and advisory programs, as well as training and mentoring junior analysts. Previously, he worked as an editor and researcher for IHS in Yemen, where he was based in 2010 and 2013-2014.

Biswell holds an MA in International Conflict Studies from King’s College London and a BSc in Politics from Cardiff University.

In January 2020, demonstrators heckled a delegation of bankers leaving Lebanon’s central bank. This was not an uncommon occurrence – protests targetin…

Yemen’s Fate Hinges on the Economy

Since September 2016, competing branches of the Central Bank of Yemen (CBY) have operated from either side of the frontlines in the country’s ongoin…

By: Rafat Al-Akhali, Osamah Al-Rawhani, Anthony Biswell This policy brief offers recommendations to maximize the effectiveness of governance in …