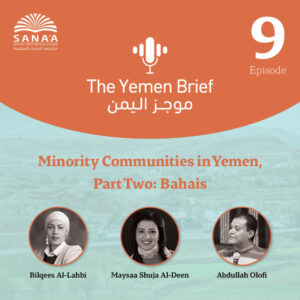 The Ba’hai faith is one of the world’s youngest major religions, emerging from the cultural and philosophical context of Shia Islam in 19th century Persia. Adherents reached the Yemeni islands and coast soon after, and today there are approximately 2,000 Ba’hais in the country.

But the group has been systematically persecuted in Iran, and have been increasingly targeted in Yemen since the 2011 revolution, and especially after the armed Houthi movement seized the capital in 2014. Dozens of Baha’is have been arrested on spurious, imprisoned and denied due process during trials that have, in some cases, resulted in the death penalty.

Sana’a Center Researcher Bilqees Al-Lahbi talks to Maysaa Shuja al-Deen, a Sana’a Center Senior Researcher, and Abdullah Olofi, a Social Researcher and Human Rights Advocate specializing in minority rights, about their research on the Baha’i community in Yemen. Maysaa and Abdullah contributed to a recent Sana’a Center report tracing the origins of the faith and its arrival in Yemen, and interviewed Ba’hais both inside and outside and outside the country regarding increasing persecution and the impact of the war on Ba’hai communities.