The Yemen Brief Podcast | Episode 5 | The Saudi Blockade of Yemen 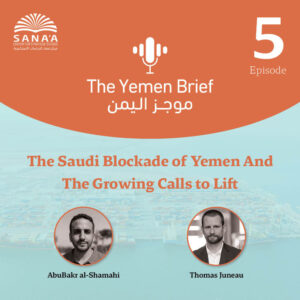 As the Yemeni war drags on and the humanitarian crisis deepens, there have been growing calls for the United States to end its support of the Saudi-led intervention and its blockade of Houthi territories.

The maritime and air blockade is cited by critics as a driving factor of the deteriorating humanitarian situation and food insecurity plaguing the country. But the situation is complex.

Food and fuel still enter Houthi territory, and it is unclear whether lifting the blockade alone would alleviate suffering or simply provide support for the Houthi war economy and state-building project and improve its military capacities.

AbuBakr al-Shamahi talks to Thomas Juneau, Associate Professor at the University of Ottawa’s Graduate School of Public and International Affairs and a non-resident fellow at the Sana’a Center about the Saudi-led coalition blockade, growing calls to lift it, and the consequences that might result.

Juneau is the author of recent Sana’a center article on the blockade and the potential fallout of its reconfiguration. The Yemen Brief Podcast is the place to turn for informed insight about Yemen and the surrounding region. This podcast is a Sana’a Center production.