The Yemen Brief Podcast | Episode 7 | What Would Talks Between Iran and Saudi Arabia Mean for Yemen? 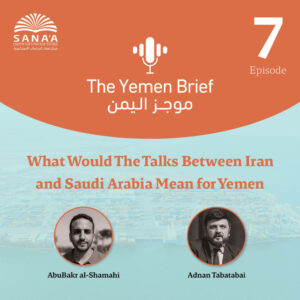 Iran and Saudi Arabia have long been cast as Gulf rivals. In their relationships with the West and their support for actors in Syria, Iraq, and Lebanon, they have long stood on opposing sides of regional conflicts and international security and energy policy.

The Saudi-led coalition’s intervention in Yemen in 2015, and Iranian military support for the Houthi movement, see the two sides inhabiting familiar roles. But recent security talks in Baghdad may augur a shift both in the bilateral relationship, and on the sides’ respective roles and policies in Yemen.

AbuBakr al-Shamahi talks to Adnan Tabatabai, co-founder and CEO of the Germany-based Center for Applied Research in Partnership with the Orient (CARPO) and an Iran analyst, on whether anything has changed after the talks, and what a reconfiguration of the security relationship would mean for Yemen and the wider Middle East. Tabatabai is the author of a recent Sana’a Center commentary on the talks on their repercussions.